Not all paddlers were steamers - and some were at D-Day!

Though paddle-vessels are almost invariably referred to as “paddle steamers”, some had distinctly more modern forms of propulsion. I found this somewhat of a surprise recently when, in the process of researching 19th Century paddlers, I came across a layout drawing – as shown here – from the mid-1930s. This shows the world’s first diesel-electric propelled paddle vessel, the Talisman. She was designed for service on the Clyde and owned by the London and North Eastern Railway. She was commissioned in 1935 and served until 1966, being based at Craigendoran and sailing to Dunoon, Rothesay and the Kyles of Bute.

Talisman's most dramatic service was however during WW2 when she was impressed into the Royal Navy as HMS Aristocrat. She served not only as an anti-aircraft ship but as a headquarters command ship during the D-Day landings in 1944. It’s hard to imagine such a peaceful looking vessel acting in a warlike role! 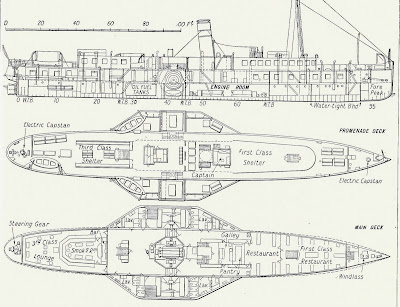 There are several good photographs of her on http://www.paddlesteamers.info/Talisman35.htm but I have not included them as they appear to be copyrighted. If you are interested however they are well worth viewing.

A first-hand account of HMS Aristocrat’s service off the Normandy beaches can be found on: http://www.bbc.co.uk/history/ww2peopleswar/stories/75/a2717075.shtml
Posted by Antoine Vanner at 09:34