Today August 1st, one hundred years ago in 1914, Germany also ordered mobilisation and declared war on Russia, a step that made war with France inevitable, and so also drawing in Britain. 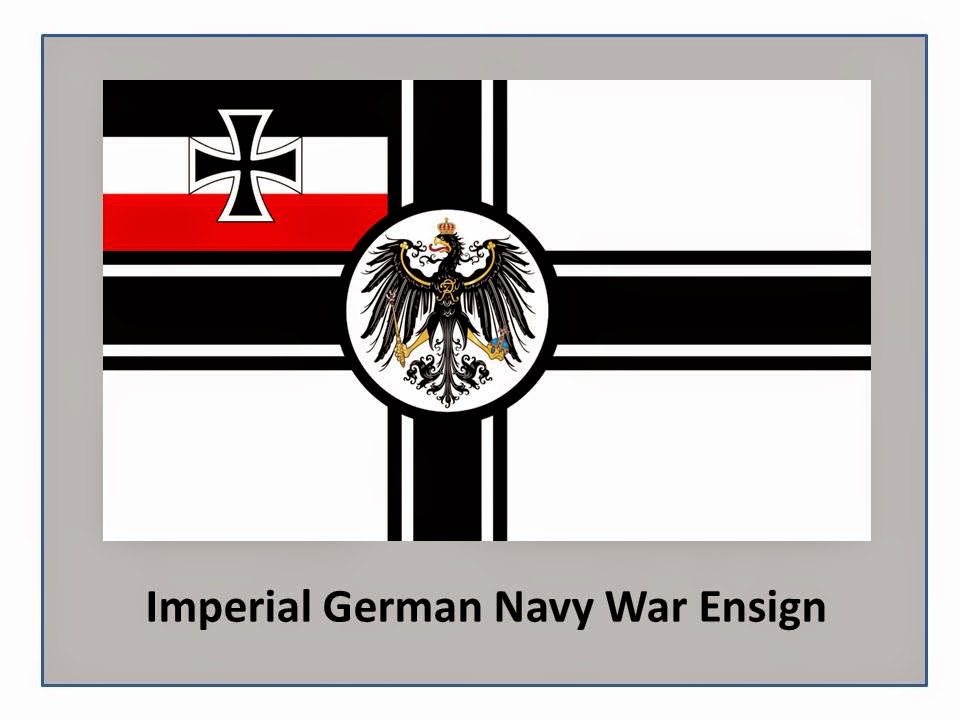 In my previous blog this week I described the movement of the Royal Navy’s First Fleet – later called the Grand Fleet – to its wartime stations on July 29th  even before war was declared. Today I want to cover the makings of a disaster for the Imperial German Navy that had all the inevitability of a Greek tragedy. This was made unavoidable by deployment of vessels outside German waters, but with inadequate logistic and maintenance support, just before war broke out. The vast majority of German’s naval strength was concentrated in bases on the North Sea and in the Baltic, with the Kiel Canal offering easy movement between them. In the first months of the sea war that was just about to break out the most dramatic events were however not associated with these areas but with smaller German forces elsewhere.
Germany had only recently acquired colonies worldwide, the largest being in South West Africa (modern Namibia), Tanganyika (modern Tanzania) and Northern New Guinea (now part of Papua-New Guinea). Smaller colonies were Togo and Cameroons in West Africa, a number of Pacific Island groups (the Bismarck Archipelago, Solomons, Marianas, Carolines, Marshalls and German Samoa) as well as a naval base on land leased from the Chinese government at Tsingtao (now Quingdao) on the  coast of the Yellow Sea. Extensive as some of these territories were in area the degree of German settlement in them was very limited – the total German population in them may have been lower than the number of German citizens then living in France.
Heavy investment has been made by Germany in cruisers suited to overseas deployment, not only for colonial protection but for “guerre de course”, operations against enemy merchant shipping. The weakness of this global strategy was however that German lacked the network of bases and coaling stations required to keep such vessels at sea for long periods. Tsingtao represented the only fortified base and the anchorages at the various German colonies between the homeland and China were essentially undefended and indefensible. The problem was not significant in peacetime, when German vessels could take on coal and supplies at third-party ports, but under wartime conditions the situation was likely to deteriorate. Reliance was placed on supplying coal by merchant colliers impressed into naval service and rendezvousing with German warships either at sea or at remote locations. The process of transferring coal was a laborious one at the best of times and doubly so in open waters, when weather could prelude it completely. Radio was still in its infancy and the ranges for transmission and reception were still low, taking coordination of such logistics all but impossible. The necessity and availability of maintenance facilities, including dry docks or floating docks, was not addressed.
In the opening months of the war the German overseas naval forces – which were not insignificant - were to be swept from the map, though not, in some cases, without inflicting substantial losses on their adversaries. In retrospect however the strategy involved can be seen to have been doomed to failure and the surprising fact is that the inherent weaknesses were not recognised beforehand.
What then were the German overseas deployments on the eve of war with Britain?

The 25,300 ton battlecruiser Goeben and the 5,590 ton light cruiser Breslau. Unable to leave the Mediterranean once war with Britain meant escape via Gibraltar or the Suez Canal being blocked, the only alternative was to run for Turkey, which was likely to shelter them. The consequences of this decision changed the history and power-balances in the Middle East and the consequences are still with us today.
In the Pacific:

The German East Asiatic Cruiser Squadron the largest and most powerful German naval force overseas and was the only one to have a  fortified base – Tsingtao – to fall back on. This squadron was however outnumbered from the start by British, French, Russian and, most decisively, Japanese fleets in the area. Early moves by Britain and its ally Japan to besiege Tsingtao, which in due course they were to capture, showed that no reliance could be placed on retaining it as a base. The squadron was in due course to cross the Pacific, fighting a successful battle with British forces on the way, at Colonel, off Chile, and to break into the Southern Atlantic. Here it was to be met, and destroyed, at the Falkland Islands by superior British forces.
The squadron consisted of the following: the sister 12,781 ton armoured cruisers Scharnhorst & Gneisenau, the 3,756 ton light cruiser Leipzig, the light cruiser 3,814 ton Nürnberg, the 4,268ton light cruiser Emden, later sent for commerce raiding in the Indian Ocean. This latter proved especially successful in her role, though in due course she too was run down and destroyed. The small old 1,590 ton gunboat, Geier, was at Singapore but she managed to escape to Hawaii, where she was interned, being taken into US service as the USS Schurz in 1917.

The 14,349 ton passenger liner Kaiser Wilhelm der Grosse was operating as an “armed merchant cruiser”, carrying six 4.1-in guns. This gigantic 650-ft long vessel, launched in 1897, was one of the largest liners launched up to that time and had held the “Blue Riband” for a fast Atlantic crossing. Fuel-hungry, unarmoured and massively under-armed it is hard to see how she could ever have been expected to operate independently, or to be able to survive battle with even a small warship . In the event she could not – and was sunk within a month by an obsolete British cruiser.
In the Caribbean:

The new and fast 6,191 ton light cruiser Karlsrühe, was to operate with some success against British merchant shipping until she was destroyed by an accidental internal explosion.
The 4,268 ton light cruiser Dresden was sent initially to the South Atlantic, then over into the Pacific, to join Admiral von Spee’s East Asia Squadron.
Off East Africa:

The 3,814 ton light cruiser Königsberg was to sink an old British cruiser, HMS Pegasus, before taking refuge in the swamps of Tanganyika’s Rufigi Delta. Destroying her there was to require mobilisation of a massive British naval force.
With the exception of the newly built Karlsrühe, the light cruisers were all generally similar, though belonging to several different classes. Length was typically some 380 ft. The oldest, the Leipzig, had been launched in 1905 and they were “protected cruisers”, with their machinery and magazines located beneath a sloped armoured deck and typically in the 3,000-4,000 ton displacement. Only Dresden and Karlsrühe were powered by turbines, the others having reciprocating engines. Power was in the 12,000 to 15,000 ihp range and the maximum speeds were, nominally, ranged from 22 to 25 knots. Given the long periods these ships were to spend at sea performance was to be considerably lower. This was a major factor when the East Asiatic Squadron was to be chased, and run down, by British forces in the Battle of the Falklands. It is notable that only the Dresden was able to show her enemies a clean set of heels in this action so as to survive a few months longer. Ten 4.1” guns (12 in the Karlsrühe) was the standard armament, plus  two submerged 18” torpedo tubes.
The 12,781 ton armoured cruisers, Scharnhorst & Gneisenau, were much more formidable vessels, both launched in 1906, 470 ft. long and carrying heavy side armour. Considered “Crack gunnery ships”, they were armed with eight 8.2” guns, six 5.9”, eighteen 3.4 “ plus smaller weapons. They carried four submerged torpedo tubes. Their performance against a weak British squadron at Coronel, off the Chilean coast, was to be lethally efficient and when confronted with ships more powerful than themselves at the Falklands, they were to die very hard indeed.
By the end of 1914 only Dresden still survived, hiding in Pacific island anchorages and doomed, like her sisters, to destruction  few months later.
Germany’s overseas naval forces had fought well, and had inflicted some damage, but they were, from the start, doomed by faulty strategy. It is notable that they waged a "clean war", being scrupulous in holding to the accepted laws of war of the time and did their utmost to avoid civilian casualties on the merchant ships they captured. Captain Mueller of the Emden was hailed as a chivalrous foe in Britain and there was similar respect for Admiral von Spee, commander of the East Asiatic Squadron. It was only with the advent of submarine warfare that a new savagery became a feature of the conflict.

It was nearer home, in the North Sea, and in the U-Boat haunted wastes of the North Atlantic, that Germany’s real naval war was to be fought. It was going to be merciless and unrelenting, with no time for chivalry or compassion, a foretaste of even worse to come a quarter century later.