The First of the White Rajahs of Sarawak

I’m currently in Sarawak, the portion of Malaysia that lies on the north coast of Borneo. It stretches some 450 miles, roughly south-west to north-east, bordered northwards by its long coast along the South China Sea and southwards by its frontier with Kalimantan, the larger part of Borneo that belongs to Indonesia. With an area of some 48,000 square miles (compared with Great Britain’s 88,000) and a population of 2.4 million, Sarawak today is a highly-developed modern state with a thriving economy based on development of large gas and oil reserves.

In a world of strife and hatreds I find it pleasing to come to a place in which different ethnic and religious groups live – and thrive – in harmony. Some 30% of the population are Ibans – a term that covers many sub-groups – who were the original inhabitants of Borneo and are today mainly Christian. At 24% The Chinese community is the next most populous group, Chinese pioneers having come here as long ago as the 6th Century AD, but their major immigration occurring in the last century and a half. Malays represent 23% of the population, their presence going back upwards of a thousand years and the large majority of whom are Muslim. The remaining 23% are made up of a huge multiplicity of indigenous ethnic groups, many of them Christian, plus Indians and Europeans. Somehow it all works and it sets an example for so much of the rest of the world to follow as regards acceptance of diversity, mutual respect, and focus on common goals of peace and development.

But since Sarawak is in area only 17% of the vast island of Borneo – the third largest island in the world – how did it come into being as a separate state? The answer lies in the unlikely career of one of the most colourful figures of the 19th Century, James Brooke, who essentially defined its borders, governed it as an independent kingdom, and established a dynasty of “White Rajahs” who were to continue to rule until 1946.

Born in India in 1803, son of a British judge, Brooke was sent to England at the age of 12 to be educated, a process punctuated by running away from a school he disliked. He returned to India at the age of 16 and was commissioned into the Bengal Army of the British East India Company. (In this period there was no direct British rule, nor was there to be for another thirty years). The First Burmese War broke out in 1824 and Brooke was soon in action with a body of volunteer Indian horsemen he had trained. He was to lead them in a successful charge at the Battle of Rungpore in January 1825 and two days later repeated the exploit. This time however he was shot in the lung. Thrown from his horse, he was left for dead, and only when the battlefield was cleared was he found to be still breathing. He survived, but even after his initial recovery was weak enough to be sent back to Britain to recuperate. His wound was sufficient to justify a pension of £70 per year for life. The next five years, marked by continuing ill health, were spent in England and when he returned to India in 1830 he resigned his commission. Fascinated by South East and East Asia, he sailed on to China – more illness there – and then back to England.

The 1850s were years of consolidation and Brooke established a small but capable civil service. Trade grew slowly, although there were further outbreaks of violence to be suppressed, including a revolt by part of the Chinese community. Brooke was reluctant to allow European traders to operate freely as he believed that this would result in exploitation of the inhabitants. Much trouble was caused by a trader called Robert Burns, apparently a grandson of the Scottish poet and described as “disreputable”. He was accused not only of stealing women but of encouraging local tribes to kill anybody trying to enter his areas of operations. Expelled from Sarawak, Burns was to turn to arms trading off North Borneo. Here he literally lost his head after his ship was attacked by pirates. Brooke accompanied the Royal Navy commander in the area, Admiral Sir Francis Austen, on an expedition to punish those responsible. This resulted in the unlikely circumstance of the novelist Jane Austen’s brother avenging the grandson of the poet Robert Burns.

In these years Brooke invited the naturalist Alfred Russel Wallace to Sarawak. This encouraged  Wallace to decide on the Malay Archipelago for his next expedition, one  that lasted for eight years and established him as one of the foremost Victorian intellectuals and naturalists of the time.
Brooke became the centre of controversy in 1851 when accusations against him of excessive use of force, under the guise of anti-piracy operations, ultimately led to the appointment of a Commission of Inquiry in Singapore in 1854. After investigation, the Commission dismissed the charges but the accusations continued to haunt him in his later years.

Brooke never married – there is evidence of strong male friendships, but as these were frequent in the Victorian era, without any sexual dimension, it is impossible to come to any conclusions. Brooke did however admit to an illegitimate son, whose mother’s identity was never revealed, and to whom he left money in his will. As successor as Rajah be appointed his sister’s son, Charles Johnson, who changed his surname to Brooke.

Though James Brooke was still active in fighting pirates in the early 1860s, his health was by then failing. He retired to Britain, suffered several strokes and died in 1868. Here were to be two further White Rajahs – his nephew Charles (reigned 1868-1917) and the latter’s son Vyner (reigned 1917-1946). Occupied by the Japanese in World War 2, Sarawak was finally annexed by Britain in 1946, in return for compensation paid to Rajah Vyner and his three daughters. Britain granted Sarawak independence in 1963 and it formed the federation of Malaysia with Malaya, North Borneo, and Singapore later that year. (Singapore later seceded as a separate nation).

So ended one of the most romantic – and unlikely – episodes of British history, all due to one man whose exploits were indeed stranger than fiction. 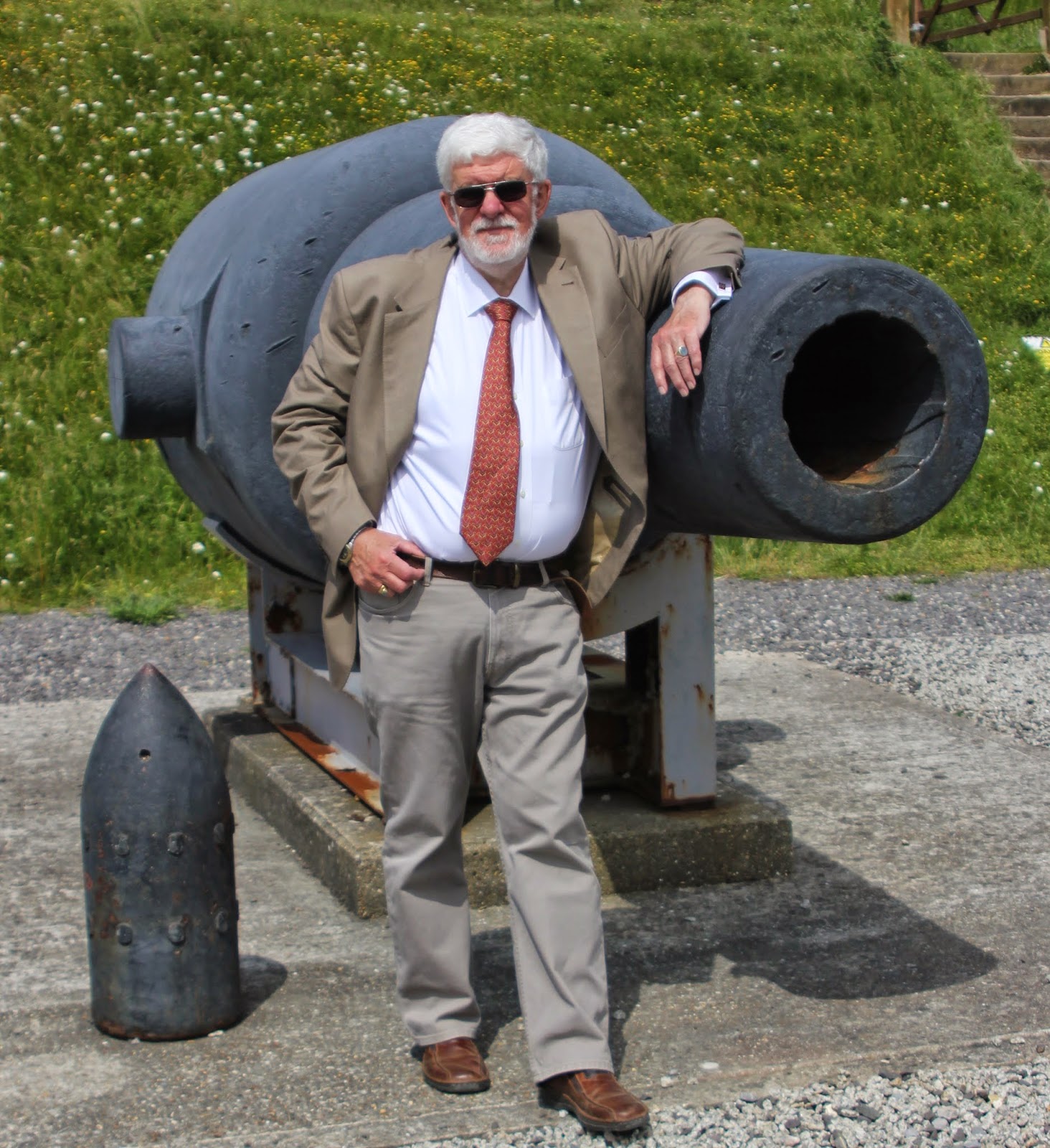 Today, 24.10.14, I’m approving the cover-design for my third Dawlish Chronicles novel and I’m still on track for publication in both paperback and Kindle formats by December.

The title, for now, is “Britannia’s X” – with “X” being undisclosed for now. I’m therefore offering signed copies of the novel to the first three successful guesses as to what “X” stands for.
The first two books in the series have been Britannia’s Wolf and Britannia’s Reach, so what could the “X” possibly be?

The only clues I’m offering are (a) that the action covers the period April – September 1881, (b) that for Nicholas Dawlish the adventure (and nightmare!) starts in the Northern Adriatic but shifts continents thereafter and (c) that Dawlish’s intrepid wife, Florence, plays a key role.

So over to you! Please submit your guesses to dawlishchronicles@outlook.com before the closing date of November 3rd 2014.

The guesses received for "X" so far have been excellent - and many could be ideal for future novels. The name I found most amusing was "Britannia's Secret", which hinted at what Florence might be wearing under her elegant and voluminous dress!

Please note that Britannia’s X is being published through the Old Salt Press, an association of independent writers dedicated to publishing the finest in nautical fiction and non-fiction. I’ve been honoured by being asked to join founder authors Joan Druett, Rick Spilman, Alaric Bond and V.E. Ulett and hope that my continuing work will live up to the high standards they have already set.
Posted by Antoine Vanner at 06:34