The Capture of the Chevrette, 1801 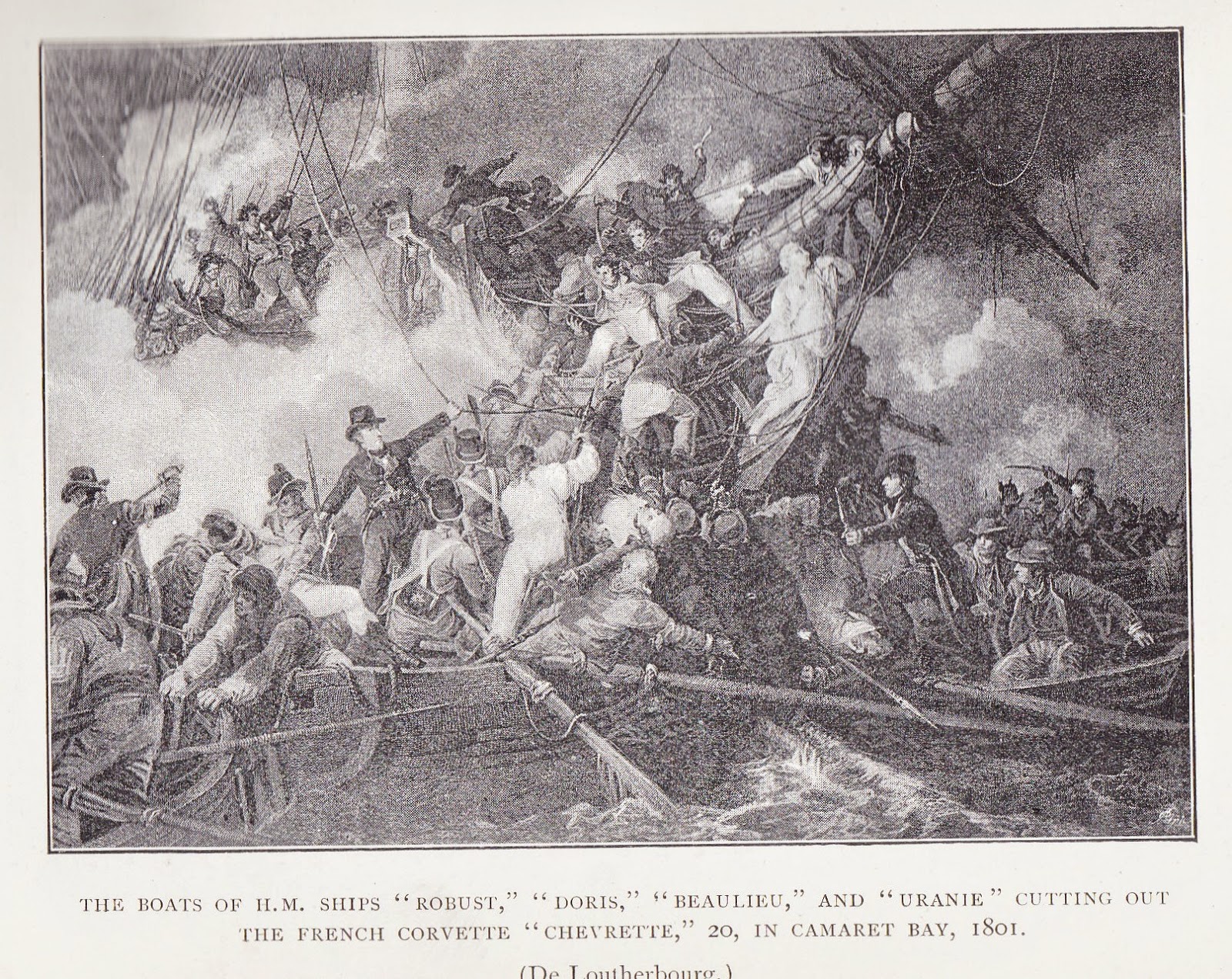 While leafing through an 1894 book entitled “The British Fleet” by Commander Charles N. Robinson (Assistant Editor of the Army and Navy Gazette) I came on a copy of the engraving above made from a painting by  Philip James de Loutherbourg, about whom I will blog again shortly.  It shows a cutting-out mission on July 22nd 1801 in which crews from four Royal Navy ships attacked a French ship in small boats, even while it was moored for protection under the guns of a shore battery at Camaret Bay on the Breton coast. Such cutting-out exploits feature frequently in naval fiction, as they often did in real-life during the Revolutionary and Napoleonic Wars. This engraving, though an artist’s impression, gives an idea of just how brutal – and near suicidal – such actions could be. As I had not heard of this action previously I searched for more details and was surprised at just how high a price was paid for capture of so small a prize.

The captain of the 20-gun corvette Chevrette, must have regarded his vessel as invulnerable as he sheltered under shore-battery cover. British ships lying offshore on blockade duty included however the frigates HMS Beaulieu, Doris and Uranie, and the ship of the line HMS Robust (74-guns). The Uranie was originally a French ship, and had been renowned for her capture of a British frigate, HMS Thames, in a spirited action in 1793, prior to being captured and taken into British service in 1797.
A first attempt at cutting out was made on the night of 20th/21st July by boats from Beaulieu and Doris. This went awry when the surprise was lost and the boats withdrew. The French had however been alerted to the danger and the Chevrette was moved in even closer under the shore batteries. Soldiers were also embarked to add to the corvette’s defence, bringing the total on board up to with a crew of 339, including soldiers who had recently board.

Undeterred, a fresh British attack was mounted on the night of 21st/22nd, with men and boats from the Robust and the Uranie now also joining in. The attacking force now consisted of 280 men carried in 15 boats. Several of these boats lost their way in the darkness so that only nine reached the Chevrette, those on board significantly outnumbered by the seamen and soldiers on board her. The British approach was now detected and fire was opened on them from both the French shore battery and from the Chevrette. The boats closed however with the moored ship – a fact that must have made it impossible for the shore batteries to maintain fire – and, despite furious opposition, a large number of men gained the Chrevette’s deck.  Within three minutes of boarding, and as fighting raged, the outnumbered British attackers managed to cut the anchor cable and set sufficient sail for a light breeze to carry the vessel out into the bay. Many of the French, apparently trapped on the waist when the British gained possession of both quarterdeck and forecastle, either jumped overboard or took cover below. The shore batteries kept the Chrevette under fire until she cleared the bay. Here the six missing British boats brought reinforcements, so that possession was assured.

The ferocity of the action was underlined by the high casualties. The French had 92 killed and 62 wounded while the British attackers lost 11 killed, 57 wounded and one missing. Given that the Chevrette was a small vessel and that her capture would have made no possible impact on the outcome of the war, and that the British casualty rate was almost 25%, the decision to attack looks foolhardy in the extreme. The only justification can be, in hindsight, that attacks of this type were vital in maintain a sense of moral superiority over the French and by so doing increasing their reluctance to break the blockade.

One other, perhaps unworthy, thought does however strike one. Was the desire for prize money a prime motivator on this occasion? One sincerely hopes not.