I’ve been in London today and am just back home, so no time this Friday evening for a long blog. The weather was beautiful – warm and sunny – and it’s on such summer days that London is always at its best. My business took me through Victoria Place, which intersects Pall Mall, just up for Trafalgar Square and I always love walking through it because of the commemorative statues there. On this occasion I did what I’d been threatening to do for ages – to whip out my mobile ‘phone and photograph some of them.

One of my favourites is the memorial to Captain Scott and the companions who died with him on his return journey from the South Pole in 1912. It’s got significance for me in that Scott was one of the heroes of my youth and that the story of his companion, Laurence Oates, was told me by my father when I was little as an example of courage and devotion to duty. 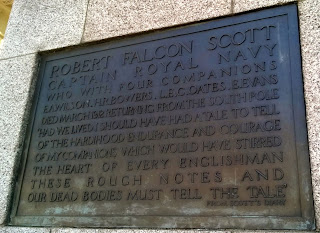 It was Oates who, when he was sick and frostbitten, realised that he was an encumbrance to the rest of the party, who were themselves little better. Oates left the group’s tent in a blizzard, his last words being "I am just going outside and may be some time" and was never seen again. Scott wrote in his own diary “We knew that Oates was walking to his death... it was the act of a brave man and an English gentleman.” The sacrifice was in vain and Scott and his companies died themselves shortly after, Scott last of all, leaving a very moving diary. I told my own daughters the same story in due course and we went to the British Museum to see Scott’s diary, written in pencil and open at the last page. I suspect that parents and grandparents will be inspiring younger generations by Scott’s last journey for centuries to come.

Just across from the Scott memorial is that to the Arctic Explorer, Sir John Franklin, who disappeared with his two ships HMS Erebus and HMS Terror in 1845 in his search for the North West Passage. Numerous expeditions were sent to find him without success – and his indomitable wife never gave up hope and urged that the search be continued. It is only since the 1980s that a series of discoveries and exhumations – and latterly identification of the wreck of HMS Erebus – has cast light on the dreadful fate of the crews. The plinth of Franklin’s statue is flanked by plaques listing all crew-members of both ships.

Next to Franklin is a more recent statue and it was of particular significance today, July 10th, the 75th Anniversary of the start of the Battle of Britain. It commemorates Air Chief Marshal Sir Keith Park of the RAF, who commanded No.2 Group of Fighter Command, tasked with the defence of London. 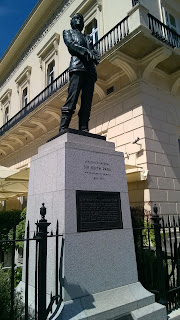 An assessment by Lord Tedder, Chief of the Air Staff, said of Park in this period: “If any one man won the Battle of Britain, he did. I do not believe it is realised how much that one man, with his leadership, his calm judgement and his skill, did to save, not only this country, but the world.” Park went on to play a similar role in the air-defence of Malta. As I saw his statue today, ignored by passers-by, I could not but recall and article in today’s Daily Telegraph which Indicated that “Four out of ten young adults have no idea what the Battle of Britain was, according to research commissioned for the 75th anniversary ….only half of all adults (sample of 1000) knew who “The Few” were, and one in ten 18 to 24-year-olds thought the Battle took place last year, with the same number thinking it was a Viking attack when presented with multiple choice answers.”

Further on in Waterloos place one encounters the Crimea War memorial, the main group commemorating the army units with separate statues of Florence Nightingale - as "The lady with the lamp"- and Sidney Herbert, the Secretary At War who sent her, and her team of nurses to Istanbul and the Crimea.

Later, on my way back to my railway station I cut across Horse Guards Parade to look at the statues of two late Victorian generals, Sir Garnet Wolseley and Lord Roberts. I love equestrian statues - I believe the best ever is that of Ulysses S. Grant, portrayed as after the Battle of the Wilderness in 1864, on his memorial on the Mall in Washington D.C. In London it’s appropriate that Wolseley looks especially smart since in his lifetime the phrase “All Sir Garnet” was used to convey satisfaction and excellence – as in “That piece of work is all Sir Garnet!” 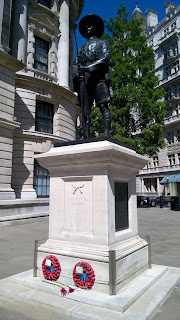 A little further on, off Whitehall, one comes across the Gurkha Memorial, notable not just for the listing sheer number of Gurkha units that have fought for Britain since 1817. The memorial lists in addition no fewer than 31 Wars and campaigns, the most recent being Afghanistan.

And nearby, what I always find one of the most moving memorials of all, that for the British tank crews of WW2. It shows a full crew, as would have manned a Sherman Firefly or a Cromwell tank, Driver, Hull Gunner, Gunner, Loader and Commander. These men not only fought hard but they died very hard also, often by fire in blazing tanks they could not escape from. It’s good they’re not forgotten.

London’s numerous memorials make walking a joy – as today has once again proved for me as well as reminding me once again of the sacrifices made to win us the freedom we take for granted. .