The Convergence of the Twain: English Channel, June 1916

I have always admired – and been somewhat disturbed by – Thomas Hardy’s poem “The Convergence of the Twain” in which he meditated on how the Titanic and the iceberg that was to sink her were brought separately into existence and how they were to meet for one decisive moment only:

And as the smart ship grew
In stature, grace, and hue,
In shadowy silent distance grew the Iceberg too.

Alien they seemed to be;
No mortal eye could see
The intimate welding of their later history,

Or sign that they were bent
By paths coincident
On being anon twin halves of one august event.

I was reminded of this poem, and of the terrible image of inexorable, unforgiving destiny which it evokes, when I read recently of the collision of two vessels four years after the Titanic disaster. Collisions at sea occur even in our own day, and did so much more frequently in the days before radar, so at first glance there was nothing unusual about this event. What did strike me however was that the two vessels involved were so dissimilar – one the epitome of luxury, the other’s accommodation so Spartan that its crew was entitled to compensation for their discomfort.

In the early years of the twentieth century giant ocean liners were as much symbols of national pride as they were means of mass transportation. Ever larger and more luxurious British and German liners competed on the North Atlantic but it was not until 1912 – “Titanic Year” – that France was to provide a worthy competitor. She was named, with obvious pride, the SS France, a 712-foot long vessel capable of carrying 2020 passengers. Driven by four Parsons steam turbines of total 45,000-hp – the first such units installed in a French passenger ship – she was capable of a top speed of 23.5 knots. Like the foreign liners she would compete with, she carried the ultimate status symbol of the era – a dummy fourth funnel. 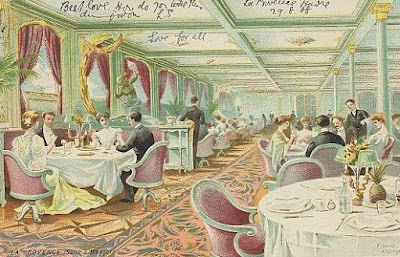 At 24,666-tons the France was smaller her British and German competitors –  her Cunard contemporary, the Lusitania was of 44,060-tons – but what she lacked in size was more than made up for by the unprecedented luxuriousness of her accommodation. Her first-class interiors, decorated in style Louis Quatorze were perhaps the most opulent on any liner, resulting in the nickname of The Versailles of the Atlantic.
The ship with which the France’s destiny would “converge”, in Hardy’s phrase, could not have been more different. HMS Eden was one of thirty-four destroyers of the “River Class” commissioned into the Royal Navy between 1903 and 1905 (the sheer numbers of vessels in the navy of this period is remarkable by modern standards). One of only three of these ships to be driven by turbines, the Eden’s installed 7000-hp drove her at a maximum of 25.5 knots. On her 550-tons and her 226-foot length she carried four 12-pounder guns and a half-dozen smaller, these being primarily intended for use against other destroyers and torpedo craft. Her two 18-inch torpedo tubes would make her a threat to larger enemy vessels in any fleet action.  Accommodation of her 70 strong crew was by necessity basic – her beam was a mere 24 feet – and like all destroyer crews of the period they were entitled to “Hard Lying Money” as a compensation.
The Eden’s career was to be spent in home-waters. Even before outbreak of war she was to prove and unlucky ship for in 1910 she broke loose from her moorings in Dover harbour in story weather and sank. She was refloated and returned to service thereafter.
The France’s career on the North Atlantic was cut short after two years by the commencement of World War 1. She was taken into naval service – initially, and unsuitably due to her high coal consumption, as an armed merchant cruiser and thereafter as a troop carrier.  The Eden meanwhile had been assigned to “The Dover Patrol”, the British naval force tasked with ensuring the safe passage of men and materials between Britain and France across the English Channel. The success of the Dover Patrol in keeping losses to a minimum, despite the presence of German U-boats operating out of bases on the nearby Belgian coast, was one of the Royal Navy’s most remarkable achievements in World War 1.

It was in the early hours of 18th June 1916 that the convergence of this twain was to occur in the English Channel, off the French port of Fécamp on the Normandy coast.  Wartime conditions inevitably meant manoeuvring with limited lighting of ships and collision was a constant danger. The       consequences for the Eden were fatal, her 550 tons no match for the France’s more than 40-times times greater tonnage. The Eden’s commander, Lieutenant A.C.N. Farquhar, and 42 officers and men went down with her and 33 survivors were picked up by the France. Within the larger scale of World War 1, and occurring only three weeks after the Battle of Jutland, the Eden’s tragedy was quickly forgotten by all but the families of those who had perished.
Essentially undamaged, the France went on with busy war service. The sinking in late 1915 of Titanic’s sister, the Britannic, which had been converted to a hospital ship, demanded provision of another ship of high capacity. This need was to be met by the France and she was to serve in this role in the Mediterranean until entry of the United States into the war increased the demand for troop transportation. The France once again changed role and as a trooper proved capable of carrying up to 5000 men at a time across the Atlantic, shipping them to Europe in 1918 and back home in 1919. One suspects that the comfort level for these troops was substantially lower than for the 2020 passengers she would carry in peacetime.
The France’s civilian career resumed in 1920. Her luxurious accommodation was once again an attraction to the wealthy and in 1924 she was converted to almost total first-class accommodation only, with only 150 third-class berths. She was to continue in service until the early 1930s. By then a dinosaur, the Depression made demand for the comfort she offered less affordable and continued operation was uneconomic. She was scrapped in 1935.

The French presence in the North Atlantic passenger trade was not at an end however and in the year that the France was scrapped the Normandie, arguably the most beautiful liner ever built, entered service.


But that’s another story.

"Britannia’s reach is not just political or military alone. What higher interest can there be than consolidation of Britain’s commercial interests?” So says one of the key figures in this novel , which centres on the efforts of a British owned company  to reassert control of its cattle-raising investment in Paraguay, following a revolt by its workers. The story of desperate riverine combat brings historic naval fiction into the age of Fighting Steam. Click on the image below for more details. 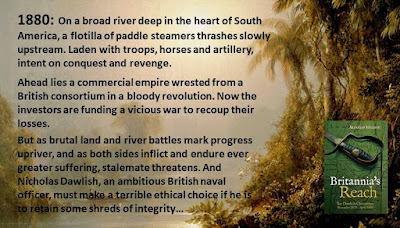