The Arrival of the Naval Mine

From the mid-19th Century onwards the naval mine developed in the general from we know today and which was to play a significant role in the American Civil War, the Russ-Japanese War of 1904-05, both World Wars and the Iran-Iraq War of 1980-88. The famous order by Admiral Farragut as he drove his squadron into Mobile Bay in 1864 – “Damn the torpedoes! Full speed ahead!” – referred to mines, then often labelled as torpedoes, and not the automotive weapons that emerged in the next decade. The concept of the floating mine had been around for centuries – often in the form of boats that would be allowed to drift downriver towards enemy bridges. The weakness was however that explosion would essentially be random, whether close to the enemy or not, as detonation would depend on a slow-burning fuze or a clockwork mechanism. The arrival of practical electrical technology in the 1850s and 60s got around this problem, allowing controlled detonation from shore of submerged mines, or detonation by systems integral to the mine itself and triggered by contact.
As the Confederate defences of Mobile Bay demonstrated, mines proved a very effective, and relatively cheap, way of defending harbour approaches – as was shown by the dramatic sinking of a unit of Farragut’s squadron, the monitor USS Tecumseh. (One episode of my novel Britannia’s Wolf describes the protection of a major Russian Black Sea anchorage in 1877 by mines anchored across the entrance and controlled through electrical cables connected to observation posts onshore). 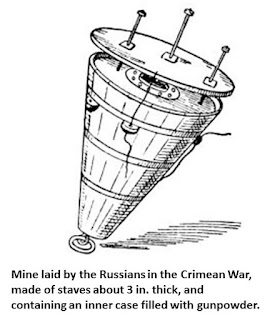 In view of my interest in such weapons systems I was fascinated recently to find sketches of early mines in a publication called “The British Navy Book” by Cyril Field, apparently published in 1915/16. It indicated that the first large-scale use of practical mines occurred in the Crimean War (1854-56) when the Russians deployed them in both the Baltic and the Black Sea to limit the movements of British and French warships. The approaches to the great Russian naval base at Kronstadt, outside St. Petersburg, were protected in this way and some fifty mines were “trawled up” in ten days and destroyed by British forces. The improvised technique used was hazardous in the extreme – two pulling- boats suspended a long rope between them  and it was sunk by heavy weights to a depth of ten or twelve feet, and held suspended at that depth by empty casks as floats. The boats then separated as far as the rope would allow, and rowed onwards.  There appears to have been several types of mine, some of copper, others of wooden staves like those of a barrel, and the bursting charge was 700 pounds of gunpowder. Detonation seems to have been either by a “galvanic current” sent through a cable from a shore station or by contact, the exact mechanism being unspecified. The drawings here give details of Russian mines encountered by the British. 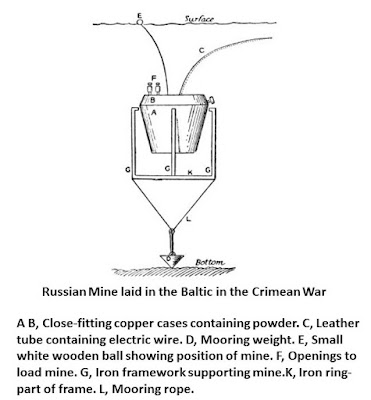 Britain was soon afterwards in conflict in war with China in “The Arrow War” of 1856/60. The 890-ton screw corvette HMS Encounter came under attack by floating mines launched by the Chinese when operating in the Pearl River (now called the Guangdong) downstream of Canton (known as Guangzhou today). The source quoted earlier provides extracts from a letter written by an officer on board Encounter.
The first attempt, on 24th December 1856, involved an explosive-laden sampan towed close by another craft, and then let loose to drift down towards Encounter’s bows. It was captured by a ship’s boat acting as guard and fuses burning inside bamboo tubes were extinguished in time to prevent explosion. 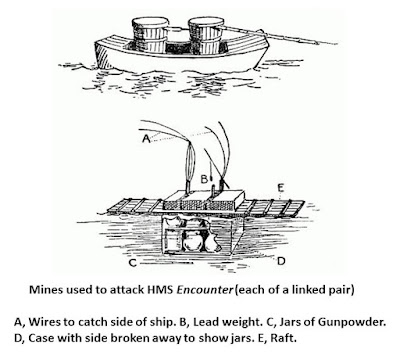 The second attempt, in the early hours of on 5th January was potentially more lethal.  The officer’s letter states that the attack was by “two rafts, moored together, with about 20 fathom of line buoyed up, with hooks to catch cables or anything else, and, on the wires touching the ship's side, to break by the little lead weight the lighted fuse on the top of the bamboo, which communicated with the powder. These were lighted and all ready, but fortunately observed by our guard-boat and towed clear of ship. Being only a raft it was just awash, and in each caisson at least 17 cwt. (i.e. 1904 pounds or 865 kilograms ) of gunpowder in open tubs and jars. The raft itself was made of 6-inch plank well bound together, and caulked.” 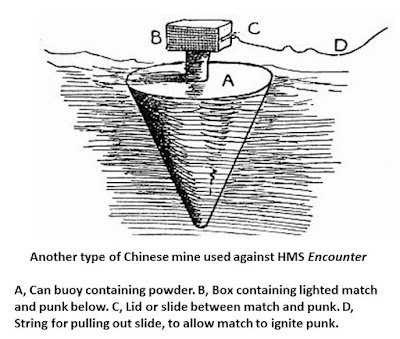 Encounter was attacked again two days later, again in the early morning hours of darkness. It seems to have been guided into position by swimmers – an act of considerable heroism. According to the unnamed British officer “A pair of vessels in the shape of a can-buoy with a flag on the top, about 8 inches long; the fuse, with a tin box containing punk (i.e. tinder) over the fuse, then a cover with lighted match on top; this had a string to it, which, when pulled, drew out the centre partition and communicated the fire to the punk, to allow the fellows who swam off with them towards the ship to make their escape; but they got frightened at some stir with the boats, and by accident one went off with a fearful explosion on the starboard bow, about 60 yards, and the other, being deserted, floated down on our booms. One of the men was caught and brought on board here, and had his brains blown out at the port gangway. The buoy-shaped vessel was capable of holding about 10 cwt. (i.e. half a ton) of gunpowder." 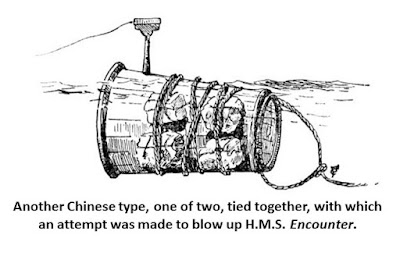 One final attempt on the Encounter was again by two floating mines coupled together by a length of rope, each containing half a ton of powder. They were towed close by a small boat but it was detected by the ship’s look-outs and destroyed by gunfire. Had these attacks been successful it is hard to imagine the Encounter surviving and one is struck by the courage of the Chinese who manoeuvred these contraptions into position. Crude though they might have been, the era of mine-warfare had commenced.

If you have found this article interesting you may like to read of mines used in anger in 1877. The first book in the Dawlish Chronicles Series features ironclad action in the Black Sea as the vicious Russo-Turkish War of 1877-78 reaches its climax.

Russian forces are driving  deep into the corrupt Ottoman-Turkish Empire.  In the depths of a savage winter, as the Turks face defeat on all fronts, a British officer is enmeshed and finds himself confronting enemy ironclads, Cossack lances and merciless Kurdish irregulars. And in the midst of this chaos, while he himself is a pawn in the rivalry of the Sultan’s half-brothers for control of the collapsing empire, he is unwillingly and unexpectedly drawn to a woman whom he believes he should not love.

Britannia’s Wolf is available in hard-copy and Kindle format – click here for details and to read the opening via the "Look Inside" feature.

Britannia's Wolf It is also available as an audio book read by the distinguished American actor David Doersch. If you haven't previously ordered an audio-book from audible.com you can download it without cost as part of a 30-Day Free Trial. You can listen on your Smart Phone, Tablet or MP3 Player.