Privateer Action in the English Channel, 1793

Probably like many others I have always thought of privateers in the Age of Fighting Sail as preying on enemy merchant shipping on commercial routes in open ocean, far from land. My perception has however been changed by an 1889 book, “Betwixt the Forelands”, by the Victorian maritime author W. Clark Russell, in which he deals with the naval history of the English Channel from the Middle Ages onwards. At its narrowest, this strait between the English and French coasts is only some twenty miles wide, and domination of it was always a key objective of British naval policy. It was – and is – one of the busiest commercial waterways in the world, offering access to Northern Europe from the Central Atlantic. Clark Russell’s book highlights the fact that, though Britannia might rule the waves and dominate the Channel, the prize of rich commercial pickings was always an inducement for French privateers in light craft to dart out, seize their prizes and retire quickly to the cover of their well-defended home ports. The story of one such foray tells just how savage these encounters could be.
Tensions between Britain and Revolutionary France had escalated through 1792. Following the execution of the French King Louis XVI on 21st January 1793 Britain expelled the French ambassador and on 1 February France responded by declaring war on Great Britain. The period of the Revolutionary and Napoleonic Wars, which were to last until 1815, with a break of only a few months, had begun. Within days of the declaration the crew of a British merchant ship, the Glory, was to be one of the first victims of the war at sea, and indeed at its most cruel.  Under a Captain Benson she had just cleared the South Foreland and its White Cliffs, just north-east of Dover, when a French privateer bore down upon her. An attempt to flee failed and the French vessel sent a boat across with fifteen armed men. What followed was atrocious. According to Clark Russell Benson was “seized, bound hand and foot, and lashed down upon a chest. His crew was clapt in irons, plundered of every article, and insulted by every injurious terms the Johnnies could lay their tongues to” (It is notable that in this period the French were referred to as ”Johnnies”).

The French were now preparing to run their prize back home – Calais was twenty miles away, the great base at Dunkirk just twice that – but now retribution arrived in the form of the 32-gun frigate HMS Juno, en-route to the Mediterranean and commanded by the future Vice-Admiral Samuel Hood (1762 – 1814), a cousin of the more renowned admiral of the same name. There could be no contest, no hope of escape, and the French surrendered without further ado.

It is what followed which was perhaps most interesting, and I quote below from the statement made by the Glory’s Captain Benson, as repeated by Clark Russell:

After his ship had been boarded and his crew put in irons Benson claimed that the Frenchmen “led me down to my cabin, where they placed me on my back, and lashed me to my chest by my neck, arms and legs, with my head hanging over. I was in the most excruciating pain for four hours and a half. In this helpless condition the cowardly miscreants (they disgrace even the name of Frenchmen) snapped a pistol at my head, and another made a thrust at me with a cutlass, which fortunately went off at an oblique direction through my coat and jacket.” Worse was to follow. “They cut off my dog’s head, they said, for the purpose of representing the fate of the whole crew when we got to France.”

As the Juno drew near the French released their prisoners – it would have been unwise for the French to be found with their captives so cruelly trussed up. Benson was however little inclined to forgive and forget and, as he remarked, “It is difficult at all times to keep the passions within a due state of subordination.” He accordingly snatched a cutlass from the hand of the French seaman who untied him and “I almost at one stroke severed his left hand from his body; when, fearing for the further effects of my frenzy, he jumped out of the cabin window and was drowned. Another followed his example. And jumped off the taffrail, and the (French) captain, dreading the just vengeance which was awaiting him, took a pistol and shot himself through the head.”
Benson’s “frenzy” was still unsatisfied: “I was not yet reduced to reason and, before the Juno’s crew could overpower me, had cut and lacerated three more of the Frenchmen so dreadfully that they were now entirely covered with blood, and now lie in the hospital without any hope of recovery.”

It is possible that today Benson would be hauled before a court to answer for violation of the Human Rights of his persecutors.  His era was however a more robust one and he ends his statement: “Those only who suffer can feel, and, though the more moderate part of mankind my blame me for rashness, my own heart acquits me of any deliberate or unprovoked act of cruelty.”


This small, vicious, action was one of the first of the new conflict. Hundreds more lay ahead in a then-unimaginable twenty-two years of war.

Six-inch breech loading guns represented the cutting edge of naval technology in the early 1880s. In my novel Britannia’s Spartan they are seen in use on both British and Japanese ships. The splendid woodcut below shows Japanese crews managing just such a weapon in the war of 1895 against China.

If you're in the UK click here to read the Opening 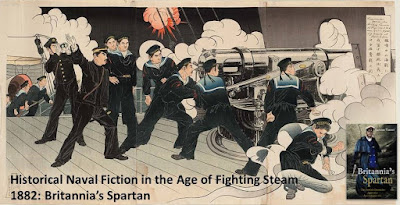 If you have not already subscribed to the mailing list, you can do so by clicking here or on the banner image above.  You will then receive a copy of the story by e-mail.