The Crimean War (1854 – 56) is most remembered for images of the charge of Britain’s Light Brigade at Balaclava, the privations suffered by the ill-equipped besiegers of Sevastopol through a deadly winter and the achievements of Florence Nightingale, all episodes that took place in the Crimea itself. Earlier blogs have however pointed out that lesser-known operations took place in the Baltic and on the Kamchatka peninsula on Russia’s Northern Pacific coast. (Links to earlier blogs on this and other topics addressed in this article can be found at its end). The least-known operations of all took place however on the shores of the Arctic Ocean, in the White Sea and in the Kola Inlet. Both these locations were to play roles in both World Wars as landing points for aid sent by the Western Allies to Russia, most notably via the epic Arctic Convoys of WW2. They were also to provide bases for ineffectual British support of White Russian forces against the Bolsheviks in the Russian Civil War. 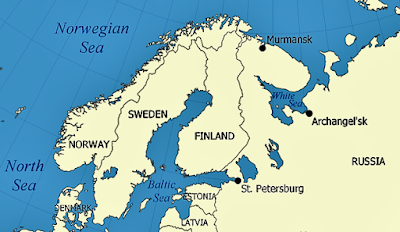 British and Dutch shipping had been accessing Russia for trade by this area since the late sixteenth century – indeed the Dutch navigator Willem Barents (1550 – 1597) had given his name to the sea north of which forms part of the Arctic Ocean.  Arkhangelsk, a major city at the southern end of the White Sea had remained a major trading port ever since.  Murmansk, at the head of the Kola inlet further to the west, also had port facilities, though minor.

When Britain and France entered the war in early 1854 to support the Turks, who had already been fighting the Russians for several months, the decision was taken to send a small Royal Navy squadron to harry Russian presence in these northern waters by attacking shipping and forts. The Russian Navy had no significant presence in the area and weather conditions in winter made it advisable to confine operations to the summer months.

The British squadron that was sent was under the overall command of Captain Erasmus Ommanney (1814 – 1904). He had been present at the Battle of Navarino when he was thirteen years old – naval careers began early in those days! He had previous experience in high latitudes as he had been second-in-command of the expedition sent in 1850 to search for Sir John Franklin and his ships Erebues and Terror which had disappeared during an effort to find the North-West Passage. It was Ommanney who discovered "fragments of stores and ragged clothing and the remains of an encampment Beechey Island " though no further trace could be found. Ommanney awarded the Arctic Medal for this and he was to spend of his later years in Arctic-related scientific work, for which he was knighted. He rose to the rank of vice-admiral.

Ommanney’s squadron consisted of the 26-gun frigate HMS Eurydice and two near-identical steam sloops, HMS Miranda and HMS Brisk, carrying 15 and 16 guns respectively. The 910-ton, 140-foot Eurydice carried sail only and though she entered service in 1843 she was little different to frigates of the Revolutionary and Napoleonic War eras. Her ultimate fate was to be a tragic one, but at the time of the White Sea expedition that still lay some three decades in the future. All her guns were truck-mounted 32-pounder muzzle loaders, no different to those in service at Trafalgar. Though commissioned only a few years later, the Miranda and the Brisk, though also wooden-hulled, represented major technological advance. Improved versions of HMS Rattler, the first screw-driven warship in Royal Navy service, these two 1,523-ton, 196- foot vessels could make just over 10 knots maximum under steam power. This advantage was however offset by the fact that, like Eurydice, they were still armed only with 32-pounders on the broadside.

The small force arrived off the north Russian coast in July 1854 and the campaign started by advancing towards the southern end of the White Sea. Here, on a small archipelago called the Solovetsky Islands was something of a curiosity – a Russian fortress that was also a monastery. Much of this massive construction dated from the 16th century and then and in the early 17th century, it had withstood attacks by the Livonian Order (a branch of the Teutonic Knights) and by the Swedes. It is hard at this remove to understand what was to gain by attacking this fortress. (In other blogs I have approvingly quoted Nelson’s dictum that “A ship’s a fool to fight a fort”).

Even had Ommanney destroyed this fortress-monastery  – in itself an impossibility given the limited forces at his disposal – the strategic value would have been essentially zero. In the event the bombardment lasted two days – 6th and 7th July. It achieved nothing and had the fort been better armed the British ships might have stood a good chance of being destroyed themselves. Two weeks later, on July 23rd, Miranda and Brisk, operating close inshore, bombarded the small town of Novitska.


The only other significant action was further west, in the Kola inlet. Miranda sailed southwards – that is upriver – towards the settlement of Kola, just south Murmansk. Her steam propulsion was a major advantage since the thirty miles distance to be covered was against a strong current and in waters sometimes so narrow that there was scarcely room to swing the ship. Miranda anchored off Kola on August 23rd and under a flag of truce a demand was made that the fort there, its, garrison and all government property be surrendered.  The crew remained at their stations through the night and when no answer was returned in the morning, the flag of truce was hauled down, and the Miranda, getting within 250 yards of the shore battery, opened a fire of grape and canister. This supressed opposition enough to allow a landing party of bluejackets and marines to storm ashore. They succeeded in dislodging the enemy from the batteries and in capturing capture the guns. A hot fire was opened on them from the towers of a nearby monastery but its defenders were also driven out.  Government stores and buildings, was immediately set on fire and completely consumed. Miranda then dropped downriver again.

That was the end of the campaign and the squadron returned to Britain thereafter. Miranda proceeded thereafter to the Black Sea to support the main Allied effort. Captain Edmund Moubray Lyons (1819 -1855), who had manoeuvred her up the Kola Inlet with considerable skill, died of wounds in June 1855. Miranda herself had an active career thereafter, mainly in Australian and New Zealand waters, and was broken up in 1869. Brisk was to have a similarly active career, most notably including service on the West Africa Anti-Slavery Patrol. She survived to  1870. The Eurydice, by then an anachronism, was to come to a tragic end in 1878. 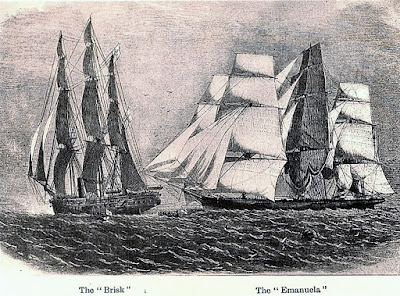 And the final verdict on the White Sea expedition of 1854? It is easy to be critical with the advantage of hindsight, but even so one can only question why lives – both British and Russian – should ever have been squandered in a such a pointless exercise. The same applies to the operation in the Northern Pacific. What, in either case, was the strategic value?

But now a group of revolutionaries threaten that power’s economic basis. Their weapon is the invention of a naïve genius, their sense of grievance is implacable and their leader is already proven in the crucible of war. Protected by powerful political and business interests, conventional British military and naval power cannot touch them…

A daring act of piracy drags the ambitious British naval officer, Nicholas Dawlish, into this deadly maelstrom.  Drawn in too is his wife Florence, for whom a glimpse of a half-forgotten face evokes memories of earlier tragedy. For both a nightmare lies ahead, amid the wealth and squalor of America’s Gilded Age, and on a fever-ridden island ruled by savage tyranny …

For US and rest of world click here to get more details and to read the first chapter
Posted by Antoine Vanner at 14:25