The Victorian Fascination with Murder

I have always enjoyed George Orwell’s essays, not only for the variety of the topics and the clarity of his arguments but the simple elegance of their English. One of their charms is that he often fastens on a simple incident or social phenomenon and proceeds to build a powerful philosophical or political lesson from it. As such, though they were written over half a century ago, the majority continue to have direct relevance to our own time (Try “Notes on Nationalism”)

One of Orwell’s most interesting essays is “The Decline of the English Murder”, which has an unforgettable beginning – what could have been the opening of a novel no less than of an essay:

It is Sunday afternoon, preferably before the war. The wife is already asleep in the armchair, and the children have been sent out for a nice long walk. You put your feet up on the sofa, settle your spectacles on your nose, and open the News of the World. Roast beef and Yorkshire, or roast pork and apple sauce, followed up by suet pudding and driven home, as it were, by a cup of mahogany-brown tea, have put you in just the right mood. Your pipe is drawing sweetly, the sofa cushions are soft underneath you, the fire is well alight, the air is warm and stagnant. In these blissful circumstances, what is it that you want to read about?
Naturally, about a murder.
I remembered this when I stumbled in this cartoon from a 1849 edition of the humorous magazine Punch, which shows that the tradition was well established a century before Orwell. It shows a pater-familias in a slum lodging reading for his wife and seven children and holding them enthralled: 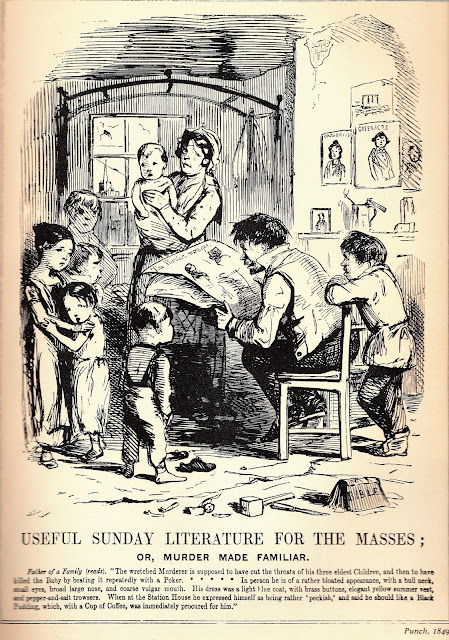 Punch  in this period was not exactly given to punchy captions (no pun intended!) and this case was no exception as it reads:

Father of a family (reads): “The wretched Murderer is supposed to have cut the throat of his three eldest children, and then to have killed the baby by beating it repeatedly with a poker .... In person he is of a rather bloated appearance, with a bull neck, small eyes, broad large nose and a coarse vulgar mouth. His dress was a light blue coat, with brass buttons, elegant yellow summer vest, and pepper-and-salt trowsers.  When at the Station House he expressed himself as being rather ‘peckish’ and said he would like a Black Pudding which, with a Cup of Coffee, was immediately procured or him.”
The incidental detail in the drawing is also notable – the Bible has been thrown on the floor and lies unnoticed, a mallet and chisel are there also, conveniently, should of this particular father decide to emulate the murderer and a cut-throat razor is prominently displayed on the mantelpiece.  Above it are portraits – probably torn from a magazine – of what were often referred to as “celebrated murderers” – in this case Greenacre and Courvoisier.

Another Punch cartoon of the period is a commentary on the popularity of such portraits. A ragamuffin is purchasing an illustrated newspaper which is advertised by a poster proclaiming: 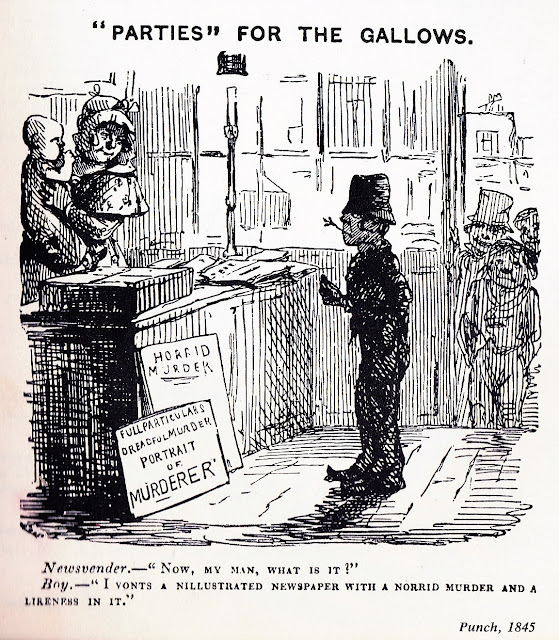 Another line of business associated with such crimes – especially when executions took place in public up to the mid-1860s – was the sale of alleged “Last Confessions” by hawkers who moved through the enormous crowds that gathered to watch. The illustration below shows on such vendor and his wares - notice copy on his hat!. 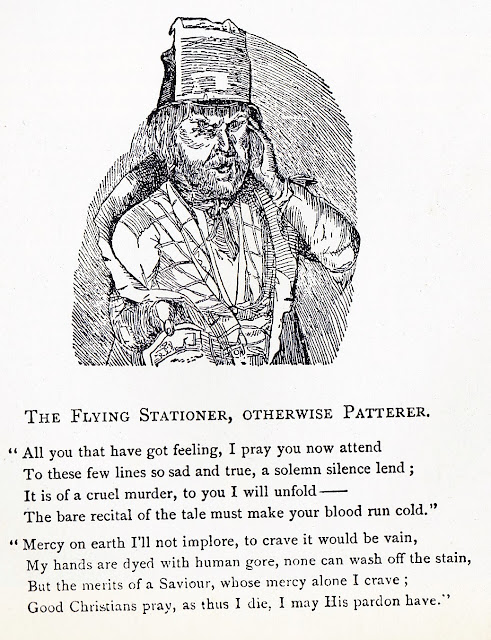 A good example of the genre are verses referring to Francois Bernard Courvoisier, a French valet who murdered his employer, Lord William Russel, in 1840. Courvoisier’s is one of the portraits over the mantelpiece in the cartoon referred to above. The lengthy account of the crime was apparently set to music (to the Tune of “Waggon Train”, and there was a chorus in which everybody could join in – it must have made for a jolly evening at the tavern (or even a Sunday afternoon with the family). 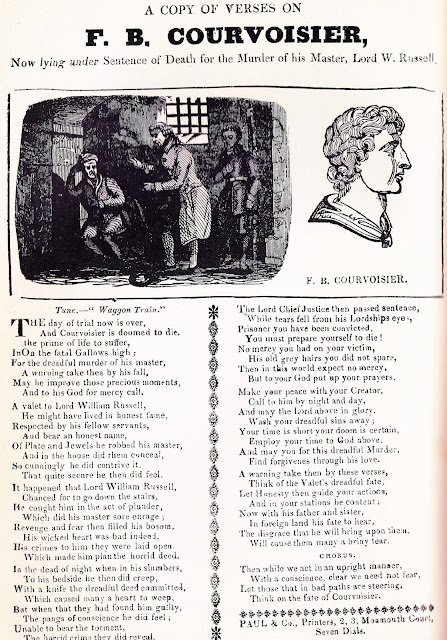 Interest in such crime was not confined – as the Punch cartoon implies – to the “lower orders”.  High-profile trials were followed as avidly as the O.J. Simpson case was to be followed in our own time. Refined intellectuals like Nathaniel Hawthorne, George Eliot and her partner G.H. Lewes were all fascinated by the murder-trial of Madeleine Smith murder case in 1857. The chilly bluestocking Jane Carlyle wrote at length, and breathlessly, to her even frostier husband Thomas about the same case. Both Dickens and Thackeray attended public hangings at least once (Dickens was disgusted by the crowd's behaviour) and even the arch-litterateur Henty James was still writing at length about the Smith case to a friend in 1914.

The tradition survives in the Sunday newspapers but it is in the endless sequences of television documentaries about crime that carry it forward most effectively into the 21st Century. Interviews with victims’ families, with police, with local journalists and, on occasion, with perpetrators, often illustrated not just with gory photographs but with dramatized reconstructions, are in their way no better or no worse than the reading material being enjoyed in the 1849 slum.


Human nature does not change and the thirst for sensation is never slaked.