One of the more attractive aspects of the Victorian Age was the willingness to take on large and often unprecedented engineering challenges. This was perhaps never more so than at sea where, in the course of less than a century the definition of what constituted “a large vessel” changed by a factor of over 600%. In 1805, at the time of the Battle of Trafalgar, HMS Victory, of 3500 tons and 220 feet long, wind-powered and of wooden construction, was almost certainly larger than any merchant ship afloat. By 1901 the largest type of ship, the ocean liner, was typified  by the “Big Four” built for the White Star Line – Celtic, Cedric, Baltic and Adriatic – of over 21000 tons and 720 feet long, driven at 17 knots by steam-power and built of steel.

For the world’s navies the process had taken off in the 1860s, with the arrival of the sea-going ironclad, typified by the Royal Navy’s innovative HMS Warrior of 9200 tons and 420 feet long. Yet larger ironclads were to follow in quick succession. Maintenance of such huge vessels, especially exterior access to their hull-plating below normal water level, posed new challenges. The mechanics of corrosion caused by galvanic action was still imperfectly understood and so demanded regular inspection – and if necessary renewal – of plating. As a global mercantile power, dependent on naval protection in time of war, it was essential that Britain should have necessary repair facilities at its major bases scattered through the world. The most important facility available at any such location was a drydock which would allow full access to all parts of a hull exterior.

During the 19th Century the British island-possession of Bermuda, in the western part of the North Atlantic, was an important Royal Navy base. It was well placed for support of operations not just in the Atlantic but in the Caribbean as well and as such it replaced Halifax, Nova Scotia, in 1818 as the headquarters for the North America and West Indies Station. It was well defended with fortifications and coastal artillery batteries and a repair-dockyard was an essential requirement. Such a facility was accordingly constructed at Ireland Island on the west side of the Bermuda group. Much of the work was accomplished by convict labour, which was only finally withdrawn in 1863.

Construction of a conventional drydock – a basin which could be open to the sea and into which a ship could be floated, and which could be closed off by watertight gates and pumped dry – proved however to be challenging in the extreme. The problem was that the sandstone which constituted Ireland Island was porous, so that pumping out of any flooded excavation was negated by constant influx of water. The solution finally decided upon in the late 1860s was therefore to build a floating drydock. Such items were ship-length constructions of U-shaped cross section. When compartment’s in their bottoms were opened to flooding, they could sink until only the tops of the U’s arms remained above the surface.
A ship could then be manoeuvred between the sides and when the bottom compartments were once more pumped dry the dock would rise, carrying the ship with it. An additional advantage of such docks is that they are mobile and can be built at a shipyard and towed thereafter to another location, or even succession of locations.

By the 1860s the floating dock concept was known and proven but the growth in ship size demanded that what was needed for Bermuda would be the biggest such unit yet built. It was to take ships of up to 10000 tons – including Britain’s new ironclads – but its location in Bermudan waters, where marine growth was likely to foul it underwater valves and piping, would demand the facility to allow regular “careening” – cleaning by scraping. The design that resulted was 380 feet long and 120 feet separation between its vertical sides. It could accommodate vessels longer than its own length and its own displacement was 8400 tons.

Construction started at the Campbell and Johnstone shipyard on the river Thames, near Woolwich, in 1866 – in this period, and up to the beginning of the 20teh Century, London was still a major ship-building centre. Construction was of iron – use of steel was still a decade or more in the future – and some 1400 men were involved in the work. It was launched, after one failed attempt, in September 1868 and was taken downriver to Sheerness, where it was submerged to wait out winter storms until the following year.
A tow of this magnitude and length – allowing for course alterations this was to amount to just under 4000 nautical miles – had not been attempted previously. Timing was essential so as to minimise the chance of encountering story weather. The start of the towing operation was accordingly postponed until June 1869.The specialist ocean-going tug concept had not yet been developed and two of Britain’s largest ironclads, Agincourt and Northumberland – were therefor tasked with the first leg of the tow, from Britain to Madeira.  This proceeded without incident, as did the second leg, from Madeira to Bermuda, the task now passing to HMS Warrior and her sister Black Prince. The average speed for the entire tow was a very respectable 4.8 knots, with 6 knots being exceeded on two occasions. Progress was helped by the open ends of the dock being closed off with pointed “cutwaters” to reduce drag, and when following winds were encountered a sail was rigged within the dock to take advantage of it. Manoeuvring was assisted by the veteran paddle-slop HMS Terrible being linked to the dock’s stern (see illustration above).

After its successful arrival in Bermuda the floating drydock was to provide over three decades of service until replaced by a new, steel, unit, in 1906. It was sold for scrap thereafter to a German company but while being towed away broke loosed and grounded on a reef. Her remains are still visible off Spanish Point, Bermuda.

A wonder in its time, one cannot but speculate how many of our greatest engineering achievements today will be forgotten like the Bermuda dry dock as century and a half from now. Sic transit gloria mundi.

A personal update from Antoine Vanner 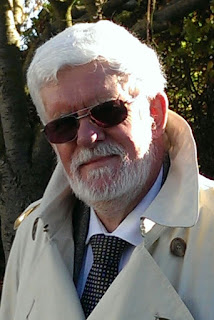 The last 10 days have been very busy indeed. During it I approved the cover for the fourth Dawlish Chronicles novel, based on a painting commissioned from the talented artist Sara Lee Paterson and I also submitted the final manuscript for publication – more details will be provided here shortly. Today I received the proof copy and this is currently under intensive scrutiny!

The new book will be available in both paperback and Kindle formats next month. I’m also about 25% of the way into the first draft of the next Dawlish novel (in addition to another which had gone through three drafts and is ready for the final one).

What has been for me the most novel experience this week has been approving, after “proof-listening”, the audio-book version of “Britannia’s Wolf”, the first of the Dawlish novels. It has been read by the American actor David Doersch and we intend to have it available before the holiday season. It’s been an amazing experience hearing my own words brought to life by a talented narrator. As an actor and director, David has worked at some of the leading Shakespeare Festivals in the United States most recently playing Nick Bottom in A Midsummer Night's Dream at the Virginia Shakespeare Festival. He is also an accomplished Fight Director, which is work that has taken him to 5 continents. Currently, he works as the Casting Director and Fight Coordinator for the live touring arena stunt spectacular, “Marvel Universe LIVE!” He literally gets to train superheroes for a living! I’ll be providing more details of the audio-book in the near future – it too will be available before Christmas.

I was also flattered in the last week to be asked to be a speaker at the Weymouth Leviathan Maritime Literary Festival in March next year, where I’ll also be running a workshop on plot-developments for aspiring writers. I'll be delighted to be able to meet fans who can attend and to discuss my books and my approach to research and writing, with them.  It promises to be a fascinating occasion. I'll be providing updates as details are firmed up but on the meantime, if you're in the UK in 12th-13th March period next year please consider reserving a slot in your diary.  For further information click here.
Posted by Antoine Vanner at 13:49