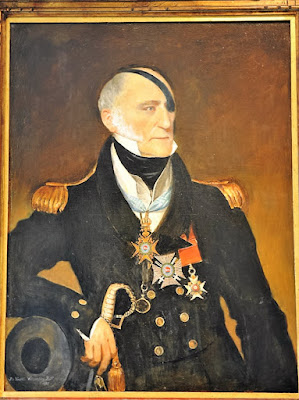 It is only in the last few days, while perusing a publication of mid-19th Century vintage that I came across a reference to Admiral Sir Nesbit Josiah Willoughby (1777–1849) who “has so lately departed from the scene of earthly fame.” The writer went on to portray Willoughby as “one of those men from whose breast all sense of danger seems to have been banished.” Instances to evidence this were then quoted, some of which I’ll refer to later in this article. He seems to have been an extraordinary figure, one whom a novelist would hesitate to create lest accused of exaggeration.

I hadn’t come across Willoughby before, though I’ll do my best to find out more, particularly as the regards the most unusual phase of his career. He had entered the Royal Navy in 1790 and in 1799 he was lucky to have survived the wreck of the 64-gun HMS Sceptre at Table Bay, at Cape Town, South Africa. She was caught at anchor by a sudden storm and her cables parted. She was driven onto a nearby reef and pounded to destruction. Over  350 of her crew died and there were only 42 survivors. One was Willoughby.


Willoughby was to distinguish himself in 1801, as a lieutenant, at the Battle of Copenhagen. Here he boarded the Danish ship Provestein  “under fire from her lower-deck guns ,and with only thirty men, succeeded in keeping possession of her in the most trying circumstances” (One is impressed by how the Victorians could refer to close-quarter slaughter by terms such as “trying circumstances”!)  This should have led to greater things but Willoughby was court-martialled for “insolent behaviour” to a senior officer. He seems to have had previous form on this score and as this was a second offence he was dismissed from the service.

When war with France resumed in 1803, following the short-lived peace of Amiens, Willoughby immediately volunteered for service – insolent or not, capable officers must have been at  a premium. He soon found himself assigned to the Blockade of Haiti (or “Saint-Domingue” as it was then referred to) which had been almost completely overrun by Haitian forces under the command of the brilliant and ruthless General Jean-Jacques Dessalines. The remaining French forces were isolated in the two large ports of Cap Français and Môle-Saint-Nicolas and a few smaller settlements. When war broke out in May 1803, Britain immediately despatched a squadron to eliminate communication between the French outposts and to capture or destroy the French warships based in the colony. Several actions followed and some of the French ships manged to Spain. One significant action was when HMS Hercule, on which Willoughby was serving, encountered the French frigate Poursuivante. A spirited action followed but the more nimble Poursuivante managed to escape. In this period the Hercule was caught in a hurricane. Willoughby was in the sick bay at the time but when the fore-topmast was carried away his illness did not stop him going aloft to help clear the wreckage.
By November the French garrison at Cap Français was starving and an agreement was negotiated  by them with the Haitians that they could evacuate safely provided they would leave by 1st December. The British blockading force refused the French permission to sail and there was no option but to surrender.  A French ship, the Clorinde, that attempted to escape but was almost wrecked but saved by Willoughby, who not only rescued the 900 people on board, but also refloated the vessel.

Action against the Dutch forces on the Caribbean island of Curacoa now followed. A British force was landed and began siege operations which were ultimately to be abandoned as too costly. One of the officers who landed was Willoughby “who had charge of the advanced batteries and, in order to encourage his men under the tremendous fire that was kept up, he took his meals in the most exposed situation. The earth was ploughed up all around him, and one man we believe was killed close to the spot; but still the table and chair of the daring young officer who sat there remained untouched. On one occasion Lieutenant Samuel Perrott R.M. (Royal Marines) was induced to seat himself in the chair; scarcely had he done so when a shot came, took off his left arm, badly wounded the knee upon which it had been resting, and knocked the table to atoms.”

One can but wonder whether Willoughby’s heroics on this occasion were in fact in any way supportive of the morale of his men. One suspects that he might not have been popular for such behaviour and he was later to gain a reputation for taking “a great delight in inflicting punishment”, which was ultimately to lead to another court-martial, in 1808. On this occasion he was acquitted, but with the advice “to be more moderate in future in his language”.

Willoughby had the distinction of the last man to leave Curacao when the British withdrew, just as he had been the first ashore, and he had destroyed one of the main defences, Fort Piscadero, which he had led a storming party to capture. His name next came to prominence in 1807, during the Royal Navy’s successful attempt to run a fleet up the Dardanelles (this operation – which was more successful than the attempt 108 years later – is worth a future blog). Willoughby was now serving on the “74” HMS Ajax and on 14th February, while anchored off the island of Tenedos, just outside the Straits, she caught fire. At the cost of some 250 lives she was to be a total loss. Willoughby distinguished himself in rescuing survivors but suffered burns himself. A few weeks later he was injured  in another shore attack, so badly that a surgeon pronounced his wounds to be mortal. “He had been struck by two pistol balls, one of which entered his head in the direction of the brain, where it remained through his lifetime, while the other cut his cheek in two.”

Surviving, and now an acting but not yet confirmed post-captain, Willoughby was appointed to command of the 36-gun ex-French frigate  HMS Nereide. In her he was to be involved in the 1809-11 campaign to capture the French island-base of Mauritius in the Indian Ocean. Further raids by landing parties – which Willoughby was now well versed in – led to his confirmation as “post”. In one such attack he was however wounded very seriously again –this time when a musket he was firing exploded and shattered his jaw. A complicated series of naval engagements followed – they deserve an article to themselves in due course – but they were to culminate in the disastrous Battle of Grand Port, which was to be the only significant French naval victory in the Napoleonic wars. In the course of it two French frigates, Bellona and Minerve, a corvette, Victor, and two captured East-Indiamen, Windham and Ceylon, trapped four British frigates, Sirius, Iphegenia, Magicienne and Nereide in a bay. Sirius ran aground and was burned to avoid capture,  Magicienne was similarly destroyed and Nereide lost main and mizzen masts and was beaten to a wreck before Willoughby surrendered her. Iphigenia almost escaped but was captured when a larger French force arrived.

On Willoughby’s Nereide 222 out of her 281 man crew were dead or wounded. Among the latter was – inevitably – Willoughby himself and he found himself treated in the same room as the wounded French commander, Duperré . Released after the British capture of the island ,Willoughby was duly court-martialled for the loss of his ship. He was acquitted with the comment that “the Nereide had been carried into action in a most judicious, officer-like and gallant manner.” Despite this he was not offered a new command.

Willoughby now took the most remarkable step of his career, and entered the phase which is apparently least documented. In 1812 he offered his services to the Russian government and was accepted for service on land rather than at sea. Appointed Colonel he was soon in action against the invading French and he was taken prisoner “owing to his generosity in giving his horse up to some wounded Russian soldiers, and thus became involved in all the horrors of the retreat from Moscow.” The nature of his subsequent adventures is uncertain – though this writer, Antoine Vanner, is thirsting to find out more. According to the “Annual Register” in the year of his death it was recorded that “at Leipzig had his right arm shattered by cannon shot”. How he came to be involved at this “Battle of Nations” in 1813 must be a dramatic story in his own right.

Willoughby saw some further service in the Royal Navy thereafter and was knighted twice, the second time apparently by accident because the “Sailor King” William IV had forgotten that he was already knighted. (It seems inevitable that such bizarre incidents should continue to feature in Willoughby’s career.) He was advanced to Rear Admiral of the Blue in 1817. In his later years he appears “to have got religion” and 1839 published “Extracts from Holy Writ and various Authors, for Soldiers and Seamen “, which was described as “a pious and well-intentioned compilation from a very heterogeneous set of authors”. He never married.

The “Annual Register” listed at the time of his death his other injuries besides that sustained at Leipzig : "He was eleven times wounded with balls, three times with splinters, and cut in every part of his body with sabres and tomahawks: his face was disfigured by explosions of gunpowder, and he lost an eye and had part of his neck and jaw shot away.”

Few officers of his era had survived as much – it was rightly said that “he seems to have possessed more lives than a cat with all the courage of a British lion.” One wishes to know yet more about this amazing man.

Britannia's Wolf - the first book in the Dawlish Chronicles Series

1877: Russian forces drive deep into the corrupt Ottoman-Turkish Empire.  In the depths of a savage winter, as the Turks face defeat on all fronts, a British officer is enmeshed and finds himself confronting enemy ironclads, Cossack lances and merciless Kurdish irregulars. And in the midst of this chaos, while he himself is a pawn in the rivalry of the Sultan’s half-brothers for control of the collapsing empire, he is unwillingly and unexpectedly drawn to a woman whom he believes he should not love.

Click here to learn more and to read the opening by the "Look Inside" feature
Posted by Antoine Vanner at 15:35