It is remarkable in the course of this year how little attention has been paid in the media, in popular memory or in large-scale centenary- commemorations to the events of 1915, the first full year of World War 1.  This is in marked contrast to the wave of interest shown last year when the conflict’s opening was remembered in every way possible. And yet, throughout 1915, a brutal attrition of human life occurred on all fronts and this was not least at sea, where the mine and the submarine were proving themselves more deadly than anticipated. For all that it should have been a season of goodwill, the Christmas to New Year period of 1915, from December 24th to 31st, saw horrific losses that are today largely forgotten except by descendants of the victims.

At least 27 merchant and naval ships were lost to torpedoes and mines during these eight-days. A small but vicious naval conflict, the Battle of  Durazzo matched British, French and Italian naval forces against units of the Austro-Hungarian fleet off Albania with losses on both sides. Nor was enemy action alone a danger – in this era, when large numbers of sailing craft were still in use, bad weather represented a major threat. Approximately a dozen of such craft were wrecked in this short time and some brief summaries of their fates could have used wording identical to that for similar losses at any time in the previous two centuries. One such example was the three-masted Danish schooner Dana, “ driven ashore at Craster, Northumberland, United Kingdom, and wrecked.”

The most spectacular losses involved two British units, one naval, one civilian which were lost within hours of each other on December 30th. Together, these two tragedies accounted for some 760 deaths.
HMS Natal was among the last British armoured cruisers to be built before the type was superseded by the new (and equally ill-starred) battlecruiser concept. Launched in 1905, she was one of a four-ship Warrior class, three of which were to be lost in World War 1.  These ships vessels were as large as many contemporary battleships, displacing 13,550-tons and 505-feet long.  With 23,000-hp installed power they were capable of a top speed of 23 knots. Their armament was heavy for the type – six 9.2-inch and four 7.5-inch guns, plus many smaller weapons, as well as three 18-inch torpedo tubes. Their major advantage over almost all previous armoured cruisers was that all ten main weapons were carried in turrets rather than in casemates, allowing operation in rough sea conditions. Given the size of thee ships it is not surprising that each carried a crew of up to 790.
During 1915 the Natal was attached to the Royal Navy’s “Grand Fleet”, which was based at  Scapa Flow, the vast semi-protected anchorage in the Orkney Islands, north-east of the Scottish mainland. The patrols she undertook in the North Sea were uneventful and, like the other vessels of the Grand Fleet, Natal would have spent much of her time at her moorings, waiting for news of the German fleet venturing out from its own bases. In December 1915 however she moved south to the base in the Cromarty Firth, on the Scottish east coast, and at Christmas approximately a quarter of her crew were allowed ashore on leave. On December 30th, as a gesture of goodwill, the Natal’s captain, Erik Black, invited civilians aboard for a film-show – then still a novelty. These invitees included family members of the crew as well as personnel from a hospital ship moored nearby, HMHS Drina. In the event – and luckily – many of them could not attend and only eight civilians came on board, seven of them women and three of them children. The party had no sooner started than a succession of explosions commenced which were to rip the vessel apart within minutes.


Boats rushed to the scene from nearby ships and some 170 survivors were dragged from the freezing water. Deaths, including the captain’s, were announced officially soon afterwards as 390, though the number has been estimated as being as high as 421, the increase perhaps due to later deaths occasioned by exposure. The immediate fear was that the anchorage had bene penetrated by a German U-boat which had either fired a torpedo or dropped a mine, but evidence soon indicated spontaneous combustion of unstable cordite propellent charges stored in the after magazines. Such instability caused losses in several of the navies of the period, and the Royal Navy was to lose the pre-dreadnought HMS Bulwark to this in 1914 (750 dead) as well as the modern dreadnought HMS Vanguard in 1916 (804 dead).
While Natal’s tragedy was unfolding another, almost as dreadful, was taking place in the Eastern Mediterranean. SS Persia was an 8000-ton passenger liner which had been built in 1900. Still in civilian service, on December 30th she was e-route to India and carrying not only passengers but a large amount of gold and jewels belonging to the Jagatjit Singh, maharaja of the of the princely state of Kapurthala, in the Punjab, who had left the ship at Marseilles. At midday, just south of Crete, the Persia was struck by a torpedo fired by the German submarine U-38, which has sunk another ship, the freighter Clan Macfarlane, some hours earlier at a cost of 52 lives. U-38 was commanded by Kapitänleutnant Max Valentiner (1883 –1949), who was to prove himself one of the most outstanding – and ruthless – U-boat commanders of the war. The Persia sank in less than ten minutes, taking 343 of the 519 people on board with her. Among the survivors was the British motoring pioneer Lord Montagu of Beaulieu, though his secretary and mistress, Eleanor Thornton, drowned. This lady was allegedly the model for the "Spirit of Ecstasy" mascot that is still featured above the radiators of Rolls-Royce cars.
The Persia’s sinking caused outrage since it was without warning and violated the so-called “Arabic Pledge” that Germany had given in August 1915 and which instructed U-boat commanders not to torpedo passenger ships without notice and without allowing passengers and crew to enter “a place of safety.  Kapitänleutnant Valentiner of the U-38 was to be accused of a total of fifteen generally similar incidents involving civilian shipping (out of a total of 34 ships sunk) and after the war the Allies demanded his extradition as a war-criminal. He got around this by temporarily changing his name and hiding, though he later followed a business career in his own name. He was to serve again in the Second World War, in support of the U-boat campaign, though not going to sea. He died in 1949.

There is a sad addendum to the loss of HMS Natal. The Drina, the hospital ship moored close to her, was reconverted to freighter service in 1916. The following year, as she returned from a voyage to South America with vital supplies, she was sunk off the south-west coast of Wales by a U-boat. Fifteen lives were lost.

Author Antoine Vanner talks about his latest novel, Britannia’s Spartan, in a short video.Click here to watch it.

Antoine Vanner is a rare find - an author who knows his subject matter inside out and who possesses the ability to communicate that knowledge in a gripping and highly entertaining style. His creation, Nicholas Dawlish, is so completely rendered that the reader rejects the possibility that he is a fictional character rather than a piece out of the Victorian era. Vanner knows the details of the engineering innovations in whose creation and trials Dawlish often is involved. The ships in Vanner's novels are characters as well drawn as the people who sail them. The political sides of these books are well put together as well, from London to Seoul. All of the Dawlish novels are delights in themselves. I believe, however, that Vanner continues to improve. In my opinion, Britannia's Spartan is his best to date. One waits with bated breath for each additional gem!” 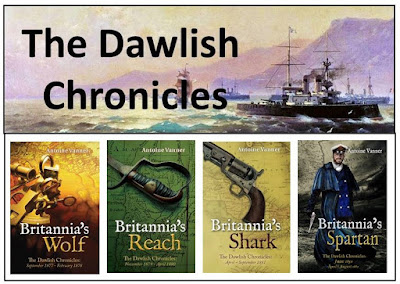