Prehistoric Seafaring along the Atlantic Coasts

A Guest Blog by Richard Abbott

We're honoured today to welcome the novelist Richard Abbott as a guest blogger and he brings us back some millennia earlier than the eras normally covered in this blog.  His focus of interest is on the earliest civilisations and you can out more about him at the end of the article. Over to Richard!


Prehistoric Seafaring along the Atlantic Coasts


When we think of ships and sailing in the ancient world, the first thing which comes to mind for most people is the Mediterranean scene. Here, within the confines of an almost-enclosed sea, vessels of varying sizes plied a coastal trade. Now, Mediterranean weather can get extremely fierce at times, so there is certainly no guarantee of safety. Nevertheless, the situation faced in northern Europe, along the Atlantic seaboard, was considerably more challenging.

Two separate strategies emerged – one for exploiting the many rivers of north-west Europe, and the other for proper sea traffic. The river option is fascinating in its own right, spawning a number of technological solutions for carrying people and cargo a long way inland, and shaping settlement patterns which are still visible today. But for today I want to focus on the seagoing option.

Today’s United Kingdom is often characterised by a north-south divide. Simplistically, we have a prosperous and densely populated south, and a rural north with thinly scattered population, supplying a lower fraction of our GDP. The industrial midlands towns have not successfully broken up this picture.

But go back to the Bronze Age, and earlier into the Neolithic, and there is no real sign of this north-south divide. Instead, the divisions of material culture are mainly between east and west. The eastern portion faces towards, and maintains, close cultural links with what we now call Belgium, Holland, Germany and Denmark. Indeed, until only around 7,000 years ago, this connection was in the physical form of a land bridge. The last remnants of "Doggerland", a fertile area occupying much of today’s North Sea, were submerged by rising sea levels rather later than 5000BC.

The western half of the country maintained a rather different material culture, sharing common features with Ireland, Brittany and Galicia. For example, closely related passage and entrance tombs are found in Portugal, Brittany, Scilly, Cornwall, Ireland, Wales, and Scotland, but not most of the rest of England, nor in much of France. Clearly the modern concept of an Atlantic coast Celtic identity has some historical truth behind it. Indeed, part of my own DNA preserves the ancestral memory of Galicia and the Iberian peninsula, where some of my remote progenitors waited for the retreat of the ice so they could head north.
These communities, seemingly separated by the sea but linked by culture – and quite probably language – kept contact with each other by ship. The ocean became a means of connecting settlements, not dividing them. Now, parts of these journeys can be conducted by small coastal hops. Elsewhere, however, you need to set off into deep water, in faith, and using skills and talents cultivated through the generations. Some of these boats were of sewn-plank design, the timbers held together by flexible wooden roots or withies rather than metal fastenings. Others were of animal skin and hide, stretched over a frame of wood or antler, like a curragh. Boats of this basic pattern are still used by the Inuit, albeit with more modern materials. Navigating the approaches to the English Channel, and avoiding the fearsome rocks and reefs of the Scilly Isles, has proved difficult for many ships in the last few hundred years. How challenging was it, I wonder, in an open boat with low freeboard, flexing with every wave?

We have hardly any examples of seagoing ships of this era, largely because little of the construction would survive intact. We can only infer the journeys they made, and the courage they must have shown, by the shared material record they left along the coastline from Spain to Scotland.

A few later hints help us. When Julius Caesar was conducting his characteristically brutal war against the Gauls, he was forced to confront their very capable navy in Morbihan Bay, in southern Brittany. We get the clear impression that purely as sailing vessels, the Gallic ships were superior – built of thick oak timbers, with iron nails and leather sails, these were ships fully capable of facing Atlantic weather. The Romans won by converting the naval conflict into what they knew best. Instead of ship to ship combat, they turned it into an equivalent land battle by using grapples and the crow – a sort of combined hook and gangplank – to immobilise the enemy and allow boarding parties to prevail.

A recent discovery claims to have identified a Roman sword on the east coast of Canada – a claim that most archaeologists are currently treating with scepticism. It seems unlikely that a Mediterranean ship would knowingly make the transatlantic crossing – though there are persistent hints that the Phoenicians might have done this the better part of a thousand years earlier. But single vessels might easily have been caught up in fierce weather and driven far from their intended course. Or the weapon might have been captured in battle by some enterprising Celt, and then carried on what was potentially a regular voyage.

Small clues indeed, but the big picture is that the prehistoric Atlantic coastline was a lively arena. Here the ocean did not divide people: rather it connected them together. Europe’s multicultural roots, and challenges, go back a great many years. 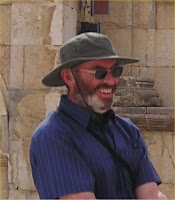 Richard lives in London, England. He writes historical fiction set in the ancient Middle East - Egypt, Canaan and Israel - and also science fiction about our solar system in the fairly near future.

So far his books have not tackled the Atlantic vessels described in the article. This represents research in progress for the next historical novel, which will explore the Late Bronze Age tin trade between the British Isles and the eastern Mediterranean. It is provisionally called A Storm of Wind, and is at an early stage.

His novel The Flame Before Us covers, in part, another bronze age group for whom the Meditteranean was important – The Sea Peoples, who settled in the coastline along from Gaza after a tumultuous approach disrupting cities from the Hittite realm down to the borders of Egypt. 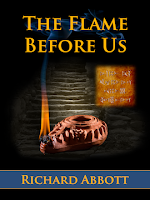 When not writing words or computer code, he enjoys spending time with family, walking, and wildlife, ideally combining all three pursuits in the English Lake District. He is the author of In a Milk and Honeyed Land, Scenes From a Life, The Flame Before Us - and most recently Far from the Spaceports. He can be found at his website (http://www.kephrath.com/) or blog (http://richardabbott.datascenesdev.com/blog/), or various social media sites.

Click here for more information on The Flame Before Us