Naval Brigades of the Victorian Era

(This is a much-expanded revision of a blog published two years ago).

Throughout the nineteenth century the Royal Navy had a strong tradition of landing “Naval Brigades” in trouble spots – invariably succeeding brilliantly.  Crises often flared up in remote locations, to which sending Army units would be slow and difficult. The Navy was in a position to land ad-hoc forces made up of marines and “bluejackets” – as seamen ashore were known – and to support this ad-hoc infantry  this most ships carried light field-guns, typically 7, 9 or 12-pounders. These were designed to be broken down into their components – barrel, wheels etc. – for easy transport and easily reassembled for action. Such Field-Gun Competitions are still held in the Royal Navy, with teams competing for the Brickwood Trophy, and can be witnessed at public displays.

In addition to such light weapons considerably larger ordnance was sometimes also landed.  Seamen’s familiarity with blocks and tackles made them especially valuable when transporting heavy equipment across obstacles and ships’ carpenters were capable of taking on any challenge from constructing gun carriages to building bridges. Naval muzzle-loaders which had been brought ashore played a major role in the Siege of Sevastopol in the Crimean War (1854-56).

An even more impressive achievement was that of the naval brigade of HMS Shannon, which dragged several of her 8-inch weapons some 600 miles across Northern India, from Calcutta to Lucknow, during the suppression of the Indian Mutiny in 1857-58. More powerful than any army artillery, these weapons were invaluable for breaching walls. Given the heat, the appalling road conditions and the fact that only bullocks and human muscle-power was available to pull the weapons, the achievement was an epic one.  Another notable example came several decades later when 4.7” guns from HMS Powerful and HMS Terrible were mounted on improvised carriages and were to play a key role in the relief of Ladysmith in 1899 during the Second Boer war. 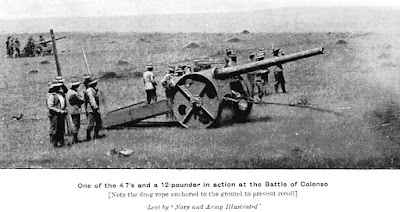 Naval forces also made use of rockets in an artillery role. Congreve rockets, some as heavy as 32-pounds, had been in use since the Napoleonic period and they were to be superseded from around 1850 by the Hales rocket. The latter did not rely on a long, trailing stick for guidance but were spin-stabilised to improved accuracy. Since no recoil forces were involved, only a light framework was needed for launching and they could be used equally easily ashore or in small boats. During the Abyssinian campaign of 1868 the only body of men in the whole army which arrived at Magdala, after a brutal march of 400 miles across the mountains, without a single man falling out for any cause, was the Naval Brigade, including its team of rocketeers.

The Navy was in advance of the Army in the use of semi-automatic, and later automatic, weapons.  Gatling, Nordenveldt and Gardner guns were attractive for deterrence – and destruction of light enemy craft. This a role became especially important when the torpedo-boat, armed with automotive “fish torpedoes” emerged as a serious threat to large surface warships. Mounted on upper-decks, or even in fighting tops on masts, such weapons could deliver a devastating rate and volume of fire and could be compared with the “Goalkeeper” close-in weapons systems mounted today for protection against missile, aircraft and fast- boat attack.
The Gatling, Nordenveldt and Gardner designs were all mechanical rather than automatic weapons, and were fired by manually turning a crank, or in the case of the Nordenvedlt, by rocking a lever back and forward. The usual round for such weapons was a heavy .45-inch bullet but Nordenveldts were also manufactured in 1-inch calibre, providing a fearsome hail that could rip apart a lightly constructed torpedo-boat.

They were equally devastating when used against mass attacks by tribesmen and other enemies in colonial warfare. These designs were to be replaced in due course by fully-automatic machine guns such as the Maxim. Though the attractions of such weapons on board ship were obvious there was less certainty as to how such weapons should be used on land and the British and other armies were tentative in committing to them, seeing them mainly as a branch of the artillery arm and being uncertain as to how they could be deployed tactically. The result was that the majority of the early deployments were by naval brigades, the main challenge for which was often action against lightly-armed, though often numerous, untrained enemies on the fringes of the empire. In such cases a combination of mechanical machine guns, on often-improvised wheeled carriages, and standard 7 or 9-pounder naval field guns could prove hard-hitting, mobile and flexible support to landed bluejackets and marines.

The most important single element in a naval brigade, whether consisting of the crew of a single small ship, or drawn from many larger ones, was the men themselves.  Seamen, no less than marines, were trained in musketry and their skill with the cutlass – a fearsome close-quarters weapon – was legendary. The cutlass, the weapon most closely associated with the British bluejacket was still considered a useful weapon. The “stamp, thrust and hack” associated with its use must have been terrifying at close quarters and regular exercising was a normal part of every ship’s routine. Tomahawks – effective weapons in close action - were carried by some ships into mid-century and beyond.

In the later decades of the century proficiency in rifle shooting was enhanced by practice at sea, made possible by use of the “Morris Tube” calibre-adapter which allowed miniature rounds to be used in the standard rifle of the time, the .303 Lee-Metford.

.
In the 1890s a large Royal Navy vessel – such as an “R-Class” battleship such as HMS Royal Sovereign – was capable of landing a “Battalion” of four “Companies”, with sixty men in each. Two 9-pounders and two Maxim machine guns, all on field carriages, were available to land with them. When fully accoutred the men carried rifles, ammunition pouches, water bottle, haversack, blanket and entrenching spade. They were trained to carry out regimental attack and defence manoeuvres – as the dramatic photograph below of “forming square” against cavalry attack so well illustrates.

A typical example of a brigade landed from a smaller vessel was that of HMS Active which came ashore in Natal in November 1878 to prevent any from Zululand. The force consisted of 174 bluejackets, 42 marines and 14 West African “kroomen”. They were equipped with two 12-pounder field guns, one Gatling and two 24-pounder Hales rocket launchers. They were to play a valuable role in the Zulu War the following year.

Once ashore a naval brigade could be considered capable of taking on just about any role, from fighting battles and besieging fortifications to restoration and maintenance of law and order. In many cases they were present before the army arrived and they often continued to play an active role thereafter. Their versatility is perhaps best illustrated by the hurried construction and manning of an armoured train at Alexandria, Egypt, in 1882, in the aftermath of British landings there.

Though there were too many such Naval Brigade operations to be listed here the most spectacular were those in The Crimea (1854-56), the Indian Mutiny (1857-58), the Ashanti War (1873-74), Alexandria (1882 - see illustrations above), the Gordon Relief Expedition (1885) and the Boxer Rising (1900). There were literally dozens of smaller actions. Particularly notable was the Benin Expedition of 1897 which was almost an entirely naval “show” without Regular Army participation. Perhaps we’ll return to this later incident in a later blog.

The original – and much shorter – version of this article was prompted by a question from a reader of Britannia’s Wolf which is equally relevant to Britannia’s Reach, Britannia’s Shark and Britannia’s Spartan.  The reader asked “Dawlish seems to be pretty comfortable fighting on shore, but he was an officer in the Royal Navy. How come he seems to be able to fight so well on land?” I have now expanded the article to include much more information.

The answer is that from his entry into the Navy in 1859 Dawlish, like other officers and ratings of the time, was trained to fight on land as well as sea and had naval-brigade experience. His skill as a horseman, learned in boyhood, proved an extra advantage. Click on the links below to learn more about his adventures ashore and afloat.