By 1782 the American War of Independence was winding down, but actions were still being fought at sea. In December of that year Captain James Luttrell (1751-1788) was in command of the 44-gun fifth-rate, HMS Mediator, off the north-west coast of Spain. Luttrell was as much a politician as a naval officer, having been elected to Parliament in 1775 (one would like to know more about he juggled his time commitments since he appears to have been respected in both roles). He opposed the war with the American colonists, believing that their cause was just, but as a serving officer he did not hesitate to fight them and their French and Spanish allies to the limit of his abilities.

At dawn on December 12th 1782 the Mediator sighted a convoy of five vessels and closed with them to investigate. Three of the ships proved to be French: the Ménagère, a 64-gun ship of the line that had had half of its armament removed to make room for carrying freight; the Aimable Eugénie, a 36-gun frigate; the Dauphin Royal, primarily a transport but carrying 28 guns. Two vessels were at least nominally American, the Alexander, a privateer, operating under a French-issued letter of marque, armed with 24 guns, as well as an un-named American brig.  They represented a formidable challenge for a single warship to take on. What was however in Luttrell’s favour was that the convoy was primarily a transport unit rather than a fighting force and was conveying supplies from France to the American rebels. It was part of a much larger logistics operation that had run during much of the war and was masterminded by Pierre Beaumarchais – remembered today as the dramatist who wrote The Marriage of Figaro, the “must-see” play of the period that was subsequently turned into an opera by Mozart.

The enemy convoy shortened sail and formed a line of battle, obviously prepared to fight off any attack. Luttrell’s tactic was to drive straight at it, taking advantage of the handiness of the Mediator, hoping to dislocate the enemy line, cause what damage he could, and run should the action not develop to his satisfaction. By 10 a.m. the range had closed sufficiently for the Ménagère – which Luttrell still believed to be a fully-armed ship of the line – to open fire. The broadside she released came from her upper deck only, demonstrating that she was only partially armed and thereby considerably less dangerous than she appeared. This encouraged Luttrell to drive through the enemy line (the tactic that Nelson would later make his trademark) and cut off the Alexander. A single broadside was enough for this privateer to strike her colours while the remaining French vessels and the American brig made their escape. Luttrell put a prize crew aboard the Alexander and took some 100 prisoners from her on board the Mediator. This must have taken considerable time, and it is an indication of Luttrell’s confidence in Mediator’s speed and sailing abilities – not to mention in her crew – that he believed that he could catch up with the retreating enemy.

It took five hours to get in range of the Ménagère, which had been by then separated from the other ships. She might well be under-armed but she still carried heavy guns and Luttrell did not want to close the range further. He maintained instead distant but ineffective fire. The weather was now deteriorating and a sudden heavy squall caught Mediator and heeled her over so that water poured in through her lower-deck gun ports to “knee depth”.  This was when the professionalism of both officers and seamen showed to advantage. Despite this setback, Mediator was soon in a state to resume the chase. It was dark before she caught up with the Ménagère, which was by now within five-miles of the shelter offered by the Spanish naval base of Ferrol. He French captain’s nerve seems to have failed at this point and before Mediator could deliver a broadside he struck his colours. The same process was repeated as with the Alexander – a prize crew put on board and prisoners, some 200 in this case, taken on to the Mediator and both ships then bore away from the Spanish coast. At dawn the escaped French frigate and American brig were sighted – both had been damaged in the earlier fighting – but by now Luttrell’s crew was seriously depleted through provision of prize-crews. Mediator had taken only seven casualties but was now manned by only 190 men, compared with the more than 300 prisoners on board. Luttrell reluctantly decide not to engage these enemy vessels and set course for Plymouth with his prizes.

A new drama played out during this voyage back to Britain. The American captain of the captured Alexander, one Stephen Gregory, and some of his officers had been accommodated in the Mediator’s gun-room. They managed somehow to establish communication with the other prisoners on board and hatched a plan for a take-over of the ship. The signal for action to commence was that one of the eighteen-pounders in the gun room was to be discharged – one wonders how Gregory managed to acquire the necessary powder to prime it – and in the resulting confusion the prisoners were to burst out of the hatchways.

The gun was fired during darkness but Mediator’s marines had been well posted at all exits and the prisoners were unable to break out. Luttrell went to the gun-room and found it on fire and everything within it shattered. Gregory and a single accomplice were found there, miraculously unharmed. They were immediately clapped in irons but it is typical of the gentlemanly standards of the period that the French officers, who had taken no part in the plot, continued to dine, under parole, at Luttrell’s own table.

In this dramatic action, in which boldness and confidence had proved the decisive factor, a single 44-gun ship, with a crew already depleted by provision of manning for earlier prizes, took on a force deploying 132 guns and 634 men. Casualties amounted to seven wounded. The enemy casualties were low also – a total of ten dead and fifteen wounded on the two vessels captured, an indication in itself of the lack of will which might otherwise have secured a different result.

Considering Luttrell’s splendid victory, it is sad to record the he died young, at only thirty-seven and that his potential for high command was never realised. 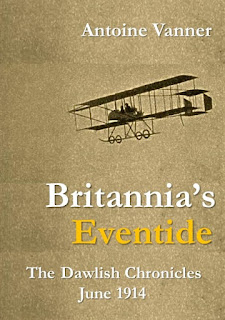 To thank subscribers to the Dawlish Chronicles mailing list, a free, downloadable, copy of a new short story, Britannia's Eventide has been sent to them as an e-mail attachment. If you are already a subscriber, and have not received the e-mail, please check in your Junk folder in case it has been classed as Spam.

If you have not already subscribed to the mailing list, youcan do so by clicking here. You will then get a copy of the story by e-mail.

Britannia's Eventide is a snapshot of a critical moment in the later years of Admiral Sir Nicholas Dawlish and his wife, Lady Florence, whom you will have met earlier in their lives in the five books of the series so far. It is not available elsewhere at this time. It is a companion piece to the short-story Britannia's Eye, which is a bonus-addition to the novel Britannia's Amazon, and which gives a glimpse of Nicholas Dawlish's childhood.

I hope that you will enjoy the story, no less than the novels in the series. I always value feedback, so don't hesitate to get back to me. I'd especially like to know what you think of the idea of free short-stories that fill in gaps in Dawlish's career that may not justify full books.