Retrospective 2016: a Baker’s Dozen from a year of blogging

The year now slipping away was an active one for me as regards blogging, the publication of the 5th Dawlish Chronicles novel, Britannia’s Amazon,  the completion of the 6th novel – due out early next year. Other highlights were running a workshop on plotting at the Weymouth Leviathan Literary Festival in March and helping organise the Historical Novel Society’s conference in Oxford in September.

I published 74 blogs during the year, including eight from guests who included Helen Hollick (twice), Richard Abbott (twice), Chris Sams, Tom Williams, Nykle Dijkstra, Catherine Curzon and Geri Walton. As usual, my logs fall into three categories: the Age of Fighting Sail, the Victorian Era and the Early 20th Century. For the 2016 retrospective I’ve picked out one blog for each month of the year and I’ve added a thirteenth for good measure. I hope you’ll enjoy them.

January: War in the North Sea, 1864 - The Battle of Heligoland

In 1864 the small nation of Denmark was attacked by the combined forces of Prussia and Austria-Hungary. The Danish resistance was to be heroic, and never more so than when naval forces clashed off the island of Heligoland in a battle now largely forgotten outside Denmark. Click here to read about this action.

The survival of 200 men from a battle-damaged and hurricane-battered ship of the line in 1782 was due to the outstanding leadership and professional competence of a 20-year old officer, Lieutenant Henry Inman (1762 –1809), who was later to be a noted frigate commander. Clickhere to read about this drama.

The greed and excesses of the Fitzcarraldo rubber-boom era on the Amazon, slavery and exploitation of helpless indigenous people, and Britain’s laureate of Empire – all linked by a Royal Navy cruiser some 2000 miles from the sea. Click here for this remarkable story.

The clash between the Austro-Hungarian and Italian navies off the Dalmatian island of Lissa in 1866 was to be the only large-scale battle fought by first-generation ironclads. It was remarkable not only for the success of ramming tactics but for the aggressive and capable leadership of the Austro-Hungarian commander, Wilhelm von Tegettoff. An earlier blog saw him in action against the Danes two years earlier but his day of greatest glory was to be at Lissa. Click here to read about thebattle.

May: An epic stand against French oared-galleys in British Waters – 1707

When one thinks of battles involving oared galleys one thinks automatically of actions in the Mediterranean. The galley’s day as a fighting vessel – a long one, stretching back two thousand years – ended in the early eighteenth century and as such they do not figure in most accounts of sea warfare of that era, as “Fighting Sail” reached its apogee of efficiency. I was therefore all the more surprised to come on an account of an epic last-stand by a single British frigate against French galleys in the Thames estuary in 1707.  Click here to read about it. 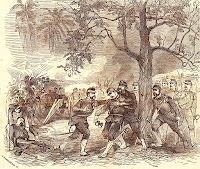 The history of the Netherlands in the 19th Century is a closed book for most non-Dutch, not least because of the incorrect perception that “little happened” and as the country was at peace in Europe from 1831 to 1940. The Netherlands were however involved in a series of colonial campaigns in the vast territory of the Dutch East Indies, which constituted most of what is the present-day nation of Indonesia. The greatest – and most sustained – of these conflicts was the series of difficult campaigns from 1873 to 1914 which became known as the Aceh War. Click hereto read how it started.

Handsome and courageous, obviously a born leader, Sir James Lucas Yeo (1782 – 1818) seems like a figure who steps from the pages of naval fiction. He is best remembered today for his command of British forces on the Great Lakes in the War of 1812 but this naval officer’s rapid ascent to such a significant command started with a spectacular attack on coastal fortifications in 1805. This was the first of three articles dealing with Yeo’s career. Click here to read it. 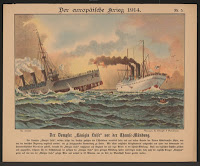 Within 48 hours of Britain and Germany going to war on 4th August 1914, one British ship and one German ship had been destroyed by each other. The high casualties involved brought home to both nations the stark reality of how murderous war at sea would prove in the conflict now embarked upon. Click here to read of these events.

September: The Capture of Curaçao 1807

In just a few hours on New Year’s Day 1807 the Royal Navy captured the Dutch base at Curaçao in the Caribbean with almost ludicrous ease despite its powerful defences. Failure to recover in time from hangovers resulting from the previous night’s festivities may have played a role… Click here to read about it.

A fast-sailing American trading schooner carrying eleven thousand pounds of coffee and forty-two thousand dollars in coins was hijacked by her mutinous crew in 1816. But the voyage that followed brought them to a very unlikely destination and was to end in a mystery that is still unsolved. Click here to read of this savage affair.

Two evenly-matched frigates, one British, one French encountered each other off the entrance to Chesapeake Bay in 1782. A French squadron of eight ships of the line were drawing close however and flight rather than flight seemed the more reasonable option for the British ship. That was not however as it worked out…  Click here to read about it.

December: HMS Mediator at odds of Five to One, 1782

In the closing months of the American War of Independence an out-gunned British warship engaged an enemy force at odds of five to one. It proved to be one of the most remarkable actions of the period – and had a unlikely link to Mozart’s opera, The Marriage of Figaro! Click here to read about it.

I was lucky to be approached by Nykle Dijkstra, a Dutch reader of my blog who is interested, among much else of a nautical nature, in the art of the great Age of Fighting Sail. A student of maritime history, Nykle told me something of what he was undertaking add I invited him to prepare a blog. It turned out to be a superb one, as you’ll see, and it reflects some detective work on his part. It all starts, as good detective stories so often do, with the discovery of an old sketch and a few written pages. What followed led to him striking gold – the world of Hornblower and Jack Aubrey brought to life. I hope you enjoy his article as much as I did. Click here forit.

And a little about my 2016 book: Britannia’s Amazon, the fifth in the Dawlish Chronicles series.

Click here or on the imagebelow for more information. 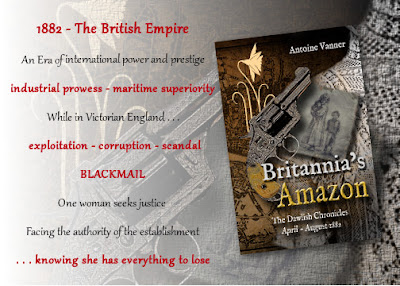 If you have not already subscribed to the mailing list, you can do so by clicking here or on the image above.  You will then receive a copy of the story by e-mail.