THE WICKEDEST PIRATE PLACE IN THE WORLD

For me, Antoine Vanner, one of the most unexpected but very  rewarding outcomes of publishing my first book some years ago was that it brought me into contact with a network of other writers. They proved almost invariably to be delightful, fascinating, engaging and generous people whom I would never otherwise have met and they all work in the Historical Fiction genre in all its various forms. They have immersed themselves in specific periods and in conversation, no less than in their fiction, and it is impossible not to be infected by their enthusiasm for bringing past eras to life, no matter how different they may be to one's own chosen period.

Not least among these new friends is Helen Hollick, who is equally at home in the Arthurian, Norman Conquest and early Georgian periods. She is now adding to her substantial fiction output with her first non-fiction book, "Pirates: Truth and Tales" (links later in article). To mark the publication I invited Helen to contribute a guest blog - not for the first time - and what she has come up with has one of the most irresistible titles imaginable!

THE WICKEDEST PIRATE PLACE IN THE WORLD  - PORT ROYAL
By Helen Hollick
Pirates. We tend to like pirates – at least the ones from the ‘Golden Age’, which was a very short period in the early eighteenth century, from about 1715 – 1722. Before that, in the latter 1600s, pirates were better known as privateers and buccaneers - ‘legal’ sea-faring terrorists. If you had a ship, a crew, plenty of gunpowder for a variety of weaponry (including cannons), and could persuade your King to provide you with a Letter of Marque, you could sail off in merry pursuit of the Spanish. Or the French. Or the Dutch – or a variety of all three, but mostly the Spanish.

England was often at war with Spain. It all sort-of started with the Armada of Elizabeth I’s reign. The Spanish took their shattering defeat badly. In fact, they tried again in March 1719 as an attempt to place Catholic James Stuart on the throne of Britain, instead of George I of Hanover. The Spanish Navy were obviously not very good at their history lessons, for almost exactly the same thing happened as that previous attempt – but without Sir Francis Drake playing bowls at Plymouth Hoe before setting off to do battle. (And before you think it, no, he was not wasting time. He was an experienced seafarer and knew perfectly well that he had several hours before he could set sail because the tide was out.)

This second Armada set sail from Cádiz – without James, who had failed to reach the rendezvous point in time. On a previous attempt at landing in Scotland to claim his throne he fell ill and returned home to France. On several other occasions he found excuses to clear off on the eve of battle. He would not, I think, have made a Good King, and he was nothing like his more famous son, Bonnie Prince Charlie. So off sailed the Spanish, only to have their fleet wrecked by a horrendous storm in the English Channel.

Because of these attempted invasions (and a few additional reasons involving religion, which we won’t go into here) the Spanish were not liked by the English. Squabbling, however, was an expensive business. Fortunately (for the English) there were a lot of Spanish Galleons returning from the South Americas and Mexico laden with treasure… enough to pay for the mounting financial deficit caused by war. Hence, open season for privateers to plunder any Spanish ship they could find. The only rule, the loot gained had to be shared with the Government’s Representative, the Admiralty and the King.

Columbus discovered Jamaica (although there were native tribes already there) and for more than 146 years Spain dominated the island. But the British Navy realised the island’s strategic importance for defence, its flat beaches were ideal for careening (cleaning the underside of the ship), and its deep-water anchorage was a perfect sheltered haven. In 1655 Jamaica became British. They set about building Fort Cromwell, which within a couple of years was tactfully renamed Fort Charles; such are the consequences of political upheaval.

In the days of Henry Morgan who was raiding the Mexican coast around 1665, Port Royal welcomed in-bound ships as if it were a celebration feast day. Everyone in town would drop what they were doing and hurry to the waterfront to see what treasures were to be unloaded. The air was filled with ‘oohs’ and ‘ahs’, somewhat like a 17th century version of a modern high-prize TV quiz show. Officials would board a ship as soon as it dropped anchor to remove 1/5th of the plunder for the King, 1/10th for the Admiralty and 1/12th for the Governor. (Even pirates paid taxes.) That still left a lot for the captain and crew. Henry Morgan (and yes, the Rum Brand was named after him) became Governor in 1675, and Port Royal established itself as a notorious pirate-paradise - the Wickedest City in the World. Every pirate worth his (or her) salt would have dropped anchor there at least once. Such famous names as Blackbeard, Benjamin Hornigold, Charles Vane and Calico Jack Rackham, although for these two their last visit was not exactly pleasant. They were hanged there in 1720. (Vane maybe a year later, the records are uncertain.)

By 1692 6,500 to 10,000 people occupied fifty-one acres of land on Jamaica, with over 2,000 buildings. A quarter of the population would have been slaves, with another quarter a fluctuating population of sailors, pirates and merchant traders. Nor was it only the wealthy citizens who possessed valuable goods. Spices, silver, jewellery, porcelain and cloth abounded from Big House to Tavern alike. Port Royal was a thriving boomtown and everyone living in it during those years of decadence enjoyed those consumer-good luxuries to the cutlass-hilt.

But maybe the Spanish had the last laugh. On June 7th 1692 Port Royal met a devastating fate by something more omnipotent than any seafaring pirate could ever hope to be.

An earthquake struck and the sea swallowed two-thirds of the town in one gulp. Geologically speaking, for the area to remain underwater the earthquake must have lowered the level of the sea floor, one plate slipping under another. A tsunami recedes again, leaving destruction and acres of mud. Old Port Royal is now an underwater town, in effect, a piratical Atlantis.

There are some excellent documentaries, including images of what Port Royal would have looked like on the National Geographic website:
www.nationalgeographic.com.au/tv/wicked-pirate-city

4,000 people lost their lives, many killed by the earthquake and tidal wave which followed, the rest by injuries and disease. Port Royal was never rebuilt, the survivors moved across the bay and founded Kingston instead.

As for Henry Morgan, he died, probably of liver disease caused by excessive drinking, in 1688 and was buried on the spit of land that the earthquake swallowed. His bones are there today, somewhere beneath the surf and the waves, visited only by the fishes.

After Morgan’s death, attitudes towards piracy changed. Wars with Spain were less frequent and trade was becoming more important. Buccaneering had ceased, and piracy took its place hitting the profits of wealthy merchants back in England. It had to be stopped. An anti-piracy law was passed in 1687, although it was not taken seriously until 1715, when Henry Jennings, after acquiring a shipload of treasure from a Spanish fleet wrecked off the coast of Florida, was turned away as a pirate. Forty-one men were hanged during one month alone in 1722. Far from welcoming pirates, Jamaica became their nemesis. 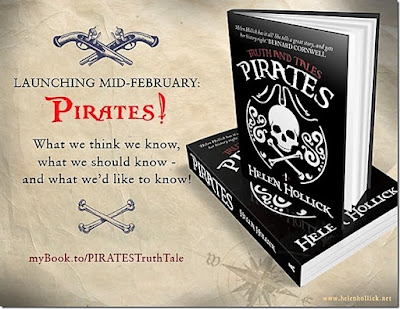 Helen’s latest book, Pirates; Truth and Tales is a blend of non-fiction and fiction, looking at the fact and the fiction of pirates such as Blackbeard, Edward Low, Bartholomew Roberts – and Jack Sparrow, Captain Hook and Pugwash, with excerpts from her own Sea Witch Voyages and the novels of Anna Belfrage, Helen Hart, James L. Nelson and other fiction authors. ‘Pirates,’ she says ‘because of the movies from Errol Flynn to Johnny Depp have always been a favourite topic. I wanted to explore some different pirates – and the fictional tales alongside their factual lives.’

Available now in hardback in the UK and in early May in the USA (but you can pre-order)
myBook.to/PIRATESTruthTale