Palmyra: a world-legacy under threat

For me Friday evening is the time of the week when I write my main blog, usually on a historical topic from the 18th or 19th Centuries, often, but not invariably, naval in focus. I usually pick my subject earlier in the week, check out various facts and select illustrations so that I’m ready to start hitting the keyboard directly after dinner. This Friday evening was to be no exception and I had selected a subject – one relating to a dramatic naval incident in the Napoleonic period – and I had assembled my material. In the event however an item on today’s news has so outraged me that I find it impossible to write about anything else. This item related to the advance of ISIS forces on the ancient ruins of Palmyra in Syria, bringing with them the threat of the same type of epic vandalism that they have already wreaked on the remains of the Assyrian city of Nimrud.

My blog has therefore no nautical dimension but it does relate to history in its most basic form. It raises issues as to how we regard and value the past and how we should hope to hand on to future generations, with reverence and understanding, the lessons it has taught us and the achievements of human art and intellect which it has given us.

Some sixteen months ago I wrote a blog (click here to read it) in which I mourned “the tragedy of the end of normal things” in Syria. The situation that so depressed me then, when the word ISIS was associated only with an Egyptian goddess, or with the Thames at Oxford, seems now, in comparison, to have been immeasurably less terrible than today's. Since then we have seen barbarism on a massive scale, targeting not just today’s humanity but the very past itself. Not only have we seen huge numbers of people murdered with incomprehensible savagery, driven from their homes and persecuted for their beliefs, but we have seen war declared on the memory itself, devastating archaeological sites and aiming to wipe away all trace of past civilisations.

I visited Syria twice. On the first occasion, some fifteen years ago, I had gone there on business, but I was able to take some brief time off to see something of the country’s amazing heritage. The most impressive site of all was Palmyra, the ancient city that lies roughly half-way between Damascus and the Euphrates. It thrived in the Greco-Roman period – though its history was much longer – and its name will always be associated with its most famous ruler, Queen Zenobia.

Palmyra was a vital stop on the long trade route that led from the Mediterranean to as far away as China and its wealth was based on trade rather than military power. Though surrounded by desert on all sides, it was centred on a palm oasis so that agriculture could flourish about it and sustain its life. The site is vast, roughly a fifth of a square mile, and though most of the building have been tumbled by earthquakes over the centuries one is still overcome by its grandeur. I myself was overcome by what I saw and I resolved that I would return at some stage to enjoy the site – and many other splendid ones in Syria – at my leisure. 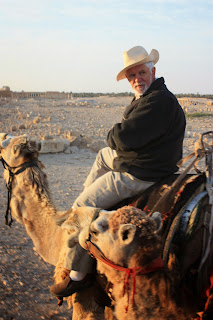 I returned to Syria in 2009 – quite providentially, as it was the last year before civil war erupted there – and I did so as a tourist. The dates of some of the sites visited ranged from the very dawn of human civilisation, through the Greco-Roman, Byzantine and Crusader eras, right up to the last days of Ottoman rule. My earlier blog tells something about this trip. The most memorable experience of all was however my return visit to Palmyra and the opportunity to walk through its paved streets, to marvel at the scale and beauty of those buildings still standing, to sit in a well-preserved theeatre where audicnes had once enjoyed the plays of Sophocles and Euripides, to imagine peoples of a dozen nationalities and languages interacting in this hub of trade. One of the best memories of my life is having ridden on a camel through the city at dawn, the air still cool, the sun just coming up and casting long shadows. The photographs below, which I took during my visit, may give some idea of this magical place.

And now it’s all at risk. Blind ignorance and intolerance threaten an inheritance that belongs not only to Syria, but to the entire world. Grace and beauty that has survived earthquakes and military conquests of the past may at last succumb to the bulldozers, axes and explosives of modern barbarians. In passing I may voice my disgust for the term “militant” that the BBC has chosen to apply to such people. In the past this term always had something about it of the student radical or the combative trade union, people and organisations prepared to make vigorous protests but who accepted that there would be boundaries, straying beyond which would invalidate the dignity and justice of their cause. To apply the same term to those who have declared war on the civilisations of the past, no less than on innocents of the present, is inappropriate in the extreme. It’s time to call a spade a spade.

The one glimmer of hope is that Palmyra has not fallen yet to ISIS, that it may yet be saved for the delight and inspiration of countless generations to come.

Let us hope and pray that it will be so. 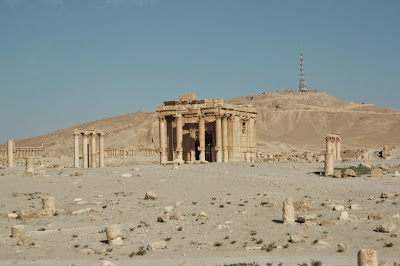