Trawlers at War in the North Sea, May-June 1915

A hundred years this month the sinking by German U-boats of three large ships, one civilian, two naval, alerted the world to the fact that the submarine was now a serious menace. A mere decade before the first puny craft to enter service in half-a-dozen navies were regarded as little more than an expensive and puny novelty. Now they represented a serious threat both to trade and to conventional naval forces. Their impact went far beyond the tactical however. On May 7th the liner Lusitania had been sunk off the south coast of Ireland with massive loss of life, some of it American, triggering outrage in the United States and almost bringing it into the war. On May 25th and 27th respectively the British pre-dreadnought battleships Triumph and Majestic were sunk of Gallipoli by a German submarine, forcing withdrawal of all heavy naval units from providing fire-support to British and Empire forces. It was the first step in the road to recognition that the campaign to force the Dardanelles could never succeed, and to final evacuation early in 1916.

The focus on these three spectacular U-boat actions has however drawn attention for a much lower profile, but equally serious, U-boat offensive against a humbler target, Britain’s fishing fleet. Hundreds of trawlers and drifters had been active in the North Sea before the war and fish represented an important component of the British national diet. One surprise of the early months of World War 1 was just how serious a hazard mines represented – indeed the brand new super-dreadnought HMS Audacious had been sunk by one within two months of the start of the war. It is indeed surprising that the mine should have been so underestimated by the Royal Navy, since they had proved their worth ten years before in the Russo-Japanese War. Fixated as it was on powerful battleships, fast battlecruisers and swarms of light cruisers and destroyers for supporting heavier units in fleet actions, the Royal Navy had made no provision for mine-sweeping craft. The response – a creditably fast one – was to commandeer large numbers of small civilian vessels for hasty conversion for this role. Trawlers, already equipped with net-handling winches, were especially suited to such work and indeed a flotilla of them, still manned by civilian crews, had attempted, unsuccessfully, to sweep the Dardanelles of Turkish mines at the start of the Gallipoli campaign. The trawlers’ sea-keeping ability also made them suitable for anti-submarine patrolling, and a number were hastily equipped with light naval guns.

The sudden conscription of large numbers of fishing craft placed an extra burden on those which remained in fishing service. Britain, a major food importer, and with her supply lines threatened by U-boats, was now more dependent than ever before on fish catches and the North Sea, now a battleground, was the usual source. This then was the background to the German U-boat offensive against Britain’s fishing fleet. The losses were very heavy. In May 1915 – the month of the Lusitania, Triumph and Majestic sinkings – four U-boats, U-9, U-30, U-39 and U-41 – sunk a total of 23 trawlers in the North Sea. Six of these became victims on May 2nd and no less than eleven on May 3rd.

Serious though the losses were in material terms the crews remained relatively unscathed. At this stage of the war, before maritime aircraft and semi-rigid airships were available for systematic reconnaissance, the U-boats could surface with little risk of detection by any but their targets. Only the largest civilian vessels carried radios, and none of the trawlers. These latter were judged by the Germans as too small to merit expenditure of a torpedo. The most common U-boat tactic was to surface, order their targets’ crews to abandon ship in their boats, and then sink them by gunfire. In the case of larger craft, German boarders placed explosive charges to blow out the bottoms. Mines represented a more deadly hazard for the fishermen. Six trawlers were victims in May 1915, a typical case being the Uxbridge, which on the 3rd. of the month caught a mine in her nets, which then exploded and sank her.

Given the scale of the losses to the fishing fleet it is gratifying to learn of a U-boat receiving its come-uppance at the hands of a trawler, albeit one taken into Royal Navy service as a patrol vessel.  The German submarine U-14 had come on station east of the Scottish coast at the beginning of June. On the 2nd and 3rd of the month she sank two neutral ships, the 1670-ton Danish Cyrus and the 2240-ton Swedish Lappland respectively. The campaign against the fishing boats was still in full swing, with seven sunk by other U-boats on June 3rd and five on June 5th. The U-14’s newly commanding captain, Oberleutenant Max Hammerl, would have had every expectation of joining in the massacre. His luck was however to run out two days later, on June 5th, off Peterhead, when he encountered what appeared to be a fishing trawler. The Oceanic II was indeed a trawler, but one that had now been armed.

Hammerl, unsuspecting, ordered the gun crew of his surfaced U-14 to fire two warning shots across the Oceanic II’s bows. Joined now by a second trawler, the Hawk, the Oceanic II returned fire at a range of one mile. Hammerl responded by ordering diving – a manoeuvre that would almost certainly saved his craft had there not been a problem with the vents of the forward diving tanks. The U-14’s stern sank but the bows remained above water, a target into which the the Oceanic II’s gunners poured fire while the Hawk steamed in to ram. This ended the contest. Hammerl ordered “abandon ship” and all six officers and twenty-one enlisted men managed to escape and be taken prisoner. Hammerl himself went down with his submarine.

Both trawlers had done well in the action. Humble they might have been but they had scored a significant success, one that was to be repeated by many other equally humble craft in the coming years of the war.

If you want to read about adventure in the late 19th Century, as sail yielded to steam, and as new weapons made their deadly appearance then try "Britannia's Shark". You can get it in Kindle or paperback format. Click on the image below for details and to read a sample. 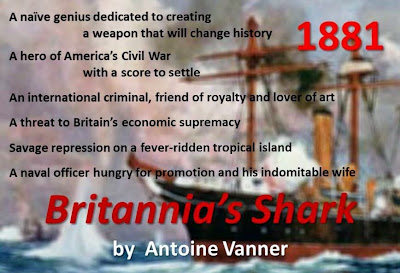