The Shortest War in History: Zanzibar 1896

The island of Zanzibar, off the coast of modern Tanzania, was to be the scene in 1896 of what has been described as “The Shortest War in History”. It lasted a mere 38 minutes but in this short period it proved to be very bloody indeed.

Primarily an Arab settlement, with strong links to Oman, Zanzibar’s wealth had been based on the slave-trade, with expeditions reaching far into East and Central Africa to capture prisoners who would be shipped to the slave markets of Arabia. In 1858 the Zanzibar’s ruler, the Sultan, threw off allegiance to Oman and declared independence. This was accepted by Britain – though formal recognition had to wait to 1886 – and in the coming decades the island, and the similarly named capital, provided a base for the Royal Navy’s anti-slave trade operations along the East African coast. There was a definite paradox here – many Zanzibar Arabs were heavily involved in the slave-trade and the institution remained legal on the island.

By the 1890s the newly-forged German Empire, hungry for colonies, was establishing itself in Tanganyika, the mainland directly west of Zanzibar, while British interests were similarly engaged in setting up a colony in Kenya, further north. German efforts to suppress slaving were resented by Arabs traders, resulting in armed clashes, and leading also to significant Anti-German resentment on Zanzibar itself. Britain and Germany were now vying for supremacy in East Africa and Zanzibar, in view of its position, assumed strategic significance.

Germany was to do well out of its opposition to British control of Zanzibar for in a treaty signed in 1890 it pledged to give up its interest in there in exchange for Britain handing back to Germany the island of Helgoland in the North Sea. Occupied by Britain since 1814, this small island was ideally placed to protect the approaches to both the new German naval base of Wilhelmshaven and the western entrance of the Kiel Canal. Had Britain retained Helgoland and fortified it heavily, as the Germans were thereafter to do, the course of both world wars might have been significantly different.

Britain had recognised the sovereignty of Zanzibar and its Sultan in 1886, and the Zanzibar-Helgoland Treaty strengthened its position. A new Sultan, Ali bin Said, came to power in the same year as the treaty.  Zanzibar was declared a British protectorate, the slave trade was banned, though  ownership of slaves remained legal, and a British nominee, Lloyd Mathews, was appointed to lead the Sultan’s cabinet. A further measure of Britain’s power was that it was accepted as having a veto over the appointment of future sultans. Lloyd Mathews had been seconded by Britain as long before as 1877 to create a small, modern, Zanzibari army which was to number in due course over 6000 men. He carried the rank of Brigadier-General and in due course was to become the real power behind the throne.

Sultan Ali died in 1893 and was succeeded by Hamad bin Thuwaini, who was acceptable to Britain. Zanzibari opinion was now however growing hostile to British presence – the slave-trade ban was starting to bite – and the Sultan was authorised to recruit a 1000-man “bodyguard” to maintain order. This proved to be a double-edged sword and British residents were soon complaining about the bodyguard’s behaviour.

Sultan Hamad lasted three years, dying suddenly on August 25th1896. His nephew, Khalid bin Bargash, who was suspected by some as having been involved in his uncle’s death, immediately ensconced himself in the palace complex at Zanzibar Town, with the obvious intention of taking over as sultan. Britain preferred another candidate however, Hamid bin Mohammed, and intended to use its veto. Khalid was warned accordingly but he proceeded anyway, massing forces loyal to himself at the palace complex. This was a residential wooden structure, modern in construction, provided even with electricity. By evening Khalid had almost 3000 supporters under arms, about a quarter of them defectors from the army, the bulk of which remained loyal to their British commander. Khalid’s force also had several machine guns, two modern 12-pounders and a 17th-century bronze cannon. Also declaring for Khalid was the crew of the royal yacht, the HHS Glasgow.

Mathews was having none of it. The force immediately available to him to oppose Khalid was small numerically – some 900 Zanzibari soldiers, many of them ex-slaves, and commanded by a Lieutenant Raikes who was seconded from Britain’s Wiltshire Regiment. They were supplemented by up to 180  marines and seamen landed from a small Royal Navy cruiser, HMS Philomel and two gunboats, HMS Thrush and HMS Sparrow, which were conveniently in the harbour. These vessels’ firepower was considerable – Philomel mounted eight 4.7-inch guns and eight 3-pounders, while the sisters Thrush and Sparrow each carried six 4-inch and two 3-pounders. The three ships also carried numerous machine guns. Fully exposed at the palace complex, which extended along the water-front, Khalid’s supporters would have been well advised to disperse – which they did not.

The late sultan was buried before nightfall, in line with Muslim custom, and Khalid, despite further warnings from Mathews, proclaimed himself as his successor. Zanzibar was linked to the outside world by telegraph and authorisation was asked from the British Government in London for the naval vessels to open fire should circumstances demand – there was still hope for a peaceful settlement.

The stand-off continued, with Khalid showing no intention to back down. Yet more Royal Navy might  arrived, another small cruiser, HMS Racoon – six 6-inch and eight 3-pounders – and the flagship of the Cape and East Africa Station, HMS St. George. Any one of the other ships, even the gunboats, would have been sufficient for the job in hand, but the St. George was an absolute sledgehammer. An Edgar Class protected cruiser of 7350 tons, she carried no less than ten 6-in guns and twelve 6-pounders. Her greatest power lay however in the two massive 9.2-inch ship-killers carried as bow and stern-chasers. Also arriving was authorisation from the British Prime Minister, Lord Salisbury to “adopt whatever measures you may consider necessary.”

The last round of negotiations failed. It is difficult at this remove to understand how Khalid could have believed he had any hope of withstanding the forces against him.  The British naval commander, Rear-Admiral Harry Rawson, made it plain that if Khalid had not submitted by 9000 hrs the following day, fire would be opened. Through the afternoon all commercial shipping left the harbour and British residents were taken on board the St. George and a British merchant ship. Fear and foreboding must now have reigned in the city – a British official wrote later that "The silence which hung over Zanzibar was appalling. Usually drums were beating or babies cried but that night there was absolutely not a sound."

On the following morning, August 7th, while the British ships were readying for action, final warnings were issued to Khalid. He refused yet again to stand down. At 0900, at the exact moment the ultimatum ran out, Racoon, Thrush and Sparrow opened fire simultaneously on the palace. The wooden structure, never designed for defence, and now barricaded with crates and bales, offered no protection to Khalid’s 3000 supporters from the hail of high-explosive shells delivered at point-blank range. Some later reports indicated that Khalid fled for safety at the first shot, though others credited him with staying longer.

As the bombardment commenced the Zanzibari yacht Glasgow opened fired upon the St.  George with her seven 9-pounder guns, an unwise step in view of both ships’ relative gunpower. Fire was returned by the St. George and the Glasgow was sunk, her crew then being rescued by Royal Navy launches.

The shelling of the palace continued for 38 minutes. The palace was now on fire and Khalid’s flag had been cut down. Around 500 Zanzibaris, women as well as men, had been killed or wounded and it remains unclear how many were combatants.  Opportunistic looting during the chaos also led to some 20 deaths in the Indian quarter. Though Raikes' Zanzibari troops had come under fire as they approached the palace, none were wounded, and the sole British casualty was a Petty Officer wounded, though not fatally, on the Thrush.

By the afternoon the town was under British control and seamen had been landed to combat, successfully, the fires spreading from the palace to threaten customs sheds containing explosives. The acceptable candidate, Hamid bin Mohammed, had been installed as sultan. He was to be no more than a puppet and he was required shortly afterwards to abolish slavery. The process was to prove a slow and bureaucratic one, just over 17000 slaves being emancipated in the next decade, out of a slave population that had been estimated at 60000 in 1891.

And what of ex-Sultan Kahlid following his two-day reign? He found asylum, with some followers in the German consulate, where he was guarded by German sailors and marines. British forces remained outside to arrest him should he come out.  The consulate bordered on the harbour and on October 2nd a boat from the German cruiser SMS Seeadler pulled alongside. Khalid stepped on board and was taken to the cruiser, and then on to Tanganyika, without setting foot on Zanzibari soil. He remained there until captured by British forces during World War 1. He was exiled in the Seychelles and St. Helena before being finally return to East Africa. He died in Mombasa in 1927.

The British players were highly regarded for their actions during the crisis. Somewhat ridiculous Zanzibari decorations (including the “Order of the Brilliant Star of Zanzibar”) were distributed freely and Rear Admiral Rawson was knighted. Rawson’s career had still a long way to run and his most famous exploit was to come in the following year.

We’ll be looking at that in a future blog.

Love historical and naval/military fiction? Looking for an exciting read ? Interested in conflict in the Victorian period? Click on the image below to learn more. You can read the opening section and plunge yourself into a world of danger, betrayal and merciless conflict in which neither side has clean hands and one man battles to maintain his integrity. 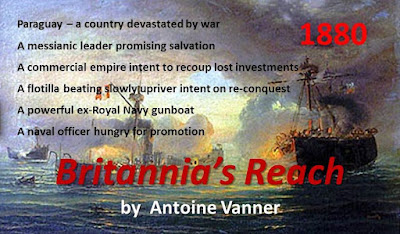