The sinking of the slave ship Phoenix, 1762

One well-known image above all symbolises the evil of the Atlantic Slave trade. Some two and a half centuries later it still has the power to outrage and to move. It is a diagram that was published by British abolitionists in 1788 and which illustrated the “Tight Packing” on a typical slave ship, the Brooks. It shows some 400 human beings confined directly on the lower deck, or on shelving 31 inches above. 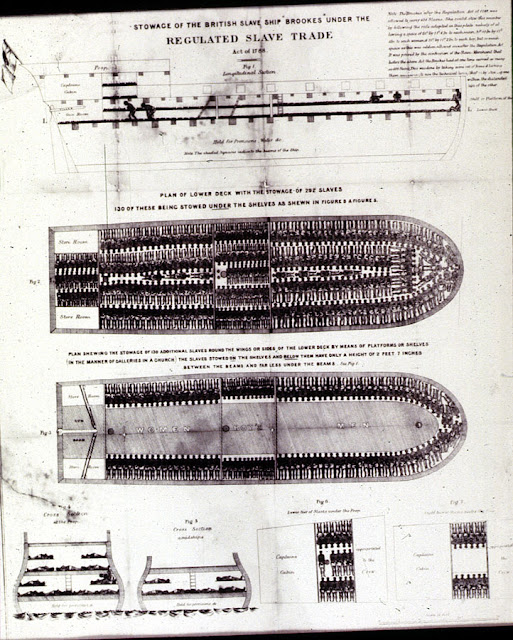 The most dreadful aspect of the diagram is the reference to Britain’s Regulated Slave Trade Act of 1788, which was considered to be a responsible measure for reducing deaths through overcrowding.  The packing shown was legally approved, as it was in full conformance with this Act which allowed each man a rectangular space 6 feet long (72 inches) and 16 inches wide. A slightly smaller allowance was made for women and children.292 slaves were packed on the lower deck, of whom 130 were placed below the shelving above. The latters’ headroom was also restricted, being noted as 31 inches between the transverse beams overhead, but less directly beneath them. Men were placed in the forward part of the ship and women and children aft. The mind recoils from imaging the conditions these people endured for weeks in terror, without sanitation , adequate food, water or exercise as these ships crossed sweltering tropical seas and as the dead – and sometimes the sick – were tossed overboard.

The horror of such transport reached its peak in bad weather. This was driven home to me by an article in an American book, publication date unknown, author unspecified, and entitled “Thrilling Narratives of Mutiny, Murder and Piracy” which I discovered on Project Gutenberg while searching for something else. The article quotes from “a letter from Philadelphia, dated November 11th, 1762.”  Though no further detail was provided it appears to have been written by somebody – perhaps the captain – of a slave ship, the Phoenix, which was en-route to Chesapeake Bay from the African coast with 332 slaves on board.

Towards sundown on Wednesday 20th of October 1762, when still some 220 miles ESE of its destination, the Phoenix encountered a severe gale from the south, accompanied by high seas, thunder and lightning. She sprung a leak which the pumps proved incapable of keeping pace with and attempts to put the ship before the wind failed. By midnight ballast-sand had blocked the pumps and  “there being seven feet water in the hold, all the casks afloat, and the ballast shifted to leeward, (we) cut away the rigging of the main and mizzen masts, both of which went instantly close by the deck, and immediately after the foremast was carried away about twenty feet above.”  The guns were thrown overboard to lighten the ship and “we were then under a necessity of letting all our slaves out of irons, to assist in pumping and baling.”

The Phoenix survived the night and the weather moderated somewhat. The pumps appeared to have been cleared – temporarily at least – and the water level in the hold had been lowered by three feet. Nevertheless “we found every cask in the hold stove to pieces, so that we only saved a barrel of flour, 10 lbs. of bread, twenty-five gallons of wine, beer, and shrub, and twenty-five gallons of spirits. The seamen and slaves were employed all this day in pumping and baling; the pumps were frequently choked, and brought up great quantities of sand. We were obliged to hoist one of the pumps up, and put it down the quarter deck hatchway. A ship this day bore down upon us, and, though very near, and we making every signal of distress, she would not speak to us.”

By the next day, Friday 22nd October, the male slaves were “very sullen and unruly, having had no sustenance of any kind for forty-eight hours, except a dram, we put one half of the strongest of them in irons.” On Saturday and Sunday, “all hands night and day could scarce keep the ship clear, and were constantly under arms.”

By Monday morning the slaves were in revolt – “many  had got out of irons, and were attempting to break up the gratings; and the seamen not daring to go down in the hold to clear the pumps, we were obliged, for the preservation of our own lives, to kill fifty of the ringleaders and stoutest of them.”

There is no elaboration of this bald statement, no indication of whether these helpless people were shot or killed with edged weapons. The writer does however go on to say that “It is impossible to describe the misery the poor slaves underwent, having had no fresh water for five days. Their dismal cries and shrieks, and most frightful looks, added a great deal to our misfortunes; four of them were found dead, and one drowned herself in the hold.” By that evening the water level was still rising “and three seamen dropped down with fatigue and thirst, which could not be quenched, though wine, rum, and shrub were given them alternately.”
There is no elaboration of just what conditions were like in the next three days – they can only have been horrific as the dismasted and sinking ship drifted helplessly. Bby Thursday morning the battle against the rising water was clearly lost. “The seamen (were) quite worn out, and many of them in despair.”

Now comes the letter reaches is appalling conclusion, that needs to be quoted in full: “About ten in the forenoon we saw a sail; about two she discovered us, and bore down; at five spoke to us, being the King George, of Londonderry, James Mackay, master; he immediately promised to take us on board, and hoisted out his yawl, it then blowing very fresh. The gale increasing, prevented him from saving anything but the white people’s lives, not even any of our clothes, or one slave, the boat being scarcely able to live in the sea the last trip she made. Capt. Mackay and some gentlemen, passengers he had on board, treated us with kindness and humanity.”

No further details are given but the words “or one slave” stand as a unanswerable indictment of this unspeakable trade.


If there is a Hell, then there must be a hot corner reserved for those who financed such voyages and profited from them.
Posted by Antoine Vanner at 13:35