In the later 19th and early 20th Centuries the “K.u.K” – “Royal and Imperial” – Navy was probably the most efficient and well-equipped part of the Austro-Hungarian armed services. Operating out of bases on the Adriatic coast of what would later become Yugoslavia, and well provided with excellent ships, armed with the highly-regarded products of the Skoda arsenals in Bohemia, this navy was to represent a potent threat “in being” during World War 1 which tied up large Allied naval resources to contain it. The K.u.K Navy’s day of greatest glory was however a half-century earlier, when Austria-Hungary’s most famous admiral, Wilhelm von Tegetthoff (1827 –1871) led his fleet to and overwhelming victory over the Italians at Lissa in 1866.  A daring and inspirational commander who was to die tragically young, Tegetthoff established a reputation in Austro-Hungarian popular consciousness which was comparable to that of Nelson in Britain. His success at Lissa was however preceded by a narrow tactical defeat two years earlier, not in the K.u.K Navy’s normal operational area of the Adriatic and Mediterranean, but in the distant waters of the North Sea.

The Danish War of 1864 was to be the first of three conflicts deliberately instigated by Prussia’s chancellor, Otto von Bismarck, in the 1864 -1870 period to establish primacy of Prussia over the other separate German Kingdoms and to unite them as a single empire under Prussian leadership. The ostensible reason for the war with Denmark was resolution of “The Schleswig-Holstein Question”, the control of two linguistically-German duchies lying directly south of modern Denmark and at that period under Danish control. The political, dynastic and diplomatic complexities of this “Question”  were so impenetrable that the British Prime Minister, Lord Palmerston, was to quip that  “Only three people have ever really understood the Schleswig-Holstein business—the Prince Consort, who is dead—a German professor, who has gone mad—and I, who have forgotten all about it."
Though it was to put up a valiant defence, the small Kingdom of Denmark was to find itself heavily outnumbered and outgunned by the combined land forces of Prussia and Austria-Hungary. The latter had allowed itself to be drawn into the conflict – stupidly as it was to find out two years later, when Prussia was to attacker it in turn. It was only at sea that the Danes were to have a degree of superiority since it had a well-equipped and competent navy, whereas Prussia still had negligible naval forces – little more than a gunboat flotilla – and the more formidable Austro-Hungarian Navy was operating far from its home bases. The Danes were to use their resources effectively in support of land operations as well as imposing a blockade on Prussian ports. 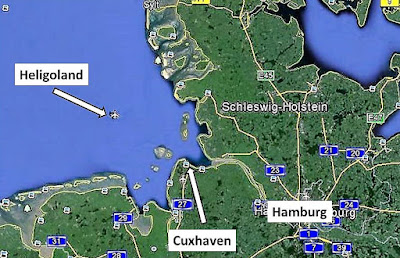 The most significant encounter of the short-duration (effectively February – May 1864) war was to occur close to its end, when significant naval forces clashed close to the then British-controlled island of Heligoland.
On May 9th a squadron of three powerful Danish vessels under the command of Admiral Edouard Suenson – the 42/44-gun screw frigates, Niels Juel and Jylland, supported by the 16-gun screw corvette Hejmdal – approaching from the north, sighted the neutral British frigate HMS Aurora on station off the island.  Beyond her however, to the south-west, five other vessels came into view. These were the powerful Austro-Hungarian screw frigates Schwarzenberg (51 guns) and Radetzky (37-guns), accompanied by three insignificant Prussian gunboats mounting three or for guns each. This squadron was under Tegetthoff’s overall command.
Both forces advanced to engage and at 13.15 hours the action commenced when Tegetthoff’s flagship, the Schwarzenberg opened fire. This was returned by the Danes only when the range had shortened to a mile. An attempt by Tegetthoff to execute the classic “crossing the T” manoeuvre failed. Had it been successful it would have allowed his two vessels to concentrate their combined broadsides on the Danish lead ship. Instead, a Danish turn allowed the squadrons to pass each other in line. By this stage the three Prussian gunboats had fallen behind and Tegetthoff turned to prevent them being cut off by the Danes. This brought the opposing squadrons running south-westwards in two parallel lines.  The Niels Juel concentrated her fire on the Schwarzenberg, while Jylland and Hejmdal directed theirs on the Radetzky.
The action lasted for some two hours and culminated in the Schwarzenberg sustaining such serious damage that she took fire. With her loss a definite possibility, Tegetthoff decided to make for the neutral zone around Heligoland. The pursuit by the Danes had to be abandoned as the British Aurora, which had observed the action, was standing by to enforce neutrality if so needed. There was no option but to remain outside the three-mile limit while Tegetthoff managed to get the fire on the flagship under control. In the course of the following night he managed to evade the Danish squadron and bring his ships to the nearby Prussian-controlled port of Cuxhaven.
The action was generally judged to be – narrowly – a Danish tactical victory. The butcher’s bill had been small – 17 Danes killed and 37 wounded as compared with 37 dead and 93 wounded on the Austro-Hungarian ships – though the losses would have been bitter indeed for the families of the men involved. Victory or defeat was irrelevant however. Three days later, on May 12th, an armistice was implemented which brought the fighting by land and by sea to an end. By the subsequent settlement Denmark lost control of the two duchies in contention and they were in due course incorporated into what became the German Empire. They have remained German ever since.
Denmark may have lost the war, but her resistance had been heroic and considerable national pride is still taken in it, justifiably so. The 2400-ton Jylland, one of the largest wooden warships ever built, and which had sustained major damage in the battle, has been preserved as a national monument. She is today on display in a dry dock at Ebeltoft.

This engagement off Heligoland was to prove the last major action before iron and steel replaced wood as the main construction material for ships. When Tegetthoff was to go into action again two years later – this time during a war which would pit Austria-Hungary against its former ally Prussia – it was to be in a battle dominated by ironclads. On that occasion there would be no doubt as to who had gained victory, whether it tactical or strategic or both.

But that’s another story, and will be the subject of a future blog.

AuthorAntoine Vanner talks about his latest novel, Britannia’s Spartan, in a shortvideo. Click here to watch it.