In the late 19th and early 20th Century the French and German navies became fixated on the idea of “Cruiser Warfare” – the individual ships operating far from home on the world’s oceans and striking at enemy seaborne trade. Britain, with enormous merchant fleet and the dependence of its economy on overseas trade, was seen as particularly vulnerable. Belief in the concept rested on the success of such operations in the Revolutionary and Napoleonic Wars by both privateers and national navies. As late as the American Civil War, in the 1860s, the Confederate riders Alabama and Florida were to hurt disrupt Union trade far from home waters and necessitate diversion of significant resources to hunt them down. In the 1890s so called “protected cruisers”, which would later evolve into the light-cruiser classification, were seen as especially suited to such tasks. 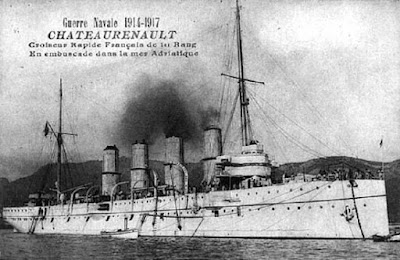 The French navy went so far as to build one such cruiser, the Châteaurenault, which was designed to look from a distance like an ocean liner, and so increase its chances of closing with an unsuspecting victim. Several classes of German cruisers of the immediate pre-WW1 period were especially suited to such operations. It was also intended that in time of war civilian vessels would also be commandeered and armed. Unarmoured they might be, but they were intended to capture defenceless merchant shipping and not battle it out with a naval opponent. The Royal Navy, no less than those of other nations, had made provisions for such conversions and subsidies were often provided to shipping companies to build strengthened positions into decks on to which guns could be mounted in wartime. (The RMS Lusitania was one such vessel, though she was not armed at the time of her loss).

The weakness of the cruiser warfare concept was that the conditions that had favoured success in the Napoleonic era no longer applied.  Sailing ships could operate far from base for many months – food and fresh water being the only consumables – but steam vessels were heavily dependent on shore support, not only for fuel supply but for maintenance of boiler and machinery. Britain was well supplied with widely-spread fortified naval bases when war broke out in 1914 but Germany had only a single such base, Tsingtao, on the Chinese coast. German colonial harbours elsewhere were unfortified and were thus easily occupied in the early months of the war. Tsingtao, despite heavy investments in strong fortifications, was to fall to a combined Japanese –British force before the end of 1914. The upshot was that German vessels on overseas deployments could not rely on fuelling and maintenance facilities other than those in Germany itself. Some reliance had been placed on chartered colliers supplying coal from neutral ports and rendezvousing with warships at sea but in the event this source proved of little utility. (Click here to read blog on “Germany’s Naval Nomads”) In practice German raiders were dependent on coal captured from prizes. In practice, transfer of coal from one ship to another on the open sea was a brutally difficult task in all but the calmest weather.

It is against this background that the relative success of the German raider SMS Prinz Eitel Friedrich should be seen. A 16,000-ton, 503-foot liner, launched in 1904 was in service for the Norddeutscher Lloyd Company between Germany and China. Designed for long ocean passages, she was capable of a maximum 15 knots. Her peacetime crew was of the order of 400, reflecting the heavy labour demands of a large coal-fired steamship. She was at Shanghai when war broke out in August 1914 and she proceeded immediately to Tsingtao to be fitted out as a raider and to support Admiral von Spee’s East Asia Squadron (Click here for an earlier blog on this squadron’s victory in the Battle of Coronel). The Eitel Friedrich was fitted with four 4-inch (10.5 cm) guns and several smaller weapons from the obsolescent gunboats Luchs and Tiger. She now commissioned as a warship of the Imperial German Navy as SMS Prinz Eitel Friedrich, under the command of Korvettenkapitän Max Therichens, previously of the Luchs. She slipped out of Tsingtao before the Japanese-British blockade of the base became effective and she sailed to join von Spee’s squadron at Pagan, in the Northern Marianas island group, a German colony since 1899, arriving there on 12th August 1914, some two weeks after outbreak of war. Too slow to join von Spee’s cruiser squadron, the Eitel Friedrich was detached for independent action against the merchant shipping of Britain and her allies, initially off Australia.

The Eitel Friedrich was to operate in the Pacific for the next three months, hunted, as von Spee’s squadron was separately by Japanese as well as British forces. Britain’s formal alliance with Japan – which was to last until 1923 – was paying off and fulfilling its intended role of releasing British ships from the Pacific area for employment closer to home. No success was scored by the Eitel Friedrich until early December but her second capture was invaluable, a French sailing collier carrying 3500 tons of coal. As this vessel carried no radio it was possible to tow her to the tiny Chilean possession of Easter Island which was not connected to the mainland by either telegraph or radio. The Eitel Friedrich’s presence thus unknown and here the coal could be transferred in sheltered waters and sheep were also taken on board for meat. The collier – the first of eight sailing vessels the Eitel Friedrich would capture – was scuttled after the transfer. The collier’s crew were put ashore though those of subsequent captures were taken on board, accommodation being ample.

By this time the Eitel Friedrich was with one exception – the light cruiser SMS Dresden – the only survivor of van Spee’s squadron, the others having been hunted down and sunk. Her engines and boilers were already showing signs of wear and top speed had fallen, and was likely to fall still further. With no friendly base available there was no option but to head for Germany, inflicting maximum damage on enemy shipping on the way. Accordingly, in January 1915, with enough coal and mutton to last until early April, Captain Therichens brought his ship over into the South Atlantic. Conscious of the risk of British ships patrolling the Cape Horn area, he steered a course far to the south, along the northern fringes of Antarctica.

Over the next month the Eitel Friedrich was to sink a further eight ships off the South American coast. Aware that he was incapable of outrunning any enemy, Therichens stayed away from the main trade routes and detection of his presence was made all the more difficult by most smaller merchant ships of the period not carrying radio.  His tonnage score was steadily increasing – reaching before operations ended a total of eleven ships of 33,000 Gross Registered Tons.  One of these victims was to prove especially significant, the large (3,374-ton) American sailing vessel William P Frye, detained on 27th January. It should be noted that the United States was still neutral at this stage of the war. The Frye was carrying wheat to Britain and, despite her American registration, Therichens ordered the entire cargo to be thrown overboard before she would be allowed to proceed. This process went slowly – and dangerously, for too-long a stay in any one area increased the risk of interception –  so on the following day Therichens ordered the American crew to be taken on board the Eitel Friedrich and the ship herself to be destroyed by gunfire. This was the first case of a neutral American ship being sunk by the German Navy – actions that were ultimately draw the United States into war with Germany.

Four further ships – two steamers and two sailing vessels – were captured and destroyed in February but during the following month it was obvious that with supplies running low, engines suffering breakdowns, hull badly fouled and awareness that British patrolling has intensified, the chance of reaching Germany was all but zero. There was nothing for it but to head for a neutral port – in this case Newport News in Virginia, arriving there on 12th January. Therichens seemed to have entertained hopes of being allowed to carry out major repairs, and the American authorities – bizarrely, one must think – allowed the captured crews, now amounting to some 300 men, to be kept on board. Therichens argued, with some success, to be allowed to stay in Newport News for several weeks to effect repairs, but the sinking of the William P Frye had eroded sympathy and the case was in the process of growing into a major diplomatic issue. It was obvious at last however that escape would be impossible, since a British armoured cruiser, HMS Cumberland and a Canadian cruiser HMSCS Niobe, were waiting just outside territorial waters. (The similarity with the plight of the Graf Spee at Montevideo in 1939, when a later HMS Cumberland was also waiting outside, is very marked). Accepting defeat, Therichens surrendered his ship and his crew for internment in America.

The Eitel Friedrich was to remain idle for the next two years but when the United States entered the war she was taken over for use as a troopship and renamed USS DeKalb.  She was to see intense service carrying troops across the Atlantic to Europe and equally intense service carrying them back in 1919. Thereafter she was to be sold to the United American Lines Company and operated on transatlantic service under the name SS Mount Clay.  She was laid up in 1926 and scrapped nine years later.

It was a mundane end for a raider that had evaded capture with skill and determination  for seven months and had inflicted significant loss on enemy shipping at little cost.

Click below for more details for both paperback and Kindle versions: