The Captains’ War: Bulgaria and Serbia 1885

There is something intensely sad when reading about forgotten conflicts, often fought over issues that were trivial even at the time, and which were memorable only to the families whose happiness was wrecked by loss of loved ones.  War may be “Last Argument of Kings” – as was inscribed on his cannons by Louis XIV – but the true price is paid by much humbler people. One such forgotten conflict was that between the Balkan nations of Serbia and Bulgaria in 1885. Military operations lasted only two weeks but they resulted in a decisive victory for one of the parties.

Bulgaria as a nation had only been born seven years previously, following its liberation from Ottoman-Turkish (mis)rule in the brutal Russo-Turkish War of 1877-78. This had been triggered by Turkish massacres of Christian Bulgarians in 1876 in what was still then a Turkish province. Russia, traditionally the protector of Eastern Christians, used this as a pretext for a declaration of war on Turkey, with the ultimate objective of capturing Istanbul (Constantinople) and  thereby securing an outlet on the Mediterranean. The war was to be bloody in the extreme – other than the Franco-Prussian War of 1870-71 the largest in Europe between Waterloo and World War 1. It was characterised by excess on both sides and further massacres. The Russian Armies smashed their way to the very outskirts of Istanbul and had Britain not threatened to intervene on Turkey’s behalf would have done so.  (This war provides the background to my novel Britannia’s Wolf, in which the action plays out in the last, brutal months of fighting - see link at end of article). 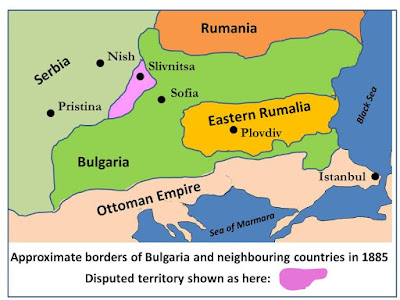 The final outcome was decided at the Congress of Berlin in 1878 when the major European powers agreed revised borders. This involved creation of Bulgaria as an independent principality, but with a large enclave within it, known as Eastern Rumelia, which remained under nominal Ottoman control. The challenge was now to find a ruler for the new principality and the solution usually adopted in such cases in the nineteenth century was resorted to. This was to find some under-employed member of a minor royal or semi-royal house, usually German.

In this case the lucky man was to be Prince Alexander of Battenberg (1857 – 1893), then serving as a lieutenant in the Prussian Life-Guards in Berlin. Why this was considered a suitable qualification for a head-of-state role, even for a constitutional monarchy, as Bulgaria was to be, is somewhat of a mystery. In the event however Alexander was not to do badly.  His older brother, Prince Louis (1854-1921, was already serving in Britain’s Royal Navy and in due course would rise the office of First Sea Lord. Despite a distinguished career and unquestioned loyalty to Britain, this unfortunate man was hounded from office in 1914 because of this German name, which he thereafter changed from Battenberg to Montbatten. Lord Louis Montbatten (1900-1979), uncle of the present Duke of Edinburgh, and last Viceroy of India, was his son.

Alexander, now a constitutional monarch was Prince of Bulgaria, was to find himself caught between the machinations of the Russians, who wanted him as a puppet, on the one hand and of Bulgarian politicians on the other. Frustrated, he lost patience on 1881 and, with the connivance of Russia, suspended the constitution and assumed absolute power.   For the next two years the real power was in the hands of two Russian generals, Sobolev and Kaulbars, sent by the Czar, much to the anger of many Bulgarians. In 1883 Alexander restored the constitution – with broad support from the Bulgarian political classes –an action that enraged the Czar and led to the withdrawal of senior Russians who had been training the Bulgarian army.

Throughout this period Eastern Rumelia had remained under nominal Turkish control but a revolution there in 1885 gave Alexander the opportunity to annex it and create a single Bulgarian state. This step was popular throughout Bulgaria but the possibility existed that Turkey would strike back. Bulgarian forces were accordingly sent south-east to defend the border against any Turkish offensive.

Serbia, Bulgaria’s western neighbour, saw this situation as an opportunity for an easy seizure of a small area of disputed territory on the border between the two countries (see map). In November 1885 Serbian forces, 60,000 strong, crossed the frontier under the command of King Milan I (1854-1901). Eager for personal glory, and confident of an easy victory, he did not appoint experienced generals to key positions. Though well-armed with modern Mauser rifles the Serbian troops were poorly trained in their use. Recently-ordered modern artillery had not yet arrived. Morale seems to have been poor, not least because the troops seem to have been told initially that they going to the aid of the Bulgarians in a war against Turkey. That they were now to fight the Bulgarians instead caused considerable confusion and lack of trust.

Given that Bulgarian forces were massed to the south-east, to face a Turkish threat, the Serbian advance in the north-west should have proved  a walkover. In the event however Alexander and the Bulgarian high-command took the risk of assuming that the Turks would not attack – an assumption that proved correct – and worked somewhat of a miracle in shifting the bulk of their forces to meet the Serbians.  Doing so was dependent on a limited-capacity railroad as well as very impressive feats of marching. One infantry regiment marched some 60 miles in 32 hours, and indication of the high level of Bulgarian morale. The Bulgarian weakness was in senior officers since the Russians occupying these positions had been withdrawn and the burden of command fell on middle-ranking Bulgarians (causing the conflict to be known afterwards in Bulgaria as "The War of the Captains"). Armed with poorer rifles than the Serbians, the Bulgarians did however have the advantage of modern breech-loading artillery.

The weak screen of Bulgarian forces in the mountainous terrain on the border succeeded in delaying  the Serbian advance while reinforcements arrived from the south-east. These occupied previously prepared defensive position at Slivnitsa, where the decisive battle was to take place. Some two and a half miles of trenches and artillery redoubts ran along a ridge in front of Slivnitsa village and the flanks were protected by steep mountainous terrain on the right and hilly country to the left. Experience in the later stages of the American Civil War and in the Russo-Turkish Was had shown that frontal assaults on entrenched positions were unlikely to succeed, and in the years since both these conflicts significant improvement had been made as regards range, effect and accuracy of both small-arms and artillery.

By November 16th Prince Alexander – personally commanding the Bulgarian forces – had some 25,000 troops in place, with 15,000 more arriving over the next two days. The Serbian attack commenced on November 17th and continued through the 18th and 19th. An attack on the Bulgarian centre was – not surprisingly – thrown back, artillery fire proving especially effective, while an attempted Serbian flanking attack on the Bulgarian left on the 19th proved equally abortive. The Serbians were now forced to retreat, followed over the frontier by the victorious Bulgarians.  An attempt by the Serbians to dig in to resist the Bulgarian onslaught failed under a determined flank attack. By November 27th the Serbs were back at Nish and at this point the Austro-Hungarian Empire demanded that the Bulgarians accept a cease-fire or face reinforcement of the Serbs by Austro-Hungarian troops. This was accepted, although peace negotiations were to last until March of the following year.

The 1886 Treaty of Bucharest that ended the war was to result in no adjustments to the Serbo-Bulgarian border. The butcher’s bill for achieving this return to the status quo ante involved each side suffering  700-800 dead  and some 4500 wounded. Bulgaria was justifiably proud of its military victory but a residue of bitterness was to remain between both countries which was to have dreadful consequences three decades later in World War 1.  Outside both countries the only popular memory of the conflict – and a fading one today at that – was George Bernard Shaw’s cynical comedy “Arms and the Man.” Set in the war’s immediate aftermath, this was, quite bizarrely, made into an operetta  entitled “The Chocolate Soldier” (Der Praliné-Soldat) by Oskar Strauss in 1908.

In the circumstances Prince Alexander had acquitted himself admirably.  He was not however to enjoy his enhanced reputation for long. Many Bulgarian officers considered themselves inadequately rewarded for their part in the victory and in August 1896, a mere nine months after his victory, he was forced to abdicate, possibly at gun-point. An attempt at a come-back failed and he finally left Bulgaria the following month. He was to live only seven years more, mainly in Austria, where he held a military command. The reduction in status and dignity must have been hard to endure and one cannot but feel that he deserved better. He died in 1893.

And the Bulgarian monarchy? Yet another member of a minor German princely house was found to fill the vacancy. But that’s a separate story!

The first book in the Dawlish Chronicles Series

1877: Russian forces drive deep into the corrupt Ottoman-Turkish Empire.  In the depths of a savage winter, as the Turks face defeat on all fronts, a British officer is enmeshed and finds himself confronting enemy ironclads, Cossack lances and merciless Kurdish irregulars. And in the midst of this chaos, while he himself is a pawn in the rivalry of the Sultan’s half-brothers for control of the collapsing empire, he is unwillingly and unexpectedly drawn to a woman whom he believes he should not love.

Britannia’s Wolf is available in hard-copy and Kindle format – click here for details.

Britannia's Wolf It is also available as an audio book read by the distinguished American actor David Doersch. If you haven't previously ordered an audio-book from audible.com you can download it without cost as part of a 30-Day Free Trial. You can listen on your Smart Phone, Tablet or MP3 Player.


Click here for audio details (US and elsewhere)
Posted by Antoine Vanner at 14:54