I first read "Father and Son" by Edmund Gosse (1849-1928) well over 40 years ago and I've re-read it several times since, as well as delighting in a talking-book version. It's Gosse's memoir of a bizarre Victorian childhood and it's simultaneously humorous, tragic, generous and honest. The narrative centres on Gosse's relationship with his marine-biologist father, whose fundamentalist Christian beliefs were thrown into turmoil by the publication of Darwin's "Origin of Species". To describe this man as "difficult" would be an understatement and yet the mutual love between him and his son shines through every page, including those that involve the most farcical events (the incident of the Christmas Pudding takes beating!). Gosse's account of his mother's illness and death is heartrending but it is pleasing to read of his relationship with his father's second wife, a thoroughly good woman.

As an adult, and after a painful break with this father on spiritual matters, Gosse went on to be a poet, author and critic. He was responsible for bringing Ibsen to the attention of the British public - indeed he translated Ibsen's Hedda Gabler and The Master Builder. He knew just about every notable literary figure between 1870 and 1928 and the list of his own achievements is daunting. 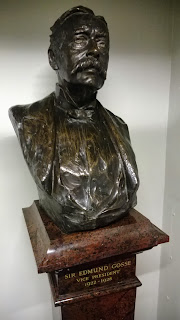 I've always liked Gosse - he seems to have been the sort of man one would have enjoyed knowing. He was also involved with the London Library, in St.James's Square, which is from were I draw much of my research material. Founded in 1841,this is the largest (and possibly best) subscription library in the world and has been a vital resource for thousands of writers and scholars. The bound copies of the Illustrated London News - another great Victorian institution - are located in the basement and I consult them regularly. On the way I pass a bronze bust of Gosse that has, shamefully, been placed there rather than in the entrance hall.  On occasion some irreverent soul has lent him a baseball cap which, strangely, rather suits him. I always doff my own cap metaphorically to him as I hurry past but a few days ago I paused to snap a photograph of him on my Smartphone. Here it is - my own small tribute.

Thank you Sir Edmund. You were a good man.
Posted by Antoine Vanner at 04:04