In 1851 the English historian and jurist Sir Edward Shepherd Creasy published his “Fifteen Decisive Battles of the World”. A different outcome of each of these battles would have resulted in a significantly different course of world history, and as such they still influence the world we live in today. As such they represent major “points of departure” for alternative histories.

Pultowa 1709: Russia's First Step to Superpower Status
It is notable that due to Creasy’s focus on European (and North American) power, and because little was then known in the West about Far Eastern history, no battles were listed which refer to China’s consolidation and survival as an imperial power, the failed Mongol invasions of Japan or to Japan’s failed bid for conquest of Korea in the 15th and 16th centuries and the implications that had for subsequent Japanese history. The Mameluk victory in 1260, over the Mongols at Ain Jalut, in Galilee, which was critical in stemming Mongol power, was also omitted. Taking these and other Asian battles into account Creasy’s list might rightly have been extended to 20 or even 25 at the time he wrote. There is also good reason that he should have included the 1836 Battle of San Jacinto, which led in due course to United States acquisition of a vast areal percentage, and an economically vital one, of the modern nation.

Since that time various writers have added to the list of post-1851 battles. Given the increasing pace and scale of conflicts since then it is not inappropriate to add at least 10. As a starting point for discussion and speculation, and with all due lack of modesty I’m suggesting the 10 post-1851 decisive battles as below:

1)       Gettysburg (and Vicksburg) 1863: though fought in separate theatres, but at almost exactly the same time, these battles made the defeat of the Southern Confederacy inevitable, not least by ending hopes of international recognition. A long attritional grind lay ahead but Union victory was now inevitable.

2)       Sedan1870: Not only did Bismarck’s Germany crush France decisively, and usher in the new German Empire, but it was absolute enough to ensure that the French would ultimately settle for a peace that ceded Alsace and Lorraine, thereby planting the seeds for WW1.

3)       Manila (and Santiago) 1898: Two naval victories half a world apart that announced the arrival of the United States and established a position in Asia that would be critical in WW2.

4)       Tsu Shima 1905: Japan’s victory over the huge Russian fleet was perhaps the most absolute in naval history. It marked the arrival of Japan as a major power and encouraged ambitions that would ultimately lead to WW2 in the Far East and the Pacific.

5)       The Marne 1914: Decisive in the sense that Germany could not achieve the quick victory in the west that it had built its strategy on. From this moment on Germany was on the back foot in the West. The Western Allies bought time that would ultimately lead to their defeat of Germany.

6)       Warsaw 1920: Bolshevik victory in the Russian Civil War was almost absolute when the Red Army was launched westwards to carry revolution into Central Europe. The new Polish state worked a miracle in defeating it. It saved Europe but at the cost of stoking Russian resentment that would exact a terrible revenge in later decades.

7)       The Atlantic 1939-45: Though the struggle to secure Britain’s supply lines climaxed in 1943, the fight went on from the first to the last day of WW2. Churchill described the U-Boat menace as the thing that frightened him most – and with good reason. Without victory in the Atlantic, no Allied victory in Western Europe.

9)       Saipan 1944: I’ve identified the conquest of Saipan rather than Midway as being the decisive battle in the Pacific in WW2. My reasoning is that though Midway was critical in weakening the Japanese Navy, the United States would still have prevailed, though over a much longer time scale, if it had lost the battle. National determination and industrial muscle would have prevailed. Saipan was critical in identifying the type of war that had to be fought to beat Japan, leading in due course to the decision to drop nuclear weapons, At Saipan not only did the Japanese military fight to the death, but huge numbers of civilians, including women who killed their own children, were prepared not only to resist but to commit suicide rather than surrender. This was the first US encounter with a Japanese civilian population and it highlighted just how costly an invasion of the Japanese Home Islands would be. From this point on I believe that use of nuclear weapons was unavoidable.

10)   The Battle That Never Was 1983-90: The US commitment to the Strategic Defense Initiative (SDI – “Star Wars”), whether it was ever technically feasible or not at the time, was believed to be feasible by the Soviets.  Their military budgets were already an unsustainable percentage of their total economy and the pressure to compete with Star Wars was possibly the greatest single factor in bringing about the ultimate collapse of the Soviet Union. Not a shot was fired and the tyranny hundreds of millions had lived under for seven decades died not with a bang but a whimper.

The list above is obviously subjective and I’d be welcome to hear comments.

Tsu Shima 1905: The end of the Russian Flagship Knyaz Suvorov 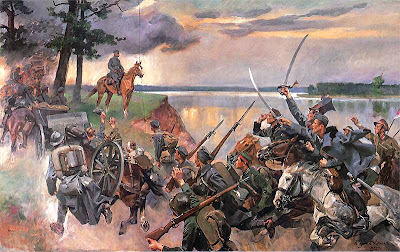