So much in one life! Sir George Nares – Sailor, Explorer and Oceanographer

My blog last week introduced us to Sir George Nares, a Royal Navy officer who first came to public attention for the trick he played to gain the honour for Britain of sailing the first ship through the Suez Canal. Were we to have judged Nares by this one exploit alone we would have expected him to have been an insolent, devil-may-care rover, much in the Cochrane and Jack Aubrey transition. The opposite was indeed the case for Nares was to prove himself one of the most systematic, meticulous and scientifically-oriented officers of his generation. Though of a later period, one suspects that Doctor Stephen Maturin would have found him a very congenial shipmate!

Of Welsh origin, Nares was born into a naval family in 1831, and he himself entered the navy at the age of fourteen.  He gained his first taste of Arctic exploration in 1852 when he sailed on HMS Resolute on one of the unsuccessful attempts to search for the remnants of the Franklin expedition among the islands north of Canada. Resolute had originally been a civilian ship, purchased for her stout construction and fitted with an internal heating system. Frozen into the ice during the winter of 1852/53, the spring thaw failed to release her and the decision was taken to abandon her. Resolute was left in an unmanned state that would allow further wintering – only the lowest sections of the masts left standing, the rudder shipped and all hatches caulked shut. The crew then had to make a hard trek across the ice to reach other expedition ships, which had broken free.  The Resolute was indeed to survive. An American whaler found her, in excellent condition, drifting 1500 miles from her point of abandonment. The American government purchased her from her salvers and presented her back to Britain as an inspired act of "national courtesy".
The outbreak of the Crimean War in 1854 put an end to Arctic expeditions and Nares found himself serving initially on the line-of-battle ship HMS Conqueror, and later on HMS Glatton.  This was an innovative craft, an armoured floating battery, one of five built by the British and French navies for bombardment of Russian coastal fortifications, but completed too late to see active service.  The years that followed saw Nares establishing himself as a gunnery and survey expert and he published a textbook for training of cadets. 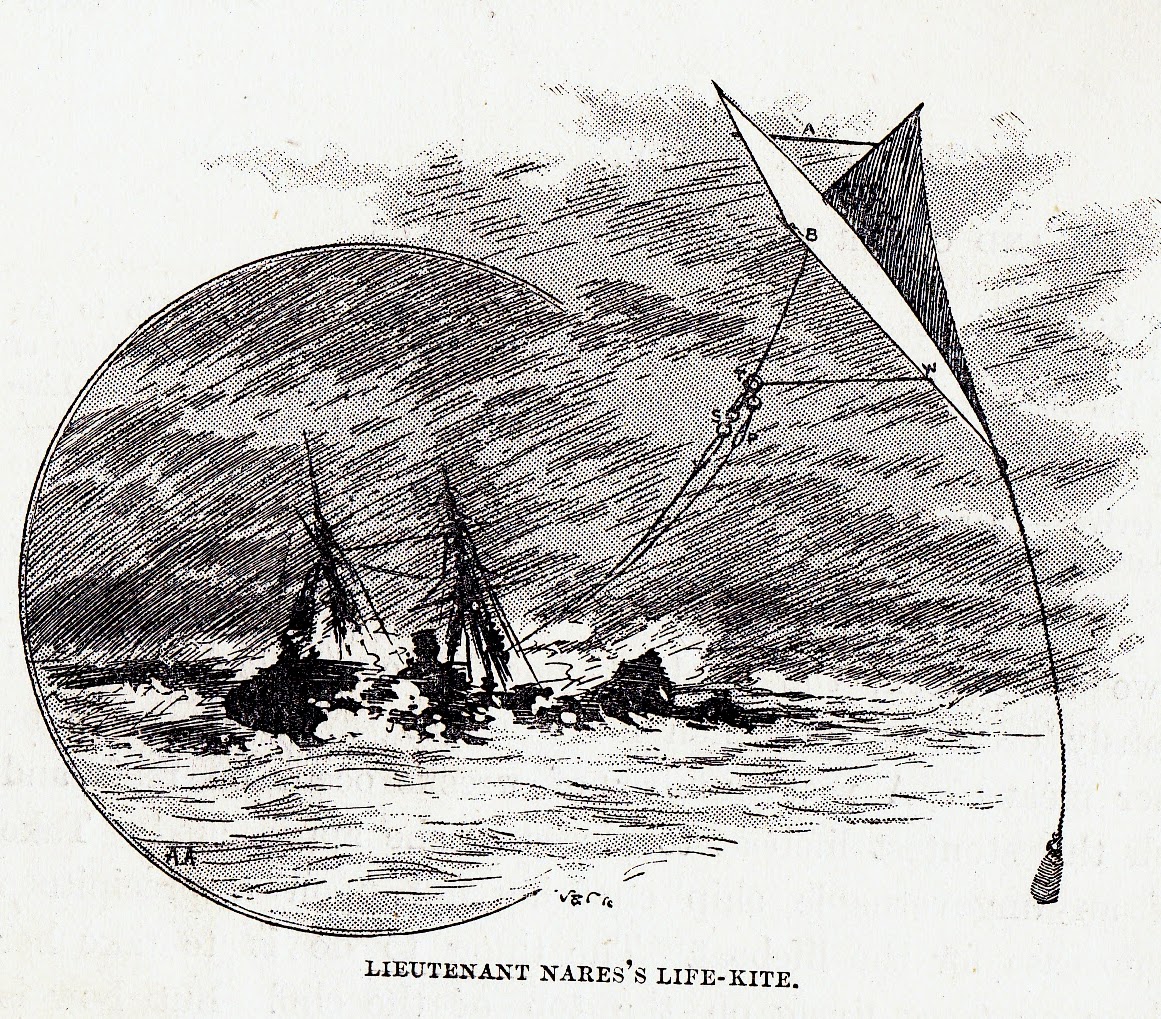 It is in this period that he invented the “Nares Life Kite” which would allow a wreck to land a line on a lee shore.  This large kite had a limited degree of manoeuvrability and its weight-carrying capacity could be adjusted by varying the angle included between the two side panels. The Victorian-era book in which the above illustration was found explains: “Suppose your wreck to be on a beach. You get the kite steady in the air with about 100 yards of the line out. You then take another line – about twenty yards will probably suffice – tie one end to the kite line and the other to a life-buoy. Let a man get into the life-buoy. Then veer away and the kite will pull the man shore through the surf… suppose, on the other hand, that you are near a cliff, with people standing on it, but unable to send help: you have to bend a long lead-line to the kite line; and when the people get old of this lead-line they can use it to pull a stronger rope ashore”. No information was however provided as to whether this kite was ever actually used – one suspects that dragging a man through the surf was easier in theory than in practice.  It is not known whether Nares ever tested the manoeuvre!
After 1865.now in command of his own ship, the paddle-sloop HMS Salamander, Nares did extensive survey work off Australia, including the Great Barrier Reef. This led in turn to command of another survey ship, HMS Newport, for work in the Mediterranean. It was in her that he was to perform is exploit at the Suez Canal opening ceremonies, as told in last week’s blog. 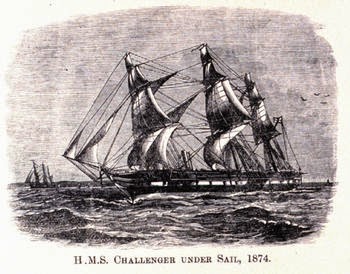 Though officially reprimanded for his embarrassment of the French Empress – and nation – in Egypt, Nares was congratulated in private thereafter and promoted to captain. He now landed one of the most prestigious assignments in the Navy – command of HMS Challenger on the scientific expedition of the same name. Setting out in late 1872, this undertaking was more ambitious by far than the voyage of the Beagle some four decades earlier. This inspired project  was funded by the British government to the level of £200,000 (worth at least fifty times as much today) and in view of what was achieved – essentially the creation  of the science of Oceanography – represented extraordinarily good value. There had been extensive surveys made globally of coasts and inshore waters but very little was known about the ocean floors.  It was a joint operation by the Royal Navy and the Royal Society, then the world’s premier scientific organisation, the Navy providing the ship and crew, the Royal Society the scientific team.

The Challenger was a Pearl-class corvette, launched in 1858 and of 2137 tons and 225 foot length, equipped both with sail and a 400 hp auxiliary engine.  All but two of her guns were removed and laboratories, extra cabins and a special dredging platform installed. She was loaded with specimen jars, alcohol for preservation of samples, microscopes and chemical apparatus, trawls and dredges, thermometers and water sampling bottles, sounding leads and devices to collect sediment from the sea bed and great lengths of rope (181 miles!) for suspending equipment.
Over the four years of the expedition she was to cover 69,000 miles, as per the map above, most of them under Nares. He took with him his nine-year old son, William, (what a dream come true for any  intelligent child!) who was accompanied by a tutor who died early in the voyage.  The scientific team made observations, soundings and dredgings of marine fauna from hundreds of locations. Given the huge area covered, this information allowed determination of patterns of oceanic temperatures and currents as well as charting the contours of the great ocean basins.  The “Nares Deep”, in the Western Atlantic was found to be 27,972 feet, and was the deepest known part of the world’s oceans at the time of its discovery.  The expedition  was subsequently to identify the well-named “Challenger Deep” in the Marianas Trench, the greatest depth of water – 35,814 feet – on earth.
Apart from this bathymetric work, similarly important discoveries were made in the marine- biology area, over 4,000 previously unknown species being identified. For the first time on such an expedition extensive use was made of photography for recording. The management of ship, crew and logistics, so as to provide an efficient platform, distant from shore support, from which the scientists could operate, was an achievement of the highest order and one that attested to Nares’ mastery of his profession.
Nares did not stay with the Challenger expedition to the end, being recalled in in 1874 to take command of the forthcoming two-year British Arctic Expedition. The focus was on geographical exploration, scientific work being a secondary objective, with the North Pole, if at all possible, as the ultimate destination. Nares’ superb management and survey skills, and the fact that he had previous Arctic experience, made him the ideal choice.  Two ships were made available, HMS Alert, a wooden sloop of the Cruizer class and HMS Discovery, a converted whaler.
The expedition penetrated the channel between the West Coast of Greenland and Ellesmere Island – subsequently named the Nares Strait, and entered the Lincoln Sea to the north. Here Nares discovered extensive ice, disproving the theory common up to that time that the North Pole was surrounded by open sea. In the process HMS Alert reached the highest Northern latitude yet reached by any ship and one of the land parties broke man's record for the same achievement.
An unexpected problem now hit the expedition. For a century the Royal Navy had saved its sailors from scurvy by daily tots of lime juice (hence the expression “Limeys”) and during Nares’ Arctic expedition this regime was held to strictly. Inexplicably however, scurvy began to break out and became very severe, particularly among the sledging parties who were operating inland. With the situation not improving, Nares had the moral courage to abandon the expedition and to return to Britain late in 1876. Though the decision obviously saved a large number of lives, Nares was subjected to criticism for allowing the scurvy to develop in the first place, despite meticulous enforcement of lime-juice issue.

The explanation, when eventually found, absolved Nares from blame.  Large glass bottles of lime juice were known to shatter in Arctic temperatures, though smaller ones apparently did not. The response, before the expedition, had been to distil the juice into concentrate. Copper vessels had been used in the distillation process but it was not known that copper leaches Vitamin C (undiscovered at that time) and heat destroys it.  The concentrate was therefore missing the properties required and had no medicinal value whatsoever.
Nares was knighted on return from the Arctic and received various scientific honours. He was to take the Alert on one last surveying voyage, to the Magellan Straits, in 1878. Thereafter he returned to Britain and took up an appointment as Marine Adviser to the Board of Trade. His subsequent career was mainly concerned with harbour and navigation issues, both before and after his retirement from the Navy in 1886. He was promoted to Vice-Admiral while on the retired list and he continued to maintain an interest in Polar exploration, including being a committee member for organisation of Scott’s Antarctic expedition.

Nares was to live on to 1915, having witnessed, and being part of, a technical and scientific revolution. He deserves to be remembered.