The modern travel industry has brought tourists to just about every part of the world, however seemingly inaccessible. I suspect however that, though the island of St.Helena in the South Atlantic is widely known as the place of detention of the ex-Emperor Napoleon, very few tourists ever get there. I’m all the more lucky therefore that my guest blogger, Lally Brown, has not only spent significant time on the island, but has also put it to very good account in writing very authoritatively about Napoleon’s exile there. I’ll let Lally introduce with her own fascinating story and her account of the ships that visited St. Helena during Napoleon’s exile follows.

Lally Brown in her own Words 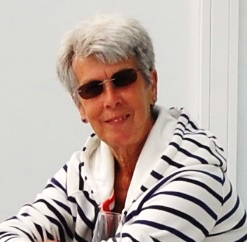 Born in Yorkshire and nicknamed ‘Lally’ by my family, I migrated south for my education and formative years. Embracing the ‘Swinging Sixties’ with naïve enthusiasm I left College at 19 and trekked overland to Israel, working on a Kibbutz for several months, and hitch-hiking around the country. This amazing (and occasionally dangerous) experience was the spark that ignited my lifelong love of adventure and travel.

A small village in West Sussex became our ‘base camp’ for thirty years as my Engineer husband took us around the globe on British Government contracts. Now, in my twilight years, we are dry-docked on the Isle of Wight surrounded by a loving family and four lively grandsons and I have the time (and inclination) to launch a series of eBooks about my exciting life. They prove that truth can indeed be far stranger than fiction. Erupting volcanoes, hurricanes, earthquakes, evacuations, abduction, drug smugglers, people smugglers, armed robbery, hangings, stowaways, bribery, corruption, political intrigues, riots, and much more.

The first in the Series is a little different. On one of our British Government contracts I found myself living on the remote island of St. Helena in the South Atlantic, in the house built in 1816 for Countess Françoise-Elisabeth (Fanny) Bertrand and her family. I became fascinated with the history and felt compelled to tell Fanny’s story, researching entirely from primary-source documents.

The result is "The Countess, Napoleon and St. Helena", a non-fiction account of Napoleon’s exile and death on the Island, as seen through the eyes of Countess Bertrand. Interspersed with Fanny’s account of life on St. Helena I have included some autobiographical chapters of my own experiences, showing how much (and sometimes how little!) life has changed over 200 years.

My second eBook "The Volcano, Montserrat and Me" will be launching soon, ready to commemorate the twentieth anniversary of the initial eruption on 18th July 1995 of the Soufriѐre Hills Volcano.

When Napoleon was defeated in the ‘Great Battle’ of Waterloo in 1815 he surrendered to Captain Maitland of the British ship HMS Bellerophon, hoping he might be allowed to live as a gentleman on an estate in the south of England. Instead he was exiled as a Prisoner of War to St. Helena, an island that had been in the possession of the East India Company since 1658.

Napoleon’s captivity was supervised from London by Lord Bathurst, Secretary of State for War and Colonies, who had complete control. It was decided that St. Helena would remain with the East India Company but that a Colonial Governor be appointed to the Island to administer Lord Bathurst’s orders concerning Napoleon.

Sir Hudson Lowe, an army officer held in high esteem by both Lord Wellington and the Prussian General Blucher, was the unfortunate individual selected for this unenviable position. Sir Hudson did not arrive on St. Helena until six months after Napoleon.

The person given immediate charge of Napoleon was Rear Admiral Sir George Cockburn of HMS Northumberland who had been on the point of sailing to assume Command at the Cape of Good Hope and St. Helena. It was his duty to convey Napoleon and his entourage to the island and to supervise the initial security.

'The Admiral will take the most effectual steps to watch the Arrival and Departure
of every Ship, so as to prevent any intercourse with the shore'.
(Bathurst, War Department 30th July 1815)

'to prevent America, or any other Nation, from planting themselves there as upon
a hitherto unoccupied and unowned Island (taking advantage of the peace to
supply themselves by shipping with Provision and Water) for the purpose of
favouring sooner or later the Escape from Hence of General Bonaparte'
(Admiral Cockburn, Commander in Chief, Northumberland, St. Helena Roads,
22nd October 1815 to My Lords Commissioners of the Admiralty)

The Ships’ List (Add.MS 20161) is full of detailed information divided into columns headed ‘Date of Arrival’, ‘Name of Ship and Commander’, ‘Where From’, ‘What Nation’, ‘Date of Sailing’, ‘Where Bound’ and a final very informative column for ‘Remarks’ which often included a long list of passenger names.

The first entry is the arrival on 14th April 1816 of the Frigate HMS Phaeton from England, with Francis Stenfell in Command. The ship brought Sir Hudson Lowe ‘and Suite’ to St. Helena. It left on 30th April bound for the Cape of Good Hope.

The following month, May 1816, saw forty-one ships anchoring off Jamestown. These included frigates, transports, East India Company ships, brigs, traders, whalers, schooners and sloops. They arrived from all over the world and they departed to as many destinations. England, Gibraltar, Madras, Resolution, China, America, Benguela, Rio de Janeiro, Bengal, Cape, Batavia, Isle de France, Mauritius, Ascension,  Amsterdam, Rotterdam and even a Whaler from Timor. Some brought troops, provisions and mail to the island, others were passing through and in need of water and fresh provisions. Many ‘homebound’ ships gathered at St. Helena to leave in convoy for England.

Worried that Napoleon might escape, Sir Hudson Lowe kept tight control over all shipping. He stated ‘It is a matter of small difficulty to procure a passage on board one of the Merchant Ships trading at the Island.’  And he had good cause to be concerned. Letters were intercepted outlining escape plans and on several occasions ‘strange ships’ were sighted and although chased were never caught.

In July 1816 instructions were given that any private trading vessel arriving from India in need of water must anchor at Lemon Valley and not Jamestown. They were forbidden from holding any communication with the island and ordered to depart as soon as they got their water.

Napoleon was always very interested in the ships arriving at St. Helena. He had his ‘Chinese Pavilion’ built on a mound in the garden of Longwood House so that he could watch distant ships approaching the island.

With Napoleon’s agreement a few passengers were granted a Pass to visit him at Longwood House. For instance when the Aslett arrived from Bengal bound for London on 26th March 1819, the cousin of Lord Liverpool, British Prime Minister, was on board. Napoleon took the opportunity of inviting him to Longwood to complain bitterly about his situation on St. Helena.

‘My detention has already cost your Government a million of money and the expenses are not likely to diminish’ he said. ‘Lord Liverpool cannot have an idea of how I am teased and persecuted by Sir Hudson.’ He continued ‘my wish is to reside somewhere in Europe and not to be kept in a tropical climate lingering with the liver complaint.’

There were many who visited St. Helena pleased to be of assistance to Napoleon. Indeed, Napoleon disposed of his Silver Plate through these means, not to possess the money (he received the equivalent of £10,000 in Spanish Dollars) ‘but with the aim of corrupting the fidelity of those whom it might be advisable to seduce’.

The ‘Remarks’ column of the Ships’ List contains some interesting comments. For example on 15th October 1817 the transport ship Friendship arrived at St. Helena, Commanded by Andrew Armet. It was bound for New South Wales, Australia, and on board were John Huss (a Settler for New South Wales), John Giles, Mrs Giles and their two children (of the Missionary Society) and ‘101 women and 4 grown children Convicts, and 30 women and 48 children wives and children of Convicts’.

When Napoleon died on 5th May 1821 there was no further need for the Governor, Sir Hudson Lowe, to keep detailed information on the visiting ships. The last entry is dated 4th June 1821, the arrival from Calcutta of the East India Company ship James Sibbald under the Command of J.R. Forbes. It was bound for London with Colonel Dunbar and a Detachment of the 66th Regiment on board.

I hope you have enjoyed this ‘soupçon’ from the Ships List, and I would like to say a huge ‘thank you’ to Antoine for graciously inviting me to Guest on his prestigious and popular Dawlish Chronicles Blog.  Lally Brown, January 2015 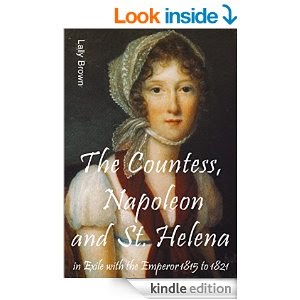 Click here for details of Lally’s book “The Countess, Napoleon and St. Helena: In Exile with the Emperor1815 to 1821”. It represents an original and valuable addition for the bookshelf of any enthusiast of the Napoleonic Era and is all the more valuable for the author’s personal knowledge of St.Helena.

Lally's second book, "The Volcano, Montserrat and Me" promises to be equally informative and enjoyable.