I was recently approached by a Dutch reader of my blog who is interested, among much else of a nautical nature, in the art of the great Age of Fighting Sail. He told me something of what he was undertaking add I invited him to prepare a blog. It turned out to be a superb one, as you’ll see from what follows, and it reflects some detective work on his part. I found that Nykle lives in the Dutch province of Friesland, in the town of Leeuwarden, near where I have family relations living – it’s a small world!  I was even more intrigued by the fact that he’s currently writing about inland navigation with which there was close family involvement in the 19th Century. I’m handing over to Nykle to introduce himself and thereafter I trust you’ll enjoy his article, and its illustrations, as much as I have. 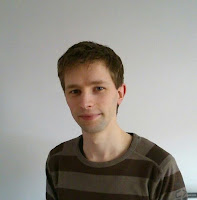 I’m a student in maritime history at Leiden University. I live in Leeuwarden (the Netherlands) and I’m 24 years old. I’m very interested in “The Age of Sail”, mainly the period 1600-1900 and I’ve written some articles about Dutch navy mariners in the Napoleonic times, about ships of the Dutch East India Company that were wrecked on the coast of Sri Lanka, about Dutch whaling history, and I’m currently writing about Friesian inland navigation in the nineteenth century.

Last year, Antoine Vanner posted a series of blogs about British naval artists of the 18th century (See links at the end of the article). Most of them are fascinating life stories; in some cases the artists based their works on their own experience during the most gruesome sea battles. Especially the turn of the eighteenth to the nineteenth century was a very intense period in terms of naval conflict. Hence this period produced some of the greatest British naval art, such as the paintings made by Nicholas Pocock. Some artists however, didn’t reach this degree of fame and were eventually lost in history.

Last year I accidentally stumbled across an original ink sketch portraying a small schooner in front of Peak Tenerife. It would be the start of a small investigation which would eventually turn into this article. It’s a story about a rather unknown naval artist who almost fought at Trafalgar but ended up making beautiful drawings of naval life just outside the spotlights.

Thank you Antoine for giving me the stage. 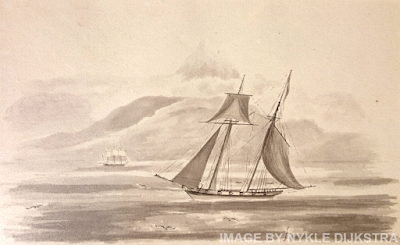 The sketch mentioned above was accompanied by a few old written pages. I googled a fragment of the text and found out that the drawing was used for a (slightly altered) engraving in the Naval Chronicle in 1818. This was the same magazine in which Pocock placed many of his drawings. The Tenerife Peak sketch was said to be made by a man called “J.E.” Two ships were added, perhaps to make it more appealing to the audience. 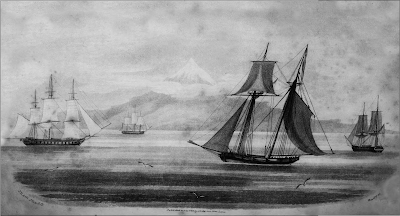 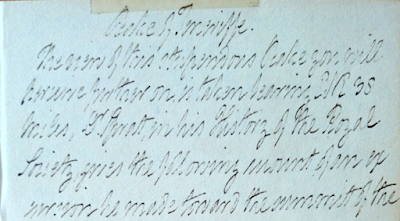 A piece of handwriting which was included with the drawing of Teneriffe Peak. Perhaps it’s Evans, handwriting?

As I found out, “J.E.” made many more drawings and he also was a frequent correspondent to the Chronicle. One of the drawings stated that “J.E.” was a navy lieutenant. Interesting information, but still, his true identity was never revealed. Therefore, I decided to gather all his drawings and letters and combine them to get a better view of the author. In the end I found two biographies about a naval officer named John Evans. His career and the ships on which he served matched rather well with the drawings, and the story actually mentioned that Evans was a skilled artist. Bingo! Although we don’t have 100% certainty, it’s highly likely that J.E. was John Evans. 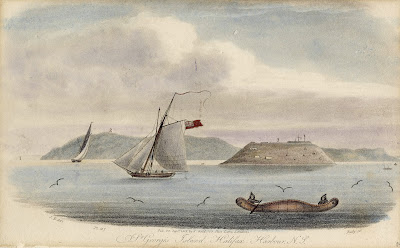 According to the biography, John Evans was born on 2 December 1786 or 1787. He was the son of John Evans, Esq., of Dilwyn, co. Hereford, and of the Rock and Vermont, in Jamaica, by a daughter of John Tyler, Esq., of Dilwyn House, who was grand-niece of Bishop John Tyler, and a relative of Robert Southey, the Poet-Laureate (who would later write what was for many years the standard biography of Nelson). Evans entered the navy in 1803, but the two biographies differ from each other about the first ship on which Evans served. One says it’s the Leviathan (74 guns) but the other one names HMS Leander (50 guns). Evans speaks about the Leander in the Chronicle, but it’s also probable that he only came aboard the Leander in 1805. In a letter accompanied to a drawing of St. George’s Island, J.E. wrote:  “They [the Native Americans at Nova Scotia] are extremely expert in the management of their little barks, and will impel them through the water only with the aid of two small peddles, with inconceivable velocity; a six-oared deal gig, with a stout crew, belonging to the Leander, of 50 guns, could never pull against one of them with anything like success.” 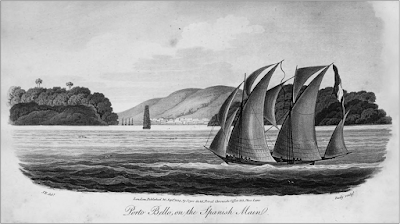 A view of Porto Bello [or Portobelo] on the Spanish Main. The French ship we see here is of a Mediterranean type called ‘xebec’. Ronald Hakwins (Cornwall Maritime Museum) was so kind to take a closer look on the drawings and pointed out that although the drawings are correct, some of the engravings are a bit inaccurate. For instance  the mizzen on this xebec is drawn on a boom over the stern without a mast to support it. Maybe the engraver took some artistic liberty.  (Naval Chronicle, Volume 32, 1814) 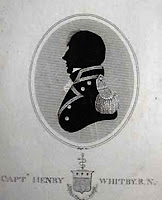 Evans allegedly joined the ships Trent (36 guns) and Desirée (36 guns). In the Desirée he was present at the blockade of Cape François, the reduction of Port Dauphin, where two forts and a 28-gun frigate, La Sagesse, were taken from the enemy, and the surrender of the French squadron with the remains of General Rochambeau’s army from Cape Francois on board; and he was also frequently employed with the boats on cutting-out affairs of ‘a very hazardous description’. The captain of HMS Desirée was Henry Whitby, who may have been some kind of patron, as Evans followed him in 1805 to the Centaur. This ship then sailed for Jamaica to join Nelson in his pursuit of De Villeneuve, but she encountered a hurricane and only just made it safely to Halifax. Whitby was then given command of HMS Leander, and it could be possible that Evans joined him again. 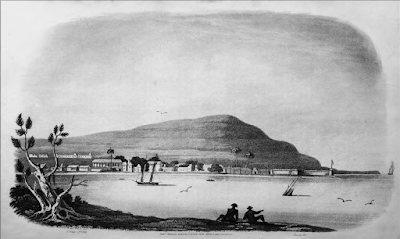 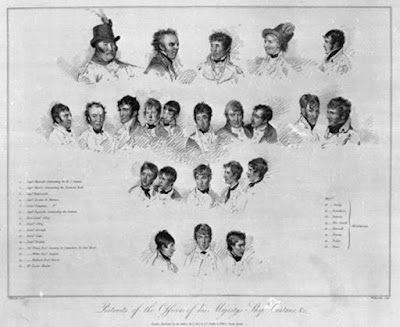 Officers of HMS Centaur. Unfortunately Evans is not among them, but he came aboard in June 1805 and the hurricane happened in July, so he probably was aboard at the time. Maybe the artist John Eckstein gave Evans a few drawing lessons but that’s mere speculation. 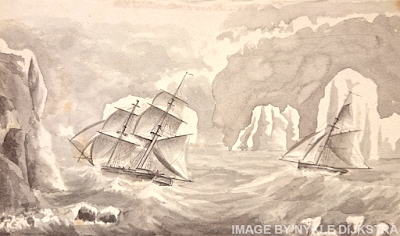 I later found two more original drawings by John Evans. This one shows a brig and a small cutter in a storm. No doubt Evans experienced similar moments, and probably even much heavier gales. As far as I know this sketch was not used for the Naval Chronicle.

In 1807 John Evans shortly became a prisoner of war when he sailed as a passenger on an armed brig, but he was soon released. He then joined the sloops Drake and Wolf. A short time later he served on HMS Bacchante (20 guns) under captain Samuel Hood Inglefield. He saw quite a lot of action with this ship and even succeeded in the capture of the French brig Le Griffon (16 guns): 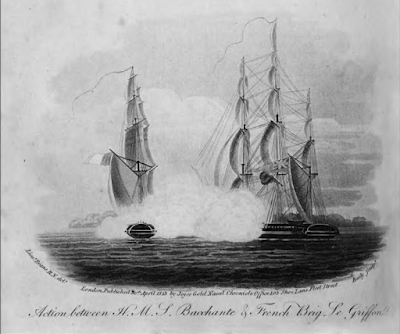 Sometime in 1808, Evans followed Inglefield to HMS Daedalus (32 guns). In this ship he served until September 1810 and contributed to the reduction of the town of Samana, in St. Domingo. During his service aboard this ship he may have encountered another hurricane, by which the ship was struck on the 3rd of august, 1809. This happened in the vicinity of St. Domingo when the ship sailed in a squadron with the navy ships Lark and Moselle. The gale was first felt by the Daedalus. The wind on the 2nd of August was variable and the atmosphere was hazy. At half past eight P.M., the gale commenced with very dark and gloomy weather, and bright flashes of lightning, though without thunder. At nine it had increased to a heavy gale, with a very high sea. The bowsprit, foremast, main, and mizzen topmasts went over the side. Several fruitless attempts were made to save the ship, when at last most fortunately she was kept before the wind and sea. The ship must inevitably have been lost if the wind had shifted on the evening of the 2nd to the South or South West. The Lark, less fortunate than the Daedalus, foundered with her captain (R. Nicholas), officers and crew. Only two hands were saved in an extraordinary manner after being picked up at night by the Moselle. 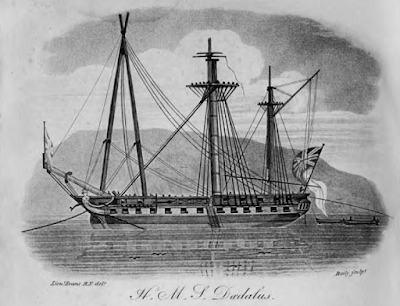 Naval Chronicle, Volume 29, 1813
In 1810-11 Evans was employed on the North American station. First in the Belvidera (38 guns), bearing the flag of Rear-Admiral Herbert Sawyer, and then in the sloops HMS Atalante and HMS Morgiana under Captains Frederick Hickey and David Scott. 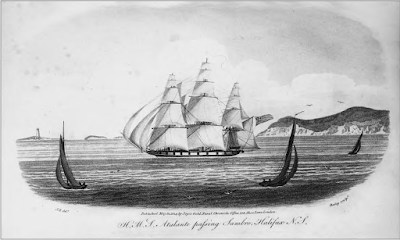 Evans was promoted to the rank of Lieutenant in the latter vessel on 16 November 1811; but in February 1812 he retired from future service due to a severe liver complaint, from the effects of which he would suffer for the rest of his life. Back in England, he may have sent his drawings to the Naval Chronicle as that’s when his first sketches were published. In spite of his disease he would become a frequent correspondent to the Chronicle. In 1824 he even published a book about hydrography. About his personal life the biography says he was married and had one son (also a naval officer named John Evans) and one daughter. 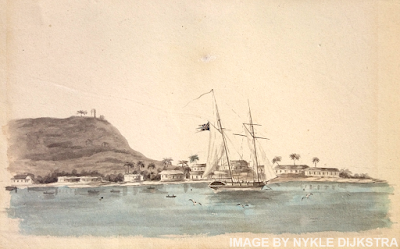 A third sketch by John Evans, showing Needham’s Point, Barbados. This drawing was used in the Naval Chronicle, and just like the Tenerife Peak drawing it was slightly altered (see below).  The ship (a topsail schooner) looks very similar as the ship on the drawings of Tenerife Peak and Nichola Mole. Could it be the same? 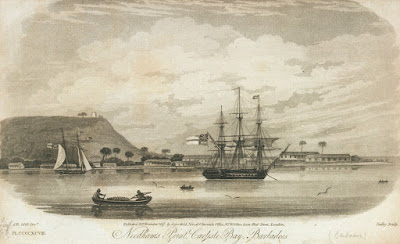 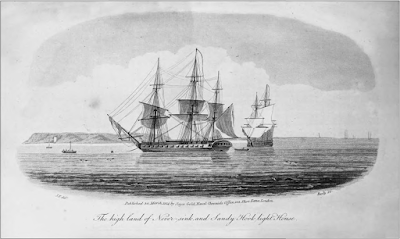 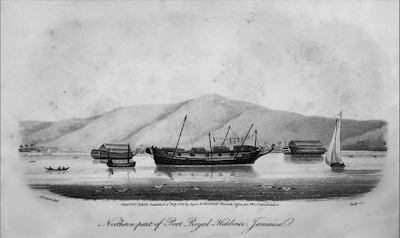 Many thanks to Nykle for his splendid article – and for contacting me in the first place. He’s obviously a man to look for in the future in the sphere of nautical history.
Antoine Vanner