French liners in WW1 – slaughter in the Mediterranean

October 4th was the one-hundredth anniversary of the sinking of the SS Gallia, one of the worst maritime disasters of the First World War.  What made it even more terrible was that this was one of four similar tragedies, each involving troopships, each involving very heavy loss of life. It also underlines the fact that the closed waters of the Mediterranean became a happy hunting-ground for German and Austro-Hungarian U-boats in those years. Without effectively escorted convoys, and in the absence of effective submarine-detection technology, highly vulnerable Allied shipping was offered up likes lambs to the slaughter.

The Salonika front, on which British, French and Serbian troops faced Bulgarian and German forces in Macedonia, is all but forgotten today. Though it absorbed large numbers of troops, who sustained serious losses through disease, it saw only intermittent though bitter and inconclusive fighting in 1916 and 1917. A major Allied offensive was to be unleashed successfully from it in the last months of the war. Established in October 1915, this front tied down a vast number of troops – by 1917 no less than 24 divisions were deployed there: six French, six Serbian, seven British, one Italian and three Greek, plus two Russian brigades. Supply had to be by sea, necessitating a heavy commitment of troop and hospital ships, plus innumerable cargo vessels, to maintain a long and vulnerable supply line that led primarily to France.

Large pre-war liners were ideal as troopships due to their large passenger capacity and the high speeds which were likely to make them difficult targets for U-boats. Four of these were to be sunk with heavy loss of life, three of them while supporting Salonika.

Built in 1905, the SS La Provence was a 13,700 ton, 625-foot liner employed on the North Atlantic route. Peacetime accommodation was for some 1500 passengers of all classes, making her ideal for conversion to trooping duties. Her best performance on the Havre to New York run was at a very respectable average speed of 21.63 knots. On 26thFebruary 1916, en route to Salonika with some 1700 troops on board, she was sighted off Cape Matapan in Southern Greece by the German U-boat U-35. This craft, which was to clock up a fearsome record of 224 Allied ships sunk, mainly by gunfire, was commanded at this period by Lothar von Arnauld de la Perière (1886-1941), the most successful submarine commander in history. He launched an immediate torpedo attack, as a result of which La Provence began to list immediately, so much indeed that half the lifeboats could not be launched. She sank quickly, the bows rising perpendicularly before the final plunge. Of the 1700 men on board – it is an indictment of the management of the trooping operation that exact numbers are unknown, and were initially estimated as higher – there were only some 700 survivors rescued by British and French vessels eighteen hours later.
Next to go was the SS Gallia – the hundredth anniversary of whose sinking this article marks. This 15000-ton, 570-foot liner was new, having entered service on the Bordeaux to Rio de Janeiro and Buenos Aires route in 1913 and being taken over by the government when war broke out in 1914. In the aftermath of the La Provence sinking it appears amazing that she should have departed Toulon without an escort on 3rd October 1916, with some 2,350 on board, of whom 2000 were French and Serbian soldiers. The following day, between Sardinia and Tunisia, the Gallia was spotted by La Provence’s nemesis, von Arnauld de la Perière in the U-35. He fired a single torpedo which not only hit but also triggered a larger explosion of a cargo of munitions also being carried by the liner. Damage to the radio facility prevented issue of a distress call and the Gallia began to settle quickly. A degree of panic appears to have reigned and some boats capsized after launching as hundreds more men threw themselves into the water. The Gallia was gone n fifteen minutes but it was to be another day before up to 1,200 survivors were picked up by the cruiser Châteaurenault. Once again, due to what appears to have been chaotic record keeping, and uncertainly as to actual numbers on board, the total loss of life was estimated to have been be somewhere between 600 and 1800. The French Republic was indeed prodigal – and uncaring – with the lives of her soldiers.

An irony was that the Châteaurenault had been built with a profile like a liner so as to make her seem less suspicious when employed in commerce-raiding. She herself was to be sunk by torpedo in December 1917, with limited loss of life. A further irony is that though the loss of life in the Le Provence and Gallia sinkings was vast, the U-35 commander, von Arnauld de la Perière, was well known for scrupulous adherence to prize rules, allowing crews of enemy merchant ships – as opposed to naval craft, which these liners definitely were – to board their lifeboats and giving them directions to the nearest port before sinking their ships.
The third Salonika-related trooping tragedy was to come just four months later. This time the victim was to be the SS Amiral Magon, a smaller (5600-ton, 390-foot) liner that had been in passenger service between France and Indo-China from 1905 until the outbreak of war. On 29th January 1917, in company with another troopship and with a destroyer as escort, and carrying some 935 soldiers, she was torpedoed by U-39 south of Greece. She sank in ten minutes, with loss of 203 men. An added horror of this disaster was that the Amiral Magon was also carrying horses. One’s mind recoils from imaging the terror in which these innocent and trusting beasts must have died below deck.
A further French troopship tragedy involved a brand-new ship, completed after the outbreak of war, the 12,700-ton, 530-foot SS Athos. Only three weeks after the loss of the Amiral Magon, on 17th February 1917, the Athos was sunk east of Malta by U-65. Some 2000 in total were on board, including Chinese labourers (recruited for manual labour close to the front), Senegalese troops and civilians, including women and children. She also went down quickly – in less than a quarter of an hour – and she took with her 754 people with her. The survivors were picked up by two escorts.
When confronted with such high losses, as in these cases, it’s very easy to see them as statistics. And yet each individual who died represented a separate tragedy, a life cut short, years and decades of sorrow – and often as not of financial hardship - for those left behind. And now, a century on, they are forgotten, few of their details known even to great-grandchildren. 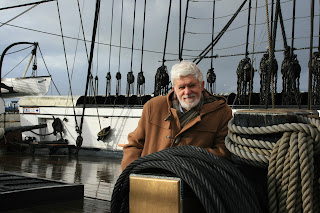 If you are not already familiar with my website, www.dawlishchronicles.com, you may well find it worth a look. It provides background on my books and on myself – including test, audio and video interviews, as well as almost 200 articles in its “Conflict” section, which deal with naval warfare and other history in the period 1700 – 1930. Many of these articles are expansions of blogs items from the last three years and they are arranged chronologically in three sections – “The Age of Fighting Sail”, “The Victorian Era”, and “The Modern Period 1901-1930”. There’s also a short biography of Nicholas Dawlish – protagonist of the Dawlish Chronicles series, and this is added to as each new novel is published. The next, due very shortly, is Britannia’s Amazon. I’m always keen for feedback from readers and the website has a facility for queries.  Happy browsing!