Though I write about naval adventure the latter part of the 19th Century I remain fascinated by the Revolutionary and Napoleonic Wars era – the Great Age of Fighting Sail. Like so many, my interest was first aroused by reading Hornblower when I was a boy and several fine authors, including Patrick O’Brian, have followed splendidly the precedent originally set by C.S. Forester. On occasion however one does wonder if heroes of series fiction have a succession of exploits that are just a little too unlikely, given just how much action they see in their careers. But the truth, when investigated, is often more extraordinary than the fiction.
Here’s a record of what a single Royal Navy officer could achieve in the course of his career. This extract from Brenton’s “Naval History of Great Britain” deals with the career of Captain Philip Browne in the Napoleonic period. Jack Aubrey’s pale by comparison and indeed Patrick O’Brian might have made is hero less successful that his real-life counterparts!

“The history of the exertions of this officer in the cause of his country, from the first moment of his entering the naval service, would fill a volume. His watchfulness and activity were never surpassed: his promotion to the rank of post-captain he owes to himself. During the time that he commanded the Swan, hired cutter, the Vixen, gun brig, the Plover, sloop of war and the Hermes, 20-gun ship, he captured:

In the performance of these duties, Browne produced a clear profit to the revenue of £47,215. He had taken 886 French prisoners and sent 217 able seamen to the fleet. If we add to these the number of vessels recaptured, and the number save from capture by the destruction of the enemy’s privateers, we shall find that his officer proved himself a very valuable servant of the crown.”

The above does not however mention the fact that Browne appears to have been court-martialled in 1814 for seven charges “abusive and fraudulent conduct” brought against him by his Lieutenant on the Hermes. Browne was dismissed from the service.

HMS Hermes was a 20-gun sixth-rate launched in 1811 and burned in 1814 during a highly unsuccessful attack on Fort Bowyer at Mobile Point, Alabama 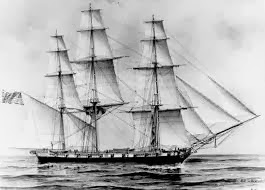