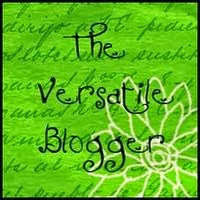 My writing-friend Alison Morton has successfully combined the genres of hard-boiled thriller and alternative-history. She has created a convincing and internally consistent parallel universe in which a fragment of the Roman Empire, Roma Nova, has survived into modern times, not only remaining faithful to Roman values but also adapting to scientific and technological progress. If you haven’t yet read any of Alison’s fiction (I’ll provide a link at the end) then you’ve got a treat in store.

Alison has now nominated me as a “versatile blogger” – a way for practitioners to introduce their readers to new blogs. There are some wonderful ones out there, and about the most amazing subject”

So, what was I asked to do?

1. Display the logo
2. Write a post and link back to the blogger who nominated me
3. Post seven interesting things about myself (am I that interesting?)
4. Nominate up to fifteen other bloggers (and why I’ve nominated them)
5. Inform them of their nomination

So here are seven things about me:

I got addicted to reading as soon as I could read.  I loved Dickens and Thackery and Robert Louis Stevenson from a very early age (BBC TV dramatisations whetted my appetite), devoured Captain Marryat’s novels, adored Jules Verne and read just about all of Louis de Wohl’s historicals in my summer holidays when I was 13.  Later I was delighted by Hardy, Dostoyevsky, Tolstoy, Pasternak and Hardy. Thanks to my father I became a H. Rider Haggard and Hornblower junkie when I was 11 or 12 and I saw the same happen to my daughters when I introduced them in due course.

I’m bilingual in English and Dutch. I’m told that I come across as lighter-humoured in Dutch – why, I don’t know. I’ve got reasonable Spanish and rusty (read “awful”) German.

I’ve lived and worked long-term (two years plus) in nine countries and did shorter assignments in at least as many again. I’ve visited over 50 nations and every continent except Antarctica (maybe some day…)

I spent almost eleven years in Sub-Saharan Africa, mostly in Nigeria, a country I love.  I’m still involved with a village development project in Tanzania and I spent time there eighteen months ago. I’m rather proud of having been warned by some beefy associates of a certain African dictator (who recently celebrated his 91st birthday) that “the boss didn’t like what you said” at a conference where he was a guest of honour. My love of Africa is to be attributed to my father – who never set foot there – and to his recommendation of Rider Haggard!

I’ve been on the seabed of the Gulf of Mexico – and without a diving suit! You must work that one out for yourself!

I’ve been fascinated by history and military history all my life. My major period of interest is from 1700 onwards, with special interest in the nineteenth century, but reading widely in other eras as well. Technological development – including that at sea – and its influence on broader historical trends entrances me.

Since boyhood I’ve loved epic narrative history – Prescott, Parkman, Motley. Churchill’s Marlborough is a delight to return to again and again and Shelby Foote’s “Civil War” must count as one of the finest, and most inspirational, books of the twentieth century.

And some versatile blogs I admire ...

In my turn, I nominate a versatile selection of bloggers for you! click on the italicised titles to link directly, or so so on the sidebar to the right, where you’ll find links to  other  excellent ones as well,

1.  “A Covent Garden Gilflurt’s Guide to Life” comes from the fashionable salon of the Georgian hostess  Madame Gilflurt, a.k.a. Catherine Curzon. It deals with every aspect of 18th Century life. As she publishes several times a week, one marvels how this lady (and, let’s face it, gadabout) can find the time between dishes of tea and whispers behind fans to produce her unfailingly delightful missives.

2.       The "Old Salt" blog by Rick Spilman deals with every aspect of nautical activity both past and modern. His articles are frequently very topical and up-to-the minute and particularly interesting are his postings on the last decades of merchant sail.

3.       Linda Collison and her “Sea of Words” blog. Linda is herself a novelist (among umpteen other activities and careers) and her blog and always entertaining. At times you’ll also pick up parts of Linda’s own story – which is an epic in itself.

4.       The historian and novelist Joan Druett is responsible for “The World of the Written Word” blog. Like all the best blogs, you’re never sure what’s going to turn up next as it covers aspects of nautical history and the craft of writing, as well as broader musings.

5.       The “Ersatz Expat” blog is completely different  to any of the foregoing. It deals, often with considerable humour, with the challenges of an expatriate lifestyle, including having and rearing children while moving from one country to another and accommodating to new cultures and customs. Even if you intend never to live in locations as exotic as Borneo or Kazakhstan you’ll find it entertaining.

6.       “EnglishHistorical Fiction Authors” is one of the most impressive blogs of all, delivering an article on some – always unexpected - aspect of history, day in, day out. There are huge numbers of contributors and the subject matter reflects this. Not to be missed!

7.       “Forceswith History” by Robert W. Mackay, deals with aspects of Canadian military and naval history. These are topics not well covered in the British or American blogosphere and Mr. Mackay’s blog is all the more valuable for that reason.

8.       “The CujoCat Chronicles” consists of the musings of a very intelligent (and handsome) cat who is often critical and often bemused, by the antics of the two-leggers in the pride of which he is unchallenged master. Well worth dropping in on now and again.

9.       Since I’m fascinated by all things Ottoman I welcome Kathryn Gauci’s blog. It deals with Turkish and Greek themes. It’s a relative newcomer and I look forward to it thriving.

10.   “Adventures in Historyland" lives up to its name with articles, often long, on interesting aspets of major events. It’s like an on-line history magazine and one of the best of all historical blogs.

And lastly, let me not forget Alison Morton’s own splendid “Roma Nova” blog, which focusses largely, though not exclusively on Roman history. It’s as much a delight as Alison’s own novels (Click here to learn more). And thanks to Alison for alerting me to this particular blog hop! It’s been fun participating.
Posted by Antoine Vanner at 14:11