In my blog last week I described Fort Cornwallis, at Georgetown, the main city on the island of Penang off the west cost of Peninsular Malaysia. Though built in the early 19th Century to deter French attack, it was never to experience direct assault – a measure indeed of its value as a deterrent. It was however to be the witness to a spectacular battle directly before its walls over a century later, one that involved a foe that was undreamed of as a menace by the original builders. And three decades thereafter it was also to see a most unexpected naval group based in the harbour that it was designed to protect.

When war broke out in Europe in August 1914, Penang must have seemed to be an unlikely battleground. German and Auto-Hungarian naval power was almost entirely concentrated in European waters and though limited German cruiser units were scattered  around the globe (Click here for more details), the most direct threat in the Indian Ocean, the cruiser Konigsberg, based in Tanganyika, East Africa, was quickly bottled up and neutralised, if not yet destroyed. The most powerful single German naval force overseas was the East Asiatic Cruiser Squadron, based in China – which seemed very far indeed from the by-then sleepy anchorage of Penang which had been overtaken in importance by nearby Singapore. The bulk of the East Asiatic Cruiser Squadron was to disappear into the Pacific, only to reappear off the coast of Chile in late October (Click here for details of the Battle of Coronel) but one of its ships, the light cruiser SMS Emden, was detached to create havoc in the Indian Ocean.

The Emden was a Dresden-class cruiser which entered service in 1909 and spent most of her pre-war service in the Far East. Of 4268 tons and 388 feet long, her main armament was ten 4.1-inch guns and – significantly, as it would later prove – two 18-inch torpedo tubes.  For two months she ranged freely over the Indian Ocean, capturing more than twenty merchant ships, with scrupulous attention to preventing loss of life by their crews, and bombarding oil-storage tanks at Madras, India. Her “Will o’ the Wisp” appearances in the Bay of Bengal, then south west of Ceylon (Sri Lanka) towards the Maldive Islands, then south towards the Chagos Archipelago, necessitated deployment of significant British forces, supplemented by smaller French, Japanese and Russian ones, to hunt her down before she could inflict damage on troop-reinforcement convoys coming from Australia. The chivalrous behaviour of her captain, Karl von Müller (1873-1923), and his rigorous observation of internationally-recognised rules of commerce raiding so as to minimise loss of life, made him almost as much a hero to Germany’s enemies as to Germany itself.

In late October Müller shifted his area of operations again eastwards, towards the coast of Malaya, with the intention of moving south towards Sumatra thereafter. His first objective was to be Penang, where his unexpected appearance could be relied upon to cause further confusion for Allied search-plans. To enhance the surprise element, and to aid uncontested entry to the anchorage there, he caused a dummy funnel to be erected. This, in addition to the Emden’s own three funnels would give a superficial resemblance to one of the British “Towns Class” light cruisers hunting her.

The anchorage off Georgetown, on Penang’s east coast, was thronged with shipping (see diagram bllow from an American newspaper of the time), including several light French naval vessels and the newly-arrived Russian protected cruiser Zhemchug (also spelled Jemchug in the western press). 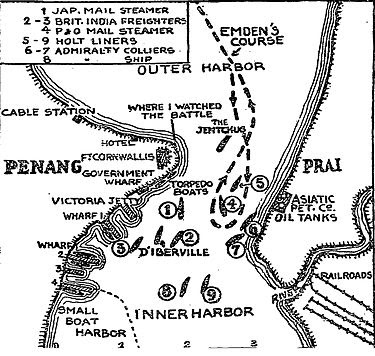 The Zhemchug appears to have been one of those rare vessels that have been unlucky throughout their entire careers. Built at St. Petersburg as one of the two-vessel Izumrud class, this 3100-ton, 365-foot protected cruiser, she  had entered service in 1904, just in time to join the Russian Baltic Fleet’s doomed voyage to confront the Japanese navy off Korea.  Conditions on board were abysmal with extra coal stacked crew accommodation, poor ventilation, limited food, heat-stroke vulnerability and frequent machinery breakdowns.  When the Russians finally faced the Japanese in the Tsu-Shima Strait between Japan and Korea the Zhemchug, scouting ahead, was to be one of the first vessels to open fire.  She was to sustain serious damage, but unlike the vast majority of Russian vessels sunk or captured in this battle of virtual annihilation, she did manage to escape, ending up interned by the United States at Manila, in the Philippines, until the end of the war. By late 1905 she was back in Russian service, only for her crew to mutiny in Vladivostok as part of the failed Russian Revolution of that year. With order restored, she was to be based at this port in the following years though continuing mechanical unreliability limited her to short patrols.

In May 1914 the Zhemchug  was given a new captain, Commander Baron Ivan Alexandrovich Cherkassov, an appointment that was to prove catastrophic. As the Emden’s depredations spread, he and his cruiser were assigned to support Allied efforts to run her down.  It was somehow ironic, given her pervious history, that Zhemchug  should be partnered with the Japanese Navy’s cruiser Chikuma to search in the Bay of Bengal. Given Zhemchug’s record of poor serviceability this assignment appeared somewhat optimistic, and when she arrived in Penang on 26th October it was for repairs and to clean her boilers.

Assuming that the Emden must be far off, and against the advice of the commander-in-chief of the Allied Fleet, a Royal Navy Admiral, Zhemchug’s Commander Cherkassov gave the majority of his crew shore leave, and left the ship anchored a short distance from shore. Other than twelve ready-use rounds stowed on deck, all shells were locked away and all torpedoes disarmed. Cherkassov himself then repaired to the magnificently luxurious Eastern & Oriental Hotel (still extant – I was there last week A.V.) where he was to entertain a lady who, according to some accounts, may have been his wife. Considering the lead given by their captain it can hardly be expected that the crew members remaining on board were particularly alert.

Just before dawn on 28th October the Emden sailed boldly from the north into the Penang anchorage, unchallenged due to her disguise. Had she been efficiently manned, the Zhemchug could have been a worthy opponent since her armament – eight 4.7-inch guns and four 18-inch torpedo tubes arguably gave her a slight superiority. As Emden approached the still unsuspecting Zhemchug, Captain Müller ordered the German colours to be run up and fire to be opened at point-blank range. As she passed the Russian vessel Emden launched a torpedo, hitting her aft. Limited as they were by shell-availability, the Russians opened an ineffective fire, hitting a merchant ship anchored nearby. Emden arced around to reverse course so as to leave the anchorage by the way she had entered. As she passed the stricken Zhemchug she fired a second torpedo, this time hitting her below the bridge. This was the coup de grace – the Russian cruiser broke in two and sank, taking 89 men with her and leaving another 143 wounded. As she made her escape Emden was pursued by one of the French destroyers present – their state of readiness does not seem to have been much better than the Russians’. This small craft, the Mousquet, was quickly overwhelmed by the Emden’s guns.

The Emden’s retreat encountered no further opposition but her days were numbered. On 9th November she was run down and destroyed by the Australian cruiser HMAS Sydney at the Cocos Islands, south of Sumatra. During her three-months cruise Emden had sailed 30,000 nautical miles and had sunk or captured over 70,000 tons of Allied shipping. Karl von Müller was brought to Britain as a prisoner of war, and while there led a breakout, though he was subsequently recaptured. He died in 1923, at the tragically young age of 50, as a result of malaria-associated illness dating from his days in the tropics.

The Emden’s daring attack was not however to be the end of German naval involvement with Penang. In 1942, as Japanese forces advanced through the Pacific and South-East Asia, the idea was mooted in Germany of sending U-Boats to the Indian Ocean to operate together with Japanese units. The proposal may have had some value in publicity terms as regards emphasising unit of purpose within the Axis but the logistics involved were formidable. Refuelling would be essential for units sent from Germany – by necessity by the Cape of Good Hope route – and this would require stationing of submarine tankers off Brazil and surface units in the Indian Ocean. By the time that the plan was implemented in 1943 the Anglo-American navies were gaining the upper hand in the anti-submarine war and the “Gruppe Monsun” force of German U-boats was to suffer a horrific casualty rate. The first step was to send large Italian-origin submarines to establish a base at Penang and thereafter seventeen U-bats were sent to follow in two waves. Of these only five reached Penang due to Allied air attack en route and to Allied submarines stationed off Malaya in response to decrypted information on German movements. A further eight U-boats reached the Far East thereafter. At the time of Germany’s surrender in May 1945 the six U-boats still in Japanese-controlled area were taken over by the Japanese Navy.  Some successes were scored by the Penang-based U-boats – including sinkings as far south as off Fremantle in Australia, but the gains were totally disproportionate to the resources squandered in what was largely a propaganda-motivated campaign.

And in Penang today no memory seems to remain of the fact that the Nazi Reichsmarine once had a base there. Sic transit…

To see a short video interview with me about my approach to writing and my interest in the 19th Century please click here.